“Damn I hope that Gathering Of Kings will turn into a real band in the future!” That’s how I ended my review of GoK’s brilliant debut album First Mission last year. Apparently the God of Rock answer prayers because that is exactly what this Swedish version of Phenomena has turned into. Fantastic news. My guess is that they turned into a band more or less right after the success they had at Sweden Rock Festival last summer. A killer gig, it was. Only a little more than a year after the release of the debut, GoK is about to release their second outing – this time with a slight change of personnel. Chris Laney (guitar – Pretty Maids), Björn Strid (Night Flight Orchestra, Soilwork – vocals), Jens Westin (Corroded – vocals) and Richard Larsson (keyboards – Night Flight Orchestra) has all bid their farewells. New on the singer spot is instead Jonny Lindqvist (Nocturnal Rites). But just like on the debut, it’s Saffire’s Victor Olsson who provides the music – with a helping lyrical hand from Helldog singer Alexander Frisborg – which indeed bodes well.

From afar, a very small bell rang when I read the name DeCarlo. I thought I must have read the name in some review, article or interview somewhere but I couldn’t figure out from where. It was first when I read the press-release for DeCarlo’s debut album that I found out that lead singer Tommy DeCarlo is the lead singer in Boston – and has been so since 2007. I admit, I’m not the world’s biggest Boston fan, but it’s hard to look past the fact that the band’s 1976 debut album is nothing short of a true Rock classic. I quite like the two follow-ups as well and the fact that the band has sported numerous of great hits is indisputable. But when it comes to Boston, I’m not that well-informed and that’s probably why I really wasn’t aware of DeCarlo being the Boston singer. I did however reviewed Boston’s latest effort Life, Love & Hope (2013), but that was seven years ago plus it did include several other singers and I didn’t like the album at all, so I had probably just forgotten about it.

Since I write every review on this site myself and I only write on my spare-time, there are records that I usually ignore – because there’s only 24 hours in a day. Compilation albums, re-releases, re-recordings and live albums usually never makes it online here. But there are exceptions whenever I see fit. This album is one of those exceptions. Why? Well, because this album has meant shitloads to me since the day it was released back in 1986. I discovered Easy Action in 1984 when they were still a Glam Rock band and featured vocalist Zinny Zan (Shotgun Messiah, Stagman), guitarists Kee Marcello (Europe, Red Fun) and Chris Lind (who called himself Lynn back then), bassist Alex Tyrone (Sha-Boom) and drummer Freddie Von Gerber (who went by the name Van Gerber, also in Red Fun and Rat Bat Blue) because of a documentary / live gig that was sent on Swedish television and I was struck right off the bat.

“Lovekillers marks Tony Harnell’s return to the soaring vocals and Melodic Hard Rock sound of the 80’s TNT albums. It is an over-the-top and straight ahead way to embrace the classic 80’s sound and bring it back with passion and the amazing vocal register that only Harnell can deliver.” This is an outtake from this album’s press release. They also mentioned then albums Tell No Tales (1987) and Intuition (1989). Now, I’m a fan of TNT – but I am a HUGE fan of those two albums. Could this album actually be something similar to those records – both in quality and in sound? Sounds too good to be true, if you ask me. The thing is, neither Harnell or TNT has brought us any masterpieces without each other and I truly believe that the only way for the two parties to create anything that shakes my world is to create music together. But after what, three, four splits, those chances are slim – and then some!

As of lately, many Scandinavian AOR releases, without naming any names, has left underwhelmed. Not bad – they are all very well produced, clean-cut with big sound-scapes and as for the musicians, well, it’s really hard to find bad ones within the genres of AOR and Melodic Rock. I can’t even say that I don’t like the songs because, for the most part, I do. It’s just that so many of them sound the same, sometimes to the point where it’s hard to tell them apart. But that’s not me saying I don’t like or have grown tired of AOR per se, no I still love all the classics but for the last few years, very few new AOR releases has moved me enough – and therefore the high scores has been absent as well.

I first thought that Age Of Reflection were a Power Metal band. The album cover-art and the name suggested that. Then it struck me that the acronym for Age Of Reflection is AOR. And they’re from Sweden. Hmmm. Reading the press-release for this album, this is a band working in those territories. Now, when it comes to Scandinavian – and especially Swedish – AOR acts, inflation has struck. For a while, new bands kept popping up from everywhere and even though none of them were bad per se, they were all sporting the same soundscapes. For a while I had four new AOR records, all hailing from Sweden, on my phone and when I played songs randomly it was actually hard to tell them apart – sound, arrangement, production. And they all sound extremely slick and polished with keyboards taking over and with little to no crunch, grit or edge whatsoever. So my first thought was, “ok, another Swedish AOR act…” 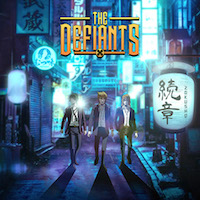 When The Defiants – Paul Laine (vocals), Rob Marcello (guitars), Bruno Ravel (bass) – released their self-titled debut back in 2016, I really had no expectations at all. Since The Defiants are more or less a Danger Danger spin-off – Ravel’s a founding D2 member, Marcello is their current guitarist and Laine replaced Ted Poley in D2 back in 1993 but when D2 reunited in 2004, they went with Poley again – and I was never a fan of the band, I thought I’d might find a couple of good songs on it but not more. Much to my surprise, that album grew to be one of the best AOR/Melodic Rock releases of 2016. Not that the band did something revolutionary – I never cared much about those things – but what they did provided us with was, for the most, brilliant poppy rockers with catchier than catchy melodies and spot-on choruses from start to finish and a clean and slick production that still rocked. That’s how you make my clock tick!

Jimi who? Not to come across as an asshole but I have never ever heard of this guy. Apparently, Jimi formed this band back in 2015 with guitarist/bassist/programmer/producer/engineer Sandy Jones and together with guitarist Greame Duffin, they released their debut album Longtime Comin’ back in 2017. Born in Scotland, Anderson sang in his first band – a cover band – back in 1978, doing stuff by Deep Purple, Rush and others and as influences he cites Paul Rodgers, David Coverdale and Ronnie James Dio. Fronting the band Sahara, playing clubs, they were picked up by Wet Wet Wet’s manager Elliott Davis when the name had changed to The Hardline, who offered them a managing contract after hearing their demo. But except for a tour opening for Wet Wet Wet (a very underrated band, btw) nothing really came out of that deal, which meant no records from The Hardline.

When I read the press releases that comes with the reviewer’s download/streaming links of bands that are completely new to me, I sometimes feel like I have been living under a rock for my entire life. There you can read about the bands’ previous releases, how much and with whom they have toured, what a big fan-base they have and how inspirational they have been for other bands in the same genre. They’re all exaggerated, of course, but for a dude who has been told more than once by more than one human being that I’m a music-geek, I can’t help to wonder why on Earth I didn’t know about this and that band. I mean, I should have at least heard about them. Read about them somewhere. Their name really should ring a, at least, small bell. Why I’m writing this in this review is of course because Soleil Moon is such a band.

“What if”. Sometimes I wonder if the members of Unruly Child have asked that question throughout the years. What if their debut was released back in 1989 instead of 1991. Even if Grunge hadn’t taken a hold of the Rock scene just yet by then, it was there and on its way up and also, Unruly Child’s kind of AOR was not the big thing anymore. In 1991, even Melodic Rock and everything that branched out from that had gone harder, rowdier and grittier due to the success of bands like Skid Row and Guns N’Roses which meant that Unruly Child’s brilliant debut was released at least a couple of years too late. Maybe in 1989, that album had sold shitloads of copies and maybe sported a few hit singles. So the album bombed and the band more or less split up even though they released a couple of records in the late 90’s and early 2000’s with first Kelly Hansen (now in Foreigner) and then Philip Bardowell instead of Marcie – then Mark – Free at the mike.