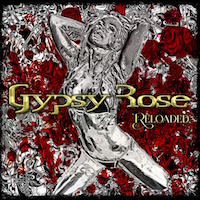 Back in the early 90’s there was a Canadian melodic Hard Rock band called Gypsy Rose. They released an album called Prey in 1990, picked up by a good friend of mine. Back then, the way we file-shared our stuff was to borrow a record from a friend and having it taped on an empty cassette, something I did with that album. I dug it so much I had to get my own copy but after that record, I didn’t hear squat from that band. Fast-forward to 2005 and all of a sudden, Gypsy Rose appeared out of nowhere with a self-titled album. The only problem was, it wasn’t that Gypsy Rose but a Swedish band who used the same name. When that info reached me, disappointment had me not checking the record out, but the name popped up here and there throughout the years. A second album, Another World, was released in 2008 and featured former Accept singer David Reece (also in Bonfire for five minutes).

Gypsy Rose were actually formed back in 1981 but in the 80’s, Gypsy Rose were shit out of luck and finally called it a day back in 1993 – which means it took them 25 years to reform and release their debut album. Behind that was Aussie Andrew McNiece, the guy behind the great web-site melodicrock.com. The original line-up of singer Håkan Gustafsson, guitarist Martin Kronlund, bassist Mats Bostedt, drummer Imre Daun and keyboard-player Rikard Quist lasted for that one album before Gustafsson jumped ship and was replaced by said Reece for the second album. As the last record came out 11 years ago, it’s unclear whether the band is active today, but Kronlund has now made sure to give the debut album a second chance by rereleasing a remastered version of the debut album – with an added bonus track – under the title Reloaded. And this time, I was gonna give them a fair shot. Better late than never, right?

Opener and leading single “When You Leave At Night” kicks the album off in a more edgy Melodic Rock way. Raunchy and rhythmic, this upbeat and in-your-face number strikes hard with a distinct and catchy refrain. If this song was written back in the 80’s, it’s really beyond me that this band didn’t land a deal because folk, it’s a killer that sticks right from go. “You Drive Me Crazy” is a Hard Rock track with a punchy groove and direct main-melody that brings us into a catchy refrain that holds a slightly AOR-fueled vibe. The big crunch of the song makes sure it never goes into cheese-territory one bit. Good one. “Promise To Stay” is a big, uptempo pop-rocker that holds a heavy and steady rhythm that takes the tune over the Hard Rock border. The refrain, however, is total AOR with some major catchiness and lots of hit-potential. A magnificent pop-pearl without a doubt.

The smooth and soothing ballad “Moonlight” holds a floating and levitating vibe. Even though it’s on the softer side with a mesmerizing yet catchy refrain there’s nothing cheesy or sugary with it at all. Quite the contrary, the tune comes across as quite powerful, both melancholic and a bit dark. Great! “You Are The One” is a hard-rocker, faster in pace and straight-forward but for some reason, I find the tune lukewarm and mainstream and me and the song just don’t hit it off. It’s ok but on the forgettable side. The upbeat rocker “Queen Of The Night” brings on both Def Leppard and Bon Jovi vibes and the massive refrain holds a major pop-nerve with hooks that goes right to the brain. In my world, this is a hit. “Burning” is a pop-rocker with a heavy edge and beefy groove with some funky guitars to bring up the swing. It’s in the middle of AOR and Melodic Rock but with a sharper Rock outlook. Very good.

Some fat, Hard Rock riffs showers over me when “Light Up My Way” shows up. Upbeat and kicking, the tune punches in with a grit and an in-your-face attitude. The Crashdïet-like – completely unintentional is my wild guess – refrain is full of hooks that mixes big catchiness with a more rowdy sound-scape. It may not be single-material but it’s still a good and memorable rocker. “December Night” brings on some Melodic Rock delight. With an 80’s groove, this mid-paced number comes on like a heavier Def Leppard going into an “Is This Love” Whitesnake direction. The majestic main-melody brings us into a brilliantly catchy refrain not a far cry from Chris Laney’s way of writing which brings the Laney’s Legion record to mind. This is spot-on!

That a song with a title like “Fender ’59” is guitar-driven isn’t exactly a surprise so of course it is. This is a crunchy and gritty hard-rocker that holds a steady and beefy rhythm. Memorable and catchy, the song is more of an album-track with a huge live-feel – Hard Rock with big melodies but crunchy enough to rock any crowd out there. “The Look In Your Eye” is a tougher take on Melodic Rock – very melodic with lots of hooks, memorable melodies and a catchy, pop-laden refrain but ballsy and quite heavy. A really good track that closes the original album. The newly written bonus track “Solitude” comes with a darker edge. It’s punchy and raunchy with a sleazier vibe. It’s a decent track but a bit too mainstream and it doesn’t really cut it all the way.

Why didn’t anyone shove this record in my face when it came out? Bad style. I blame you for not making sure this record ending up in my collection. Jokingly aside, this is an album right up my alley. It’s built on Melodic Rock and AOR but with a more Hard Rock approach where the guitars are at the frontline and the keyboards are just there to add some flavor to the music. It’s a powerful record full of catchy rockers with lots of hooks, great performances by all the members but guitarist Kronlund and singer Gustafsson really sticks out. The production is at times a bit slick but they at the same time managed to keep the rawness in and I guess Kronlund’s remastering has added another bite as well. If you, like me, missed out on this then it’s time to change that. This is too good an album to collect dust in some basement somewhere. Now, go ahead and give the second album the same treatment, please.