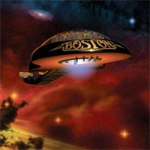 Boston was first with two things – they invented AOR and they were the first band to use an American city as their band name. At least to my knowledge. Ok, so when I write “they”, I mean “him” – because Boston is more or less a one man affair and his name is Tom Scholz. Every other so-called member has always been a hired hand. The history of Boston began back in 1976 when Scholz, after years of musical miseries, finally got himself a record contract with Epic after every other label had rejected him and his music. Fact is, Scholz was about to give up when he got signed in the eleventh hour – he was then in his late twenties and was ready to cut his hair and get a job. My guess is that Epic was pretty happy about that signing as Boston’s first single “More Than A Feeling” became a monster hit and the self titled debut has to date sold nothing less than 17 millions copies. Also, the album was more or less made by Scholz alone in his basement which made production costs for Epic close to nothing. Before the album was recorded, Scholz had hired the brilliant singer Brad Delp (1951 – 2007), a voice that didn’t exactly hurt record sales one bit. But as usual the record company wanted more music pretty quick which led to the fact that the follow-up Don’t Look Back (1978) didn’t even sell half of what the debut did. On the other hand, seven million isn’t exactly a bad number. That’s why Scholz didn’t exactly rush things when recording their third album – it was released in 1986, was called Third Stage and spawned another mega hit in “Amanda”, but after that things would never be the same in the Boston camp. When Walk On was released in 1994, Brad Delp was gone and had been replaced with Fran Cosmo and the album had a hit with “I Need Your Love”, but the album only shipped a million copies. Still not bad for an AOR act right in the middle of grunge reign. 2002’s Corporate America is Boston’s most debated album, as it was somewhat experimental. It contained both Delp and Cosmo on the vocal spot and didn’t sell many copies. From 2008 to 2011 Michael Sweet of Stryper was Boston’s singer on tour and Stryper actually recorded a cover of Boston’s “Peace Of Mind” from the debut for their Murder By Pride album.

Which leaves us to Boston’s (Scholz’s) brand new album Life, Love And Hope, released a good eleven years after it’s predecessor. And this time we get an album that is more a solo album than any other of Boston’s releases – this album contains no less than five different singers, including Scholz himself. The album opens with the very good and classic Boston sounding “Heaven On Earth” with lead vocals by one David Victor and guest Louis St August. “Didn’t Mean To Fall In Love”, a re-recorded version that first appeared on Corporate America, follows, but falls flat on its back. The song sounds like a failed attempt to write “More Than A Feeling” once again. Too bad as it contains one of the last recordings by the late Brad Delp who committed suicide in 2007. “Last Day Of School” has a pretty catchy melody, but the song is an instrumental and sounds unfinished, the title track, sung by new vocalist Tommy DeCarlo – a singer that sounds so much like Delp that it’s scary – is great, but in all fairness, that song sounds more like Asia than Boston and the Kimberly Dahme sung “If You Were In Love” is really bland and doesn’t go anywhere. Dahme became the first female member of Boston back in 1992 when she joined as a bass player. She also has a song, “With You”, on Corporate America. “You Gave Up On Love” is a great AOR tune with a classic Boston sound, sung by DeCarlo, Dahme and Scholz together. DeCarlo sings on “The Way You Look Tonight”, an ok song, but waaaaaay too much extra cheese on it. So, when it comes to songwriting and melodies, much is recognizable and even though there are some fillers here, the are some really good songs.

Enter: production! Here we have a guy that has a reputation for being a control freak and a perfectionist, a guy that has taken 8 years in between three of his albums and 11 years in between this and its predecessor. That’s six albums in 37 years. Must be some kind of record. Anyhow, that’s how Scholz is – and he gives us this piece of garbage. I might sound harsh here, but it doesn’t matter that there are potential in the songs, yes, despite the awful production here, you can hear that some of the songs are really good, but it doesn’t matter, because this album is almost unlistenable. The first Boston album, made by a poor Scholz without the technology of today, was more or less Scholz’s demos – and that album sounds superior to this. It’s actually from another dimension. This is a mystery. The production doesn’t have any structure and the whole album sounds unfinished, like Scholz finally had enough of the studio and went all “screw, this, let’s just release it…”. The truth is, this is not a good album at all and when a bunch of really good songs can’t hold an album afloat, then something’s wrong. Why a personality like Tom Scholz would want to release a product like this is beyond me. Avoid!