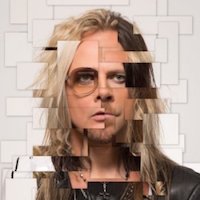 The ever flowing stream of cover albums never seems to end. But to be fair, this hated-by-many trend do come in different shapes and colors. The most boring ones are those that you can put in the we-want-to-show-our-fans-where-we-come-from-and-who-our-influences-are file. Those are the records that brings us new versions of the most famous Led Zeppelin, Black Sabbath, Kiss and Deep Purple songs – the predictable and unimaginative types of cover albums. Then there are the ones that are fun (yes, they do exist) where the artist steps out the their comfort zone and take some chances. Norwegian AOR queen Issa (Isabel Oversveen) made one called Can’t Stop in 2012 full of her own versions of pretty obscure, mid to late 80’s AOR songs by artists that never made it, at least many of them. I liked that one. And last year, Swedish AOR rockers Last Autumn’s Dream released a brilliant one full of AOR and melodic rock covers from both the 70’s and the 80’s, many very obscure ones – a brilliant record.

When Swedish melodic rock band The Poodles return with their first album for three years, they do it with a covers album – and they take it one step further. This is an album full of old pop songs that has nothing to do with hard rock what so ever – in hard rock versions, except for the closing Deep Purple ballad, that is. This album is also the debut album for new bass player Germain Leth who replaced Johan Flodqvist (who was in the band shortly) who replaced Pontus Egberg who left to join King Diamond and Treat. One part of me thinks it’s a shame that all we get after a three-year break is only a bunch of covers – especially as the last few albums has turned out so damn good – but another part of me thinks that this concept of turning pop songs into rockers are a brilliant idea and that part of me couldn’t wait to get my hands on the album.

So they kick off the album with a Osmonds tune. The Osmonds!!! Very unpredictable. I have heard said song before but I can’t say that I’m very familiar with “Crazy Horses” much. But it takes only one listen to hear that they have turned the tune into a bona fide Poodles track. It’s upbeat, pretty heavy and it do rocks with a really raunchy groove. The catchiness is intense and I’m sure it will be featured in their live set. It’s a great cover with only the synth horns instead of real ones as a minus. I think that a tune like “Maniac” from the Flashdance soundtrack couldn’t have passed anyone by. I think the original is ok but The Poodles makes a damn good melodic rocker out of it and I do prefer this to the original. There is a disco-like drum beat here as well which is a bit overmuch, I reckon, but as a whole, they nailed it.

“Love Is Gone” is a cover of a David Guetta song. If I’m not misinformed, Guetta is a hip DJ of some sort which explains why I have never heard the song before. Poodles’ version is in mid pace but heavied up and sounds very Poodles-like, very catchy and very good. I doubt that I will find the original even remotely as good, though. Depeche Mode is a band that have been covered by hard rock and metal acts before, even though they’re a full-on synthesizer band – or at least they were. I can’t say that I’m a fan of either them or this tune but again, Poodles version is really good. In fact, it’s brilliant. It comes in a mid tempo, it’s heavy and it’s dark and it’s dynamic with a fat groove. It’s a rocked up Poodles style track but it’s still very easy to immediately hear which song it is. A great cover and a no-brainer as the first single. Should be a hit.

Next up, a cover of a Swedish House Mafia tune called “Don’t Worry Child”. Yuk! I hate the Swedish House Mafia. In the hands of The Poodles, the tune has been gifted with a good AOR vibe albeit in a darker mood and goes into power ballad territory. It’s ok but I can’t say the song floored by any means. Elton John’s “Goodbye Yellow Road” is a massive hit and it’s a brave move to cover it. But they stay too true to the original and not much new is offered the song so the the point is missed here. Not bad but a bit dull cover of a great tune. Blondie’s “Call Me” is another monster hit and another brave move by the band. It’s been rocked up good enough but the verses could be a bit rougher. But the refrain is kicking, in-your-face, amazingly catchy and very hit-friendly. I think the original is ok, but this version is really spot-on. Next single?

Fleetwood Mac’s “Go Your Own Way”, a damn good song originally, is up next. The Poodles have rocked it up some and it goes a bit metal towards the end but for the most, the tune is too much pop and I don’t think they have made enough of it as it’s too close to the original which makes it a bit daft. I can’t say that I have heard shit-lots of Adele but the stuff I have heard – like this song “Set Fire To The Rain” – hasn’t really been to my liking. Fact is, I have always found her a bit pretentious. But I must say that they brought this one home. This version is an AOR-laden melodic rock power ballad that sounds like The Poodles all the way. A killer cover and maybe a future single. The closing track is Deep Purple’s old ballad “Soldier Of Fortune”, then sung by David Coverdale. Here it’s still a taciturn ballad but The Poodles has given it a somewhat Celtic arrangement to make it differ from the original. And I must say that Jakob Samuel sings it really, really well. A perfect closer.

I really dig the idea of making a covers album the way The Poodles have done here, very cool and different. And for the most they have succeed in making those pop songs their own and they have at many times turned songs I find pretty mainstream and bland into really good melodic hard rock tracks but at a few times too many, the song in question has stayed too true to the original and even though no versions here are plain bad, those do fall flat by the way-side. Also, I think that the production could have been a bit rougher and heavier in general but that’s a minor thing here. As a whole, The Poodles pulled this project off and the album really comes across as a “real” Poodles record more than a covers one. Besides, I have a feeling that many of these songs will work brilliantly live, where they probably will turn out heavier yet. For you who long for another Poodles album of originals, this one will do just fine as an appetizer.