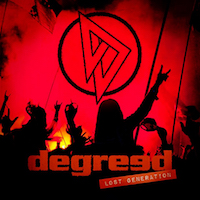 It was only five years ago that I discovered Swedish Melodic Rock act Degreed. I had known of them for years as they already had two albums out by then – Life, Love, Loss (2010) and We Don’t Belong (2013) – but I hadn’t got around to check them out. Their then brand new album Dead But Not Forgotten and its single, the amazing “Better Safe Than Sorry”, changed all that. The album completely floored me and so did the eponymous follow-up – and that was when I decided I had to check their previous albums out. Good albums, both of them but none of them in the class of the two follow-ups, I must say. As a somewhat new fan of the band, it’s of course of big interest when they release a new record. The three years that has gone by since the last release feels much shorter and my love-affair with the last two albums lingers still and since the word on the street was that Degreed had updated their sound somewhat with the new album, both anticipation and big expectations are following its release – and I must admit, a small chunk fear of them going too far south as well.

The opening intro, called “Intro”, is a couple of dudes riding a car, chatting away and the whole thing reminds me not so little of the intro to Kiss’ “Detroit Rock City” – which takes us into the title track. Why make this intro an individual song instead of a part of the title track is a bit puzzling, though.  Anyway, the title track is a rough and bumby track, clearly influenced by Heavy Metal although the “whoa whoa whoa” in the refrain takes us right back to the Melodic Rock side of the mid 80’s. The mixture of the two works like a charm here and with Degreed’s personal style and lots of hooks – especially in the chorus – makes the tune a winner. A good start, indeed.

The anti-drug song “You All Know My Name” starts with the sound of someone hacking up and snorting some cocaine before this dark yet upbeat tune kicks off. It’s a heavy, riff-happy and ballsy rocker, quite aggressive where Metal meets Melodic Rock over a kicking rhythm. Still pretty hard, the chorus is very pop-laden and extremely catchy, more in the vein of what we’re used to from this lot. A killer song indeed. Leading single “Ruins” come is a mid-pace, is a bit laid-back and dark but still with a groove. The melody-arrangement is of the melancholic kind and the refrain is very memorable. Fact is, the tune even leans over to the ballad side of things and if I was to decide, this song would be all over radio as we speak. Then we get “Interlude”, which is an interlude, a smooth and short instrumental that could – and should – have been a part of the next song, which is…

…”Summer Of Love”, a straight-forward pop-rocker that holds some smooth, soft and a bit laid-back verses and an AOR-laden, catchy as Hell refrain with an enormous amount of summer-feel. When listening I can feel the warmth of the hot sun and if I close my eyes I see palm trees while sitting in my car with the top rolled down and what’s not to love about that? This should be a single as it smells like a hit for miles. The ballad “Blue Virgin Isles” is a cover of a Swedish singer-songwriter Ted Gärdestad (RIP) – who ruled the air-waves back in the 70’s – song, “Himlen Är Oskyldigt Blå” translated into English. It’s stripped, laid-back, smooth and very emotional. Half of the song is based on only piano, synth strings and vocals but after the solo it gets pompier and louder and it then transforms into a bonafide AOR ballad. A damn great cover and more hit-potential our way.

On a sleazier and dirtier note, “Sex” comes on crunchy and stompy with a pop-intro, a happy-go-lucky party feel and the chorus is massively catchy. It might be slightly clichéd but damn this is irresistible. Gotta love it. “Body Of Work”, on the and the other hand, takes a totally different turn and brings on a whole lot of styles to the point of multiple personalities. It’s heavy and hard with metal-riffing over a metal-rhythm but the vocal arrangement is more Melodic Rock. The blipping synth in the background draws influences from modern Metal / Hard Rock and the organ solo breathes 70’s, classic Hard Rock in the vein of Deep Purple or Uriah Heep. The verses are somewhat smoother, the pre-chorus get more edgy and straight-forward while the intense and striking refrain hits right where it should with splendid catchiness without going cheese or syrup on us one bit. A brilliant track with loads of hit-potential. Must be a single at some point.

“Born Under A Bad Sign” is laid-back, somewhat sullen and soothing with a levitating melody. It’s a slow ballad, quite smooth but with a chorus that etches itself to the brain after the first spin – but not a typical power-ballad at all. It kind of reminds me of a mixture of the last H.E.A.T. record and Degreed’s last record. Very, very good. Starting out as a ballad in a slower pace, “Don’t Let Go” is darker laden and groundy at first but after the first verse the song takes a more upbeat in mid-pace and rhythmic route and once again they treat us with a classy and big AOR refrain that’s impossible to not surrender to. Very good. Closing semi-ballad “Alive” comes in a mid-pace with verses which are smooth and laid-back with a dark and saddening melody arrangement but also with a refrain that’s huge – and extremely catchy. To bring out a contrast, the solo part is heavier and bouncier albeit still in a slow pace. Way to go!

As a whole, this record might not be as direct as the previous two but when it sticks it sure damn sticks. I also love the fact that Degreed doesn’t lock themselves into the box that is the norm of many AOR and Melodic Rock bands – they dare to get out of their comfort zone and try other things – in this case bringing in Metal, Hard Rock, modern sounds and Classic Rock which makes for an interesting musical experience for the listener – if the listener is open-minded enough. The guys also know how to write damn good, classy Rock songs and they sport a sound and identity that is their own. That said, the tempo could have been a bit higher – there are lots of slow stuff here. It’s on the minus account but it doesn’t make the album less good. Also, I can’t get over the auto-tune that shows up every now and then – I have never seen the band live but my guess is that they can sing without it. Other than that, no complaints and I can state that Degreed has for the third time in a row brought us yet another portion of damn good music.

Dead But Not Forgotten
Degreed