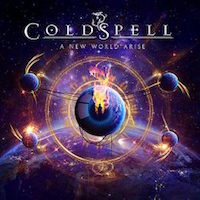 Coldspell are one of those bands that I have talked about in other reviews, you know the bands that you know of but never bothered to check out. Back in 2013, when they released their then new record Frozen Paradise I decided it was time to do so. And for one reason only. They had recruited a new bass player, Chris Goldsmith, who I am acquainted with and I just thought I’d check in and see how his new band sounded. And like so many other times, after only one spin, I wondered why I hadn’t done so earlier. Frozen Paradise happened to be a damn good album, full of melodic hard rock with influences from both hard rock, heavy metal and even a small chunk of power metal here and there and also some AOR-ish undertones. So when the band now, four years later, releases a new record, a check out by me is clear as a bell. Fact is, I have really been looking forward to sink my teeth into this one a lot. But I also have to admit, that I still haven’t gotten my thumb out of my arse and checked out their two first records Infinite Stargaze (2009) and Out From The Cold (2011). That’s gonna change as I’m writing this.

The guys kick things off in style with second single “Forevermore”, a fast heavy metal laden hard rocker. It has one of those distinct, jaw punching choruses that’s catchy but also telling us that there’s no liquid butter around to soften it up. The album couldn’t have started out in a better way. Then first single “Call Of The Wild” comes up. Yes, its title might have been used to death but don’t let that deter you. This is a melodic rock tune but it leans towards classic hard rock. The verses sports a bluesy, swamp twang guitar which makes the song stand out from ordinary melodic hard rock. Combined with a ballsy rhythm and a refrain that will keep you humming for ages makes this song a winner. On “It Hurts”, Coldspell provides us with some pop-metal – the way it’s supposed to sound. Based on regular classic hard rock, the melodies sweeps you away and the chorus is so catchy it’s ridiculous. But lest not forget, the tune is also heavy, guitar driven but with keyboards that smooth things up. Brilliant!

“Miles Away” is more of a standard hard rock tune with a metal influence, pretty distinct and rough, but unfortunately, the verses here are better than the refrain. It’s an ok song but it’s just good rather than great. With “Signs” the band drops the tempo a couple of notches. It’s a pretty heavy number where the acoustic guitar comes up for air but it also holds a vocal melody that really etches itself to the brain relentlessly. And speaking of vocals, singer Niclas Svedentorp really shines here, singing his heart out. Brilliant! “Love Me Like You Do” is a bit of a mold breaker here as the it comes on with a groovy blues-rock sway – Michael Larsson’s blues licks in the verses are glistening. When the chorus takes on a more regular melodic rock vibe, the R&B (as in old rhythm n’ blues, youngsters) makes for some cool variation and contrast. Thunder and Whitesnake are bands that comes to mind here.

“This Is Me” is more of a standard hard rocker. It’s not a bad song per se but it totally disappears around the high quality that we’ve been given on this record so far. It is forgettable and a filler. “Get To The Top” is more of a melodic hard rock track, very catchy and a refrain that’s quite radio-friendly, but at the same time, it’s pretty heavy. However, the chorus doesn’t keep what the verses promise here. Again, not bad but the chorus holds me waiting for the punchline. But “Wait Until Tomorrow” brings the quality back on track again. This straight forward melodic hardrocker comes with both heaviness and a sticky AOR laden refrain that makes me yell along right off the bat. “Losing My Mind” contrasts yet again with being a riff-happy, heavy hard rock tune with a darker mood that runs into heavy metal mode. The song isn’t exceptional, but still a very good tune and I’m guessing we have a grower on our hands here.

With “Just Another Night” they go into a more pure melodic rock / AOR direction that circuits around the typical Swedish / Scandinavian sound. But still they have managed to keep their identity intact, it sounds like Coldspell all the way. The refrain is very memorable and the groove is propulsive – a fantastic tune. They close the album with what I think is the absolute highlight of the album – the title track. It’s a slower paced, heavy, dark, fateful and atmospheric and we also get a stunning melody, a gorgeous arrangement and an amazing chorus that is ultra-catchy without being radio-friendly one bit. The dark ambience marries brilliantly with fantastic melodies and quite frankly, the tune leaves me hamstrung. Captivating.

Once again, Coldspell has given us a damn good record. I still hold Frozen Paradise as their finest moment and the reason for that is that the lowest level on this album isn’t as high but when this album is good, it’s bloody great – and it is great for the most part. I also have a feeling that the album will grow on me further down the road. It holds a very big production and the mixing is completely flawless where all the instruments coexists on a very satisfying and enjoyable level. But sure, one could probably argue that Coldspell might not bring anything new to the table musically, but the fact is, the band have their own identity and after having two of their albums in my life I can state that they do have their own sound. No matter what, the guys are damn good at what they do – excellent musicians with an ability to write good songs with lots of hooks. This is a band that should be bigger than they are now.