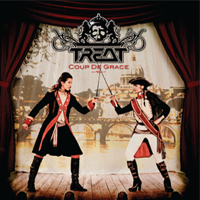 Back in the mid 80’s, when Treat were formed they quickly became Sweden’s second biggest rock act, right behind Europe. It was in 1985 when Treat – then consisting of guitarist, keyboard player and musical director Anders Wikström, singer Robert Ernlund, guitarist Leif Liliegren, bass player Ken Siewertsson and drummer Mats “Dalton” Dahlberg – released their debut album Scratch And Bite, right in the shadow of Europe’s world-wide signing. Fact is, it was Treat’s “Too Wild” that was responsible for Joey Tempest writing “Rock The Night” as he felt that Treat might be taking over if Europe didn’t also have an anthem like that. Treat quickly became one of Sweden’s biggest draws when it came to giging and even though their 1986 follow-up The Pleasure Principle didn’t have any hits such as the debut’s “Too Wild”, “We Are One” or their biggest ever hit “Get You On The Run”, people still bought the album and went to their concerts. They had by then changed drummer with Dahlberg leaving to start his own band Dalton and Leif Sundin replacing him. By 1987 and Dreamhunter, it was time for Treat to get a world-wide – well, at least a full-blown European – release. Europe were already a huge act around the world by then and it would be damned if Treat wouldn’t be able to cash in on that. By then things have turned a bit Spinal Tap for the guys and Sundin was out and replaced to the much more charismatic and better drummer Jamie Borger (ex- Six Feet Under). Things were going really well by then except that they never got the big break abroad that they deserved. But damn the quitters, they thought and used all their muscle power for 1989’s Orginazied Crime, their finest hour to date. But there was more line-up changes, Liliegren and Siewertsson were out and new bassist Joe Larson and keyboard player Patrick Appelgren were in, leaving Wikström the band’s sole guitar player for the first time. Despite an amazing album, a great line-up, the album failed to make any impact and singer Ernlund decide to jump the ship. To many people, Ernlund was the weak link in an otherwise great line-up and with the addition of ex- Swedish Erotica frontman Mats Levén many thought that this would be exactly what the band needed – one of Sweden’s best voices. But when the band’s self-titled album came out in 1992, the melodic rock era was drawing its last breath, grunge had started to take over and it didn’t matter that the album was brilliant, Treat’s days were counted. Besides, many thought that even though Ernlund certainly was no Pavarotti, the band lost some of its identity with him. Fast forward to 2005 and the 20 year anniversary of the band. That meant a short reunion to celebrate that with a compilation album – Weapons Of Choice – with two new songs in 2006 and some gigs to follow, now with Ernlund back and Nalley Påhlsson (Chris Laney, Randy Piper’s Animal, Zan Clan) in on bass. The album sold surprisingly well and the all the gigs were so well attended that the band decided that at least one new record was in order. Said and done, it was back to the drawing table for Wikström, this time without his long-time co-writer Ernlund and Borger, but with his ex-singer Mats Levén and his long-time song writing partner Fredrik Thomander in tow (the Wikström / Thomander team have written songs for bands like Gotthard, Backyard Babies and Scorpions together.)

For yours truly who have always been a big fan of this band, the news that a new record was on its way was fantastic news. I always thought that this band was always criminally underrated both as musicians and as song writers and I always kept my fingers crossed that they guys would get their shit together and reunite – there was never any doubt in my mind that they would, at least, have one more killer album in them and in the year of 2010 we finally got that record. Of course, when old heroes decides to give things a go again it’s a bit nerve wrecking whether they would come crashing down or release a collection of well written and great sounding melodic hard rock, even if I knew in my heart that these guys would never release anything half-arsed.  The opening intro title track is, as they very often are, a bagatelle in its own right and should just be part of the following song, in this case the hard driving melodic hard rocker ”The War Is Over”, a brilliant opener and it will probably be their new show opener as well. Things could hardly start better. “All In” is another rough rocker with a distinct melody and a smashing chorus. ”Paper Tiger” and ”Roar” are two amazing melodic hard rockers, both with verses and choruses so catchy it’s impossible to even beat them out of your skull and they both have HIT written all over them. There’s a dip with the ballad “A Life To Die For”, a ballad just a bit too cheesy for comfort. Butter is pouring out of my speakers after listening to it. But “Tangled Up” picks things up again, it’s Treat on their heavier side and to me this is a future live killer. ”Skies Of Mongolia”, originally written for Scorpions, is probably best of all. Melodic and catchy, but still heavy and rocking enough  – a total hit. What The Scorps were thinking turning this one down beats the Hell out me. ”Heaven Can Wait” too has the killer hooks and the intoxicating melodies that is needed for airplay. On the heavier, more hard rocking side, ”I’m Not Running”, is a really strong number that should work really well live, fists in the air, kind of stuff. “No Way Without You” is another favorite here, a melodic hard rocker with a melody stickier than glue. “We Own The Night” is a power ballad that will probably be a future single, but it just doesn’t work with me. It’s not bad by any means, but a bit too middle-of-the-road, I’m afraid. Same with “All For Love”, a ballad that doesn’t sport the high quality of the most of this record. ”Breathless” closes the CD gracefully with power and intensity. A burning power rocker with a jawbreaking melody. After that, I just want to listen to the record all over again. And again. And Again.

Here’s the deal, with Coup De Grace, Treat might just have released their finest album of their career. There is very little to complain about here – in fact, only the ballads are this record’s weak link, but on the other hand, ballads were never Treat’s strongest side. Think about it – “We Are One”, “Take My Hand”, “Stay Away”… Not exactly greatness, huh? More of the stuff your grandma and grandpa would like to slow dance to. The biggest surprise, however, is lead singer Robert Ernlund. The guy never sucked, but he never had a strong voice either and his English were never that great, but at the age of 50+ he sings better than ever. Impressive development. The rest of the band is no surprise though. Anders Wikström has always been an underrated guitarist – one of the best players that this country has given the world and on here his playing is melodic, soulful, but never lacks aggression and attack and they rhythm section that are Jamie Borger (drums) and Nalley Påhlsson (bass) are surely the best this country has to offer. Even though Treat might be in Europe’s shadow forever for many rockers (who said the world was a fair place to live in?), they have with this album released a magnificent album that beats the shit out of most bands and it shows that Treat has a lot to offer the world of music. Had it not for a couple of too cheesy ballads, this CD would have gotten the full monty and I can’t wait for the next one. Because surely, this really can’t be their last, can it?