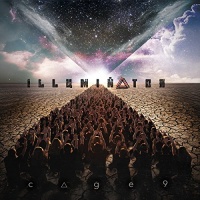 I don’t know if it’s just me, but sometimes when I look at the name of some band, I just know what kind of genre they belong to without hearing a second of the music. That means that if I have it in my head that the band in question belongs to, say, power metal – or nu-metal or modern American radio metal, I just lose interest and doesn’t even feel like reviewing it at all. That’s stupid, of course, because half of the times, I’m wrong and sometimes when I’m right, I end up liking the album anyway. Cage9 are such a band. When I got the download link and saw their name, I just knew that they were one of the millions of bands that plays modern metal / hard rock, the stuff that’s being played on the radio everyday, that goes in one ear and out the other. But being the music nerd I am and the fact that this guy had bothered to send me the link, the least I can do is to check it out and make an effort to write something about it. Cage9 are based in Los Angeles but were formed in Panama City and they have been around for some 10 plus years (the online info is somewhat confused, though. It says that the band was formed in 1999, but also that their debut album was released in 1995 – an equation that doesn’t really work…) and have throughout the years released no less than nine albums prior to this one. The band – Evan Rodaniche – vocals and guitar, Matt Borowski – guitar, Leslie Wyatt – bass and Brian Sumwalt – drums – has been working the underground circuit and most of their previous records are independent releases, which explains why I have never heard of the band before. However, the new album is the band’s debut international release on David Ellefson’s (Megadeth) imprint EMP/eOne. The album was released on June 3rd in the States but sees August 12 as the release for the rest of the world. So with no expectations what so ever, I lend my ears to Cage9 for the first time ever.

They open up the album with a real jawbreaker called “Open The Sky”. The riffs are heavy and hits like a ton of bricks and the groove is irresistible. The melody catches on with shitloads of hooks and sometimes they makes me think of a more melodic Korn. The modern metal vibes are there but not very obvious. Thumbs up right away. With “Gallows” they aim for airplay but it doesn’t sound fake or like a sell out, just catchy as hell and the hit potential is all over the song. The sound of modern rock is there but even more so is the sound of classic hard rock. It’s definitely a winner. “Starry Eyes” is hard, heavy and aggressive and again, I can I hear a small Korn influence, but there is also a twist of Disturbed in there. The rhythm comes with an almost gothic feel, a bit like the kind of rhythm Lacuna Coil uses a lot. The tune comes off as a bit noisy, but there are also some distinct melodies that really sticks – a really good song. “Everything You Love Will Someday Die” – a very personal song to Rodaniche who dedicates it to his dad who passed away from cancer recently – starts out with a very poppy melody and the twin guitars sounds Thin Lizzy influenced, but soon some thrash metal riffing comes along but big pop is still very much all over the track. It’s a heavy song but at the same time very melodic and the chorus is insanely catchy. This is a hit, no doubt about that and it’s my favorite song on the album – brilliant! The ballad “Oscuro” is dark and gloomy but at the same time it’s both very catchy and even uplifting and it sticks right away. I can see this one as a hit as well. “Black Horse” is a slow and dark rocker on the more progressive side, fans of Swedish prog metal band Khoma will probably have a field day with this one.

“Death Of A Dragon” might have a somewhat cheesy title but the tune is a killer. It is dark, melancholic, slow and heavy with a riff and sound that is not a far cry from later day’s Slipknot’s more ballad-like stuff. Even though  “Aleatoricism” is an uptempo, groovy and swinging hard rocker with a poppy arrangement that just won’t stick. It’s an ok song but it could have been more memorable. “Birds Of Prey” is also on the progressive side of metal and it comes with an intense rhythm and an aggressive sound but also with a very memorable and catchy chorus – another winner! Another favorite is “Martyr”, a heavy grooved hard rocker where everything – melodies, riffs, the rhythm, the beats – is catchiness de luxe. My guess is that a song like this will be a future live killer as well – super awesome! “Ghost” is a ballad, but it’s kind of out there – slow, dark and intense with an electronic vibe that’s almost industrial. It takes a couple of spins to get into but when you do, it will never leave your head. The title track comes with a big, groovy rhythm that is Korn meets Slipknot on an AOR-ish and even pop melody that glues itself to the brain. The mix really shouldn’t work but the contrast is really cool. They close the album with “Take Back Tomorrow”, an anthemic and sing-along-ish catchy hard rocker groover that sounds like Papa Roach of today meets Filter at a Sixx A.M. gig – what a brilliant way to finish the record.

This album is a text-book example of how you can benefit from just giving stuff you have never heard of before a break. Musically, I’m not sure how to label this band. Of course, it’s hard rock but in hard rock and metal there are lots of sub-genres and this band put lots of them in the mix. The base is metal but there are influences from classic hard rock, pop, modern radio rock, neo-grunge and – in very small doses – industrial and AOR. But no matter what you wanna call this, everything grooves, swings and it’s very memorable without being cheesy. Also, all the influences I hear in the songs do not make this band a copy-cat by any means, in the end all of those makes the band sound like Cage9 and no on else. The performances are also very authentic and emotional – when Evan Rodaniche sings it sounds like he means every single word. The production is pretty slick and easy listening but at the same time it’s heavy, fat and raw. Maybe after all these years Cage9 will get their big break, this album have all the ingredients to make that happen. Do yourself a favor and check it out – you don’t wanna miss out on this one!