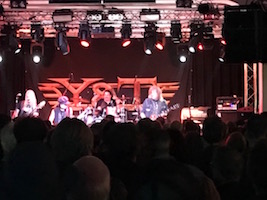 I once got a bit of bashing for calling a Y&T gig safe. What I meant by “safe” is that you don’t have to think twice about whether they will make a killer gig or not. Because they always do. This was the 10th time I have seen them live and they’ve always been amazing. Every time. What’s not safe is their setlist. Sure, they do have their must-play-songs, just like every band that has been around for a long time but they never play it safe by only going out and playing the hits and the classics, they always change the set around, playing lesser known and sometimes even obscure stuff. And those songs always go down like a charm. Somebody should tell Paul Stanley about this. Which in turn means that as fan to say that “I’ll skip this gig because I’ve already seen them so many times” is a mistake. If you do you’ll miss out because with Y&T, no tour is like the other, song-wise.

This year marks the band’s 45th anniversary and how do you celebrate that better than to hit the road for yet another tour? The only sad thing about it is that lead guitarist/lead vocalist Dave Meniketti is the only original member alive for the celebrating. Bass player and Dave’s closest friend Phil Kennemore succumbed to cancer in 2011, drummer Leonard Haze went in 2016 and in 2017 guitarist Joey Alves passed away. But luckily for Dave, he has found astonishing replacements for the guys. John Nymann (guitar) joined in 2003, drummer Mike Vanderhule joined in 2006 and new bass player Aaron Leigh replaced Kennemore’s replacement Brad Lang in 2016. 3/4 of Y&T has been in the band for so long you hardly ever think about them being replacements anymore so Y&T of 2019 are as a tight unit musically as it gets. And as a major fan, I’m so happy they’re still around.

Just like on the previous tour, the intro “From The Moon” opens the show and leads us right into the rowdy gut-puncher “Hurricane”. It’s an intense and uptempo rocker, perfect as the opening track. To put a mellower, mid-paced tune like “Lonely Side Of Town” as early in the set as the second song is a bold move, risking the roaring and rowdy atmosphere from the opening track to get lost – but it doesn’t. It’s a brilliant song with a chunky groove and a beefy rhythm with a distinct refrain – and everybody knows the tune inside out. Why “Don’t Stop Runnin'” didn’t become a mega-hit back in 1984 is a mystery if there ever was one, but this crispy and upbeat hard rocker works brilliantly live and the big-ass chorus is impossible not to scream along to. The opening riff to “Black Tiger” raises a cheer and when the song starts pumping everyone’s ready to rock. You can’t go wrong with a killer tune like that. 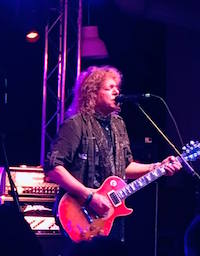 The heavy and crunchy ballad “Come In From The Rain” from 1990’s Ten isn’t a song we’ve been spoiled with live. It’s really a forgotten pearl and great to hear live – I don’t think I have ever heard it live before – and it goes down really well. “Mean Streak” might just be Y&T’s most popular song, at least top 3, and it goes without saying that the tune kicked up some dust this evening. Before “Midnight In Tokyo”, Meniketti told us to sing along to the guitar-melody, something they do on Japan but nowhere else and we were all happy to oblige him. The song might be a slow-paced, half-ballad but everyone loves it so it really don’t lower the action at all. The highest notes is really hard to sing but Dave pointed out that he heard a few reaching them. I applaud that – I certainly wasn’t one of them…

I have always thought that Down For The Count (1985) is a really underrated album. Many of Y&T’s fans reckon it’s too polished and AOR-laden and therefore don’t rank it especially high. I understand the reasoning but song-wise it’s a great record and I have always hoped that Y&T would air some of the songs from that album as I think those songs would sound really great without a polished production and keyboards. Therefore I was happy as a kid on Christmas when Dave introduced “Face Like An Angel”. In the beginning of the song Dave got, what he called a “brain-fart” when he forgot the lyrics to the first verse and they had to stop the song and let Dave remember the words and then start again. I was right about the sound, though as the song was bettered by a rawer and raunchier outlook. It’s a brilliant song with a chorus made in heaven. Thanks guys for that one.

And if that wasn’t enough, Dave said that guitarist John Nymann had been pushing for his favorite Y&T song to be played, so they gave us “Anytime At All” – another Down For The Count song. I adore that tune and just like “Face Like An Angel”, it took on a new life without they slick production and over-use of keyboards. When I looked through Y&T’s setlist for this tour, it looked like Stockholm was the only place that got to hear “Anytime At All”, as it hasn’t been played neither before or after that gig. Thanks, John! After that one it was time to go back in time to when Y&T was still called Yesterday & Today and their self-titled debut album. The song “Earthshaker” gave its name to their third album – and their first under the Y&T moniker – and I can admit that I haven’t listened that much to the two first records. I think they’re ok but not up to par with the albums from Earthshaker (1980) and forward. “Earthshaker”, however, is gritty and raw rocker that worked vary well live. 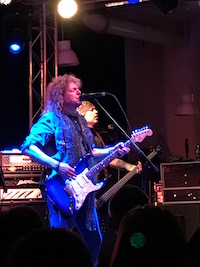 “Struck Down”, the title-track from the second Yesterday & Today record was up next and even though it’s not particularly straight-forward, it do hold a great groove that’s made for the stage. I love that song so I was happy to hear it this evening. “I Want Your Money” from Y&T’s latest studio-effort Facemelter – and the only Y&T album featuring Nymann and Vanderhule – gets a really good reaction from the crowd and it was clear that many of the punters knows that record. It’s a classic Y&T stomper and it fits right into their set. The big ballad “I Believe In You” always brings out shivers down my spine, few songs are as emotional as that one and everyone loves it – there was some very loud singing along from the crowd during the refrain. Goosebumps. “Hang ’em High” is a real jawbreaker, punchy and rough with a splendid live-feel on the album so that the tune went down like a storm isn’t surprising at all.

Since it’s Y&T’s 45th anniversary, Dave explained that they would play at least one song from every album and now it was time for Musically Incorrect (1995) to come up for air. I like that album but it also shows quite clearly how the winds had changed by the mid 90’s. It’s probably my least favorite Y&T record as it doesn’t sound as vital and loose as the rest of their records – the somewhat darker mood doesn’t really fit them. This is why I think “21st Century” was the only song that didn’t reach their usual high level. It also felt like a big part of the crowd had never heard this song before – the reaction was somewhat lukewarm. Which can’t be said of “Contagious”. The song has turned into a bonafide Y&T classic by now and Meniketti had no problem getting us to chant the “Hey”‘s of the song. Contagious (1987) also suffers from a slick and thin production so this tune really comes alive on the stage where it gets a rawer treatment.

“Summertime Girls” is without a doubt Y&T’s poppiest tune – way too poppy some fans argues – but it’s a happy-go-lucky, fun-loving and positive pop-rocker and again, without the polish and 80’s sounding keyboards, the tune gets a rockier facelift which makes it a highlight of their gigs. Do I even have to mention how well “Rescue Me” went down? Y&T’s most popular song? It must be. The crowd stepped up yet another level of getting crazy when this tune came for a visit. Brilliant. The (first) set closed with another modern Y&T classic. “I’m Coming Home” might be the cousin of “Forever” and it screams Y&T a long way. It’s from Facemelter and it’s so awesome that the fans seem to have picked up on that record even though it’s a “new” one. What a killer.

As the first encore, their 1997 underrated album Endangered Species was presented. I was pretty certain that another song in the “Forever” family, “Still Fallin'”, would be the one representing that album but instead we got the enormously emotional ballad “Sail On By”. I could tell that many wasn’t that familiar with this one either but for some reason it drew some loud cheers. That felt real good as it’s a phenomenal ballad right up there with “Winds Of Change”, “This Time” or “Hands Of Time” and should have had a better fate. I hope that at least of some of the attendants will pick that album up after this. Y&T bid their farewell with “Forever”, of course. Speaking of popular songs, this one’s top three as well. When this fast-paced, uptempo bouncer kicked off, the place went nuts – like it always does. No Y&T gig is complete without it and it’s a perfect closer for a perfect gig.

This was the 10th time I have seen the band live and they never stop impressing me. First of all, the sheer passion and musical engagement the guys bring to the table after all these years is astonishing to see/hear. Also, bear in mind that Y&T, for some inexplicable reason, never broke huge (a proof that there’s no justice in the world) which means they’re still out there playing smaller venues and clubs. Many bands has called it quits for that reason alone. Their musicianship then. Leigh and Vanderhule has built a rhythm-section so tight it’s adamant and Nymann is an exceptional rhythm-player beaten by few. Fact is, I can’t think of anyone better right off the bat. And then there’s Dave Meniketti. As a guitarist he’s soulful, exact, emotional but also aggressive, rowdy with a glistening technique – one of my fave lead-guitarists ever. And as a singer – man, that dude can sing. 66 years young with pipes of steel and an amazing range. Speaking of vocals, the background vocals – no backing tracks here – are nothing short of fabulous. Why anyone would want to miss a Y&T is beyond me so the next time they play your town, cancel whatever you have planned and go see them!