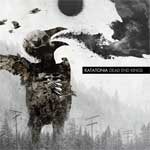 Sweden’s Katatonia started their career way back in 1991 as band in the doom / death metal genre by lead singer, guitarist, drummer Jonas Renkse (then known as Lord Seth) and lead guitarist Anders Nyström (then known as Blakkheim).  They more or less created quite a stir with their debut album Dance Of DecemberSoulsand have since gotten bigger and bigger as they have been moving forward musically with every release.  1998 was a crucial year for the band as it was the year they released their album Discouraged Ones which was the first Katatonia album to only feature clean vocals. They had prior to that had been using help from Mikael Åkerfeld (with whom Renkse also has a side project called Bloodbath with) from Opeth with some growl-vocals. It was also the last album that featured Renkse as a drummer. But it wasn’t until 2009 and their fantastic album Night Is The New Day that they got their big break. That album didn’t only provide them with huge critical acclaim, but it is also their biggest selling album to date.

Which leads us to this year’s release Dead End Kings. For a guy like me, who discovered the band not that long ago with their last album, the sound of that album is how I see the band. The heavy, melancholic melodies and the dark, almost saddening sound is the personality of the band and that makes them stick out, and of course, Renkse’s melody lines. This is what I was hoping to get on their new album as well, without repeating themselves and I’m happy to say that they have given us just that, taking their sound one step forward.  But Katatonia’s music is moody and it is not for everyone. This is not music to put on in the background while you’re doing the dishes because that way it won’t stick. This must be listened to properly and you probably won’t get it right away. This is music that will grow on you. This is music for you, your headphones, a dark room with lit candles, and if you hear just one little thing you like on here, keep listening to it until it sticks, because when it does, you’ll be stuck with it. And you will be happy for it.

“The Parting” opens up the album brilliantly. It’s heavy, melodic, progressive and dark. “The One You Are Looking For Is not Here” is a stunning piece of music. A bit on the softer side and with some beautiful female vocals by The Gathering’s Silje Wergeland. “The Racing Heart” is a dark ballad with a breathtaking melody, “Buildings” is heavy with alarming and brutal guitars and “Leathean” actually rocks with both heaviness and catchiness.  Just great.

This is a brilliant record and the way I see it, this is a natural follow up to Night Is the New Day. Both the production and the arrangements are amazing and the sometimes mellow and progressive melodies are striking.  It’s not an album, as you might have guessed, that you put on for party moods, it’ll probably work better the day after! But don’t give up on it if it doesn’t hit a home run right on the spot, it will take time to get into it, but mark my words, the musical journey this band will take you on when it does, will be worth the effort.