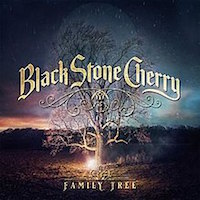 Two years ago Black Stone Cherry completely floored me with their then new album Kentucky. They kicked me right into next week. Rocked my socks off. Knocked me down for the count. You get my drift. I love that album. And that came as a bit of a surprise. Don’t get me wrong, I don’t think that Black Stone Cherry have one bad album in their discography. However, after their brilliant self-titled debut album from 2006 and its even more brilliant follow-up Folklore And Superstition (2008) things have been a bit up and down here and there. Third album Between The Devil And The Deep Blue Sea (2011) was a good album but also a clear shot at trying to become more commercial and getting air-play, something that didn’t suit the band all that well. 2014’s Magic Mountain was a big step up from that but no matter how good that record was, it couldn’t prepare me from the gut-punch that was Kentucky. Last years covers E.P. Black To Blues totally passed me by, probably much because the whole blues cover thang is getting old. Still, Kentucky – and Magic Mountain too – have put the expectations for the new album almost too high.

Opener and second single “Bad Habit” sets the record straight right away. With a bad-ass groove, some Led Zep influence riffing and a Coverdale/Hughes era Deep Purple funked up swing, the band shows that they mean business. A kicking rhythm and a striking chorus makes a living with a middle-break that heavies things up remarkably. It’s a killer tune and the album couldn’t have started any better. “Burnin'” keeps up the red-hot groove that’s so addictive when the band gets down to it. It’s quite a heavy piece and not an obvious choice as the leading single. But the damn things rocks in a down to the bone, meaty kind of way and it’s a killer track! “New Kinda Feelin'” gets down to pure rock and roll complete with a honkin’ piano that builds up a fat groove. It’s an edgy rocker with a live feel that brings the mind to days long gone and it makes you wanna boogie through the night along with wine, women and song. What’s not to love about that?

“Carry Me Down The Road” is a nod to Southern Rock but the heavy blues influence brings the mind to Cream as much as to The Allman Brothers. The band kicks and grooves and they’re clearly on fire here – and the guitar solo is burning the whole song up, a solo made of pure feel and perspiration. Very good indeed. The first ballad on the album is called “My Last Breath”. The tune starts out on a softer note with only vocals and an electric piano before the rest of the band kicks and makes it a blues-injected, big ballad that goes straight for the heart. It’s very soulful and the brilliant girl-gospel vocals brings another dimension to the table. The refrain is so catchy it’s almost unreal and if this isn’t a hit, I don’t know what is. Awesome! “Southern Fried Friday Night” is a more party-laden Hard Rock groover, 70’s Southern Rock style. It’s a homage to their home, a topic that shows up on almost every Black Stone Cherry record. This tune grabs you by the balls, pours beer down your throat and makes you wanna party like there’s no tomorrow. I guess we all can relate to that, right? Great tune!

“Dancin’ In The Rain” is a heavy groover, crunchy and raw that sports some mean guitar riffing and a whole bunch of Blues vibes. Chris Robertson duets with Gov’t Mule man Warren Haynes on this brilliantly catchy rocker, a song that sticks by first listen. Killer! “Ain’t Nobody” is more down n’ dirty bluesy Hard Rock complete with a slide guitar, a groovy rhythm that takes you all the way to swing town. It’s kicking and swinging and sounds like a big party – the female backing vocals sure adds to that feel – and the refrain hits exactly where it should. Great! “James Brown” is so damn groovy it hurts – and it should be with a title like that. Does it sound like James Brown then? Well, if Brown had abdicated to Hard Rock he might have sounded something like this. It sports a heavy rhythm section that makes you wanna headbang all night long, meaty and dirty riffing and earthy yet very catchy refrain that ends on very heavy note. A fabulous party rocker if there ever was one.

“You Got The Blues” is a high energetic, big grooved, bluesy Hard Rock stomper that’s really rough and will make you sweat by just listening to it. It’s very distinct and leaves no breathing room at all, just like a song like this should. And oh, Chris Robertson’s 5-year old son is on backing vocals. “I Need A Woman” needs no explanation lyrically but musically it’s Zeppelin riff-happy with a huge swing over an early rock and roll feel mixed up with a gritty blues vibe and a chorus that brings out lots of Pop elements, all of which marries just fine. Quality wise, this is the only dip on the album even though it’s not bad at all. “Get Me Over You” is raw, punchy, stripped and raunchy, very down-to-earth with an intense groove and an early 70’s Rock swagger. Fat riffing and a killer refrain brings the tune in for the win. Last comes the album’s title track, a mid-paced, smooth rocker with a 70’s based groove. It’s both country and blues infected with a Southern groove. It’s a pretty good tune but the weakest on the album – not the best way to end an otherwise brilliant album.

I said brilliant because that’s what this album is but that said, it’s not as strong as its predecessor, I think. Quality wise, it belongs up there with Magic Mountain – it’s actually a bit better –  but on the other hand, when you release such a monster as Kentucky you set yourself up for an almost impossible task topping that. But what’s clear is that Black Stone Cherry with this album have proved that they’re a band that will do exactly as they please and that record company pressures of writing radio hits are just a faded memory and as it turns out, as long as they please themselves musically, things will always work out right – the band’s brand of Hard Rock, Classic Rock and Southern Rock makes a perfect match. This album is self-produced and production wise it’s fat, meaty and rough but not without the smoothness that makes for a more easy listen. If the album doesn’t stick at first, just give it a couple more because it grows on you by each listen. And it’ll be worth the wait!

Between the Devil And The Deep Blue Sea
Magic Mountain
Kentucky