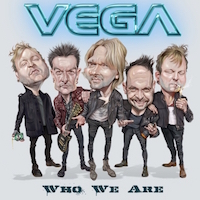 One thing I have been thinking about lately is why I sometimes choose not to check out certain bands and artists. I mean, I read about all sorts of bands and there are quite a few that fits right into the categories where my musical taste runs, but something just makes me skip quite a few of them. One reason is that there are just too many records being released and too many new bands coming along for the ride. I just can’t find the time and sometimes I just have to sort out which band to give a break and which to not pay any attention to. I know that I might miss out on some good bands that way, but on the other hand, I have enough records to listen to to last at least one more lifetime – or at least it feels that way ever so often. British melodic rock / AOR outfit Vega are such an act. As a reader of British rock mag Classic Rock Magazine, Vega is hardly a new name for me as the band have been featured in said mag quite the bit. Vega were born back in 2009 and have to date released four albums including the new one  – Kiss Of Life (2010), What The Hell (2013), Stereo Messiah (2014) and this one that you’re about to read my thoughts on. The band consists of vocalist Nick Workman, guitarist Marcus Thurston, bass player Tom Martin, drummer Dan Chantrey and keyboard player James Martin (who also happens to be married to Norwegian melodic rock / AOR singer Issa, lucky bastard) and they have been musically linked with bands such as Def Leppard, Bon Jovi, House Of Lords and Europe, which makes it even more weird that I haven’t checked them out until now. Because truth be told, I haven’t – as far as I know anyway – heard a single note from this lot until I got the link to the album in my mailbox recently. So here’s me finding out whether I have been six years missing out on a great band or if I hadn’t been missing out on anything worthwhile.

Opener “Explode” has a title really worth its name because this high-octane, energetic melodic rocker really blew me away at first listen. There’s a Def Leppard vibe to the chorus but the song do come with an identity spelled Vega. Damn! “We Got It All” is killer # 2. With a big groove, some addictive hooks and a chorus that sticks instantly, the band have a hit on their hands. For you who dug the newly released debut album by The Defiants, “Every Little Monster” is a pop-metal pearl to sink your teeth into. It would be criminal not to release this a single. There is a lyric video for the tune out and please check it out – it’s probably the coolest lyric video I have seen in a long time. The fact that its chorus is almost identical to H.E.A.T.’s “In And Out Of Trouble” is most likely just by coincidence. Time for the first ballad then. “Nothing Is Forever” takes me back to somewhere around 1988 – 1991 and of course, we’re talking a power ballad here. Yes, it is a softie and to be honest, a bit cheesy, but the tune is so damn sticky, catchy and memorable that I just have to love it. Besides, I have a soft spot for this kind of ballad. “White Flag” is the first single / video and it’s a good choice. It moves in a slower pace, but it still has a groove to it and the Def Leppard meets Harem Scarem melodies are just brilliant. In a fair world, this would be a hit. “For Our Sins” continues the mid-tempo pace but just as in “White Flag” the melodies are immediate and it sticks right there on the spot. “Generation Now” sports a big “Hysteria” (Def Leppard’s that is, not Muse) vibe and exists in the borderlands of a ballad and a mid-tempo pop-rocker. The melody catches on directly and the tune is another winner – great! “Ignite” have a late 80’s feel – again there’s a Def Leppard influence waved in there – but there’s also plain AOR vibes all over the track. I did think that with a title like that, the song would be a bit more rough, but at the end of the day, it’s still a great track, rough or not. “Saving Grace” is an uptempo pop song with hooks to die for and a big hit feel – a song for hot summer days. “If Not You” is built around a very memorable melody and a sound that takes me back to to the mid eighties and the style is AOR mixed with melodic rock – very good. The album ends with “Hurt So Bad”, an upbeat pop/rock anthem with some kick-ass melodies and a striking chorus, a great way to close the record.

Turns out that me not having checked this band out earlier was a big mistake, at least judging by this record. Vega’s music might be melodic rock with big AOR twists and some of their influences aren’t all that hard to spot, but this band really do have their own style – they do not sound like every other AOR / melodic rock band. Every song here is solid and the only negative thing with the record is that there are too many songs that follows the same, more mid-tempo pace. Well, the cover isn’t exactly bullseye either but in this age of digital streaming and downloads, I guess most people don’t give a rat about album covers. The production – signed Harry Hess of Harem Scarem fame – is also really spot on which is cool as Vega and Harem Scarem plays in the same league, both bands colored by the genre they’re in but still with their own identity. Judging by the high quality of this record, it looks like I have some back catalogue checking up to do.