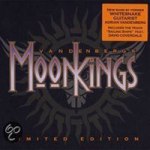 If you have any knowledge of hard rock and metal from the 80’s, then Dutch guitar player Adrian Vandenberg (born Adrianus “Adje” van den Berg) won’t need any introduction, but for you who has been living under a rock since the mid eighties, here’s some info for you. Adrian Vandenberg’s first claim to fame was with his own band – all Dutch – that bore his surname. Sure, he had previously released an album with his first band Teaser, but that album can hardly count as claim to fame. Vandenberg (the band) scored a minor hit with the bluesy ballad “Burning Heart” from their self titled debut album back in 1982. The follow up, Heading For A Storm (1983), was an even better effort, full of melodic hard rock with great melodies and hooks and some brilliant guitar work from Adrian himself, but after the band’s best effort Alibi (1985) failed to gain them any big success, the band disbanded and the next time we saw Adrian’s face was when David Coverdale had recruited him as the guitar player next to Vivian Campbell (ex Dio, now Def Leppard) in his new Whitesnake constellation for the tour of his smash hit album 1987. In fact, it was Adrian who played the guitar solo on the re-recording of “Here I Go Again” on said album. Adrian also co-wrote Whitesnake’s next album, Slip Of The Tongue (1990), with David but an accident that damaged his hand prevented him from playing on said album and Coverdale’s new cuddler Steve Vai played on – and ruined – the whole album. Whitesnake actually recorded a version of Vandenberg’s “Burning Heart” as a demo for that album, but it was never released, probably much to the fact that Adrian couldn’t play on the album. But the album failed to match its predecessor and Whitesnake called it quits after the following tour. Out of a job, Adrian brought his old Whitesnake buddies, bassist Rudy Sarzo (Ozzy, Quiet Riot, Dio, Yngwie Malmsteen, now Geoff Tate’s Queensrÿche) and drummer Tommy Aldridge (Black Oak Arkansas, Ozzy, Yngwie, Thin Lizzy, House Of Lords, now in Whitesnake again) and formed Manic Eden with ex House Of Lords singer James Christian. But Christian didn’t work out and the guys made their debut with ex- Little Caesar vocalist Ron Young instead. Manic Eden came out in 1994 and was full of awesome, melodic, 70’s based hard rock, but by then grunge ruled and the album didn’t sell for shit so the band split up. Adrian then found himself back with Coverdale and recorded, co-wrote and toured the album Restless Heart (1997) with him under the Whitesnake moniker, but in reality that wasn’t anything else than Coverdale’s solo album. And that was the last we heard of Adrian Vandenberg up until 2008 when he showed up at Whitesnake’s headline gig at Sweden Rock Festival in as a special guest, playing rhythm guitar in “Still Of The Night”. Then quiet again.

Last time his name was mentioned was when his old band mates wanted to prevent him from using his own name and sued him over that. Why they felt the urge to do something so utterly stupid is really beyond me, but I have heard stories that they want to use the name for themselves as Adrian won’t reunite the old band. Ever felt like making fools of yourselves, guys? So, without warning, the news that Adrian had formed a new band, Moonkings, and they were about to release an album hit like thunder from a clear blue sky. I had no idea that Adrian was back (I have always been a fan of his playing) and now the album is already out. So, hello head phones, let’s spend an hour together and let’s where this gets us. Now, the fact that Vandenberg has never, at least to my knowledge, been on a bad album (Slip Of The Tongue is worst one and he’s not really on that album per se) and that makes expectations rise when a guy like him have had all these years to write new music. But most of all, I was really excited to hear what Adrian had come up with after all these years. I must say that the Moonkings (Jan Hoving -lead vocals, Sem Christoffel – bass, Mart Nijen Es – drums) delivers right away. Opener “Lust And Lies” rocks with Vandenberg’s bluesy feel, “Close To You” is awesome with its big Zeppelin influence and groove, “Good Thing” has this killer groove and a chorus that sticks to your brain like glue and first single “Breathing” is a marvellous ballad much like they did in the 70’s, complete with strings and all. It really has all the ingredients for making a big hit out of it. “Steal Away” and “Line Of Fire” both have a huge Whitesnake groove and by that I mean the old Whitesnake, not the 1987 version and singer Hoving sometimes sounds much like a certain Coverdale. “Out Of Reach” is another brilliant ballad with one foot in the 70’s – I can’t help but to think about Led Zep here – and “Feel It” and “Leave This Town” are two meat n’ potatoes hard rockers that mixes the 70’s with the 80’s in a great way, they both makes me think of Badlands actually. “One Step Away” makes me dream about the glory days of Whitesnake, 1978 – 1984, a slow acoustic based rocker with a melody to kill for, “Leeches” digs deep into the 70’s and its Zeppelin-esque grooves makes me wanna reach for my beer and rock the night away and “Nothing Touches” – a love song to rock ‘n’ roll – is a classic, straight forward hard rocker – and boy does it rock!

The Moonkings leaves us with “Sailing Ships” and for every Whitesnake fan out there, that title should ring a bell. Yes, they have re-recorded the ballad that first appeared on Whitesnake’s Slip Of The Tongue album. This version is more stripped, like the version they played on the acoustic album Starkers In Tokyo (1997), but it gets the whole “all instruments in” treatment in the end of the song. Oh, yes, I almost forgot – David Coverdale actually guests on this song, doing the lead vocals – I thought I should mention that. I will also mention that this version might seem a bit unnecessary, but fact is, this is best version of the song I have heard. I f you have read this far, you might have guessed that this album will get a high rating. Yes, this is an incredible album and I loved it from hello. I love the fact that Adrian and the boys takes us back to the 70’s sound wise, but they still mix it up with the best of the sounds from the 80’s and 90’s with the technique of today. This album sounds really good. Also, despite the fact that Vandenberg has been away from music for some 15 years and the guy isn’t exactly youth (he turns 60 this year), he hasn’t lost any of his skills as a guitar player – he plays just as good as ever, if not better. The best album Adrian Vandenberg ever played on? You bet ya!