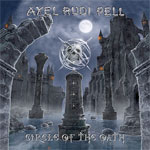 Ok, here we go again. Another year, another ARP album and to judge by the cover, they all have the same style, not many changes are to be expected this time either!

Pell’s albums are never bad. In fact he has made some brilliant stuff earlier, but the problem is that they all have a tendency to sound the same. The songs themselves, the track list order, the way they are written. It’s like you already know how every thing is gonna be before you even listen to the album.

His last album The Crest was a weak story and very close to bad. Then the songs not only lacked imagination, but they felt rushed and unfocused. The lack of imagination thing will probably never go away, but on this album the songs feels much stronger and less boring. But still, you know exactly what you’re gonna get and how the album will work. And like always, the album opens with a fast and heavy track, ”Ghost In The Black”, and it is a good song. We also know that the second song will be a catchy rocker that goes for the mainstream. It’s called ”Run With The Wind” and it works pretty well.

On ”Before I Die” he tries to do something new by moving into a sleazier territory. Nice try, but no cigar. The title track starts out like some kind of a southern american swamp blues, but turns into a  regular epic ARP song. Works brilliantly. ”World Of Confusion (Masquarade Ball Pt 2)” is just what the title says. A continuation on one of the best ARP tracks ever written. Come on. Talk about repeating yourself. I mean, they even put the chorus of the original in the song. Not ok. Still it is a very good song, but I’d rather just listen the original.  As a closer we get a 10 minute long live cover of Rainbow’s ”Temple Of The King” and it is a great cover. Singer Johnny Giolei really does this one well. But no surprise there as the guy is a fantastic vocalist. The song actually beats every other tune on this CD.

Even though this album is way better than his last two efforts, there is nothing new under the sun and he just keeps repeating himself endlessly, both in the songs and in his playing. I’m thinking; new producer and some songwriters that may help him to stop his Xerox way of writing songs. I guess we just have to wait until next year and see if anything developing has happened…