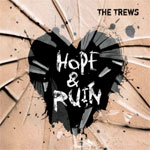 Hands up everyone who has ever heard, or heard of, The Trews. Thought so. With a stupid name like that, it’s hardly surprising that people won’t bother to check them out either. Which is really a shame, because this is a very good rock band. My first encounter with this band was with a four track CD that I got with my Classic Rock magazine and I really like what I heard, so I decided to check them out properly. This is the third album by this Canadian act and just like Den Of Thieves and No Time For Later before it, this is a very good album. However, I must stress, it isn’t as good as both its predecessors.  Somewhere along the road it seems like the band has stagnated a bit. In fact, at first listen, I didn’t think it was that good, but the CD needs some time to grow and when it sticks, it really sticks.

This band was never Heavy Metal or even Hard Rock, more a heavier kind of Classic Rock, but this time the sound scape is heavier. Both drums and guitars feels a lot more in your face than their previous stuff and it actually suits them well. Maybe they should go more in that direction in the future. The thing with album is that it contains a couple of fillers too many, whereas in the past, they really didn’t have any fillers at all. First track ”Misery Loves Company” is brilliant. It’s probably the heaviest song they have ever recorded but somehow stays true to their sound and the title track is also on the heavier side and a killer song. ”If You Wanna Start Again” is a great half ballad and ”I Find Someone Who Will” is catchy rocker that could have been lifted off one of their earlier albums. On the other hand there is stuff like ”You Gotta Let Me In”, a dull piece that sounds almost like a lullaby, a unnecessary song that should have been left off the album.

Still, this is a very good album and the band really has their own style and even if it’s not as great as their previous two albums, it won’t disappoint anybody who likes the band.

4 comments on “THE TREWS – Hope And Ruin”