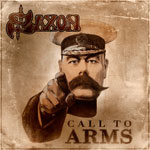 This band needs no introduction to any metal head out there, so I won’t bother. When they started out in the early 80’s they quickly became one of the biggest Heavy Metal bands, but when they tried more commercial ways and aiming for the American market in 1984 with their Crusader album, things started to go down hill. And that down hill ride went fast and got worse with each album after that. Instead of quickly going back to their roots, they sounded more and more American, mixing their metal with too much pop and they soon found themselves playing clubs instead of arenas. But since the late 90’s they have been drawing bigger and bigger crowds much due to the fact that they now are doing what they do best. And that is Heavy Metal. This new CD is very much a back to the roots album and it probably is the best CD they have released since their heyday.

”Hammer Of The Gods” and ”Back In ’79” are both classic Saxon tracks that holds true to the sound of albums like Denim And Leather and Strong Arm Of The Law and ”Afterburner” is total Metal. But of course, every band needs to look forward too to survive. Going back to the roots is one thing, but you need to develop yourselves not to become just another nostalgia act. So ”Mists Of Avalon” is a killer melodic metal track, the brilliant title track is big and epic with symphonic tendencies and with ”When Doomsday Comes” they go off on the classic rock route, sounding a lot like Deep Purple. In fact, the song has a lot in common with Purple’s ”Hungry Daze”. Another version of the title track is also included here, although this version is pretty pointless, sounding more like a traditional metal ballad. Biff and the boys have with this CD made their best album in many a year and have shown us that there is still life in this band.