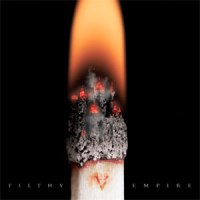 Heaven’s Basement! I really, really love that name. It must be the best synonym for Hell ever invented. Of course, with a name like that, certain expectations come along. I mean, you can’t call yourself Heaven’s Basement and play boring mainstream pop for commercial radio. No, what you need to play with a name like that is hard rock music with attitude and guts. And that is exactly what they are playing, thank you very much. The band, which hails from Britain, started back in 2008 and has prior to this, their debut full length album, released two E.P.’s – Heaven’s Basement (2009) and Unbreakable (2011), but fact is, the band has a history that goes even further back than that. Many different band members back to 2003 to be more exact, the band was called Hurricane Party and had released one E.P. called  Get This! before changing the name to Roadstar because of the casualties that were caused by the hurricane Katrina in the States that year. Roadstar in their turn, released two albums, Grand Hotel (2006) and Glass Mountain (2007) to lots of critical acclaim before once again changing their name, this time to Heaven’s Basement, but to be fair, band members were changed as well. Which leads us to the debut album of this British lot.

Now, I know that I’m a bit late here as the album has been out for quite a while, but better late than never, right? From the openers of this album, “Welcome Home” and “Fire, Fire”, I knew that: 1 – their music really fits their name and 2 – this music is really right up my alley. Both songs are high-octane energetic rockers that feels like a fist in the gut. “Nothing Left To Lose” is, while still rocking hard, more melodic and catchy and a great song and “Lights Out In London” (Hmmmm, halloo UFO…) is a great, catchy rocker. While “I Am Electric” is a riff heavy tune and a bit punky, it doesn’t work all the way as I feel it’s a bit short on nuances, but luckily enough, that song is the only dip on an otherwise high quality record. So the list goes on – “The Long Goodbye” is an awesome melodic hard rock tune, “Be Somebody” smells hit a long way, “Jump Back” is a great groover that will work wonders when you need to get some adrenalin for the party and “Executioner’s Day” is a bit noisy, but still very good and I imagine that if Motörhead decided to have a go at playing melodic rock, then this is the way they could very well end up sounding. Not that would ever happen, though.

After playing for so many years, re-start after re-start, this could very well be the album that breaks the band big, judging by the quality of the music alone. The only little thing I see as negative is that sometimes they guys have so much attitude that it takes over the sound and there are a couple of tracks that could have benefited from less attitude and more melody, but these are minor hiccups – this album is mostly full of really strong songs, good musicians and a very good production – I have a soft spot for productions that mixes rawness with the slick and clean. I highly recommend this to anyone who is into melodic hard rock with lots of attitude, aggression, passion and heart. I bet they will rock our socks off on stage. Just like the first EP with Hurricane Party said – get this!