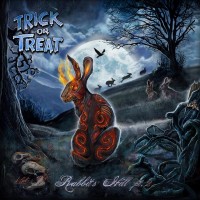 Before I got the link for this record, I had never heard of this band. Apparently this Italian power metal outfit used to be a Helloween tribute act (more on that later on), but after some years working as such – they formed back in 2002 – the band released their debut album of original music Evil Needs Candy Too in 2006 to much critical acclaim, according to the press release. Three years later the band released their second album Tin Soldier on which they managed to get a couple of well-known guests in ex- Helloween singer Michael Kiske and future Whitesnake keysman Michele Luppi where the first must have been a dream come true for the band. But 2012 had to be the most happening year for the band – and at least for singer Alessandro Conti as he was chosen for the lead singer spot in Luca Turilli’s Rhapsody. But that was also the year that they released the first chapter of their Rabbit hill rock opera, titled Rabbits’ Hill Pt 1. Now, since this is the first record I have ever listened to by the band – singer Conti, guitarists Guido Benedetti and Luca Venturelli, bass player Leone Villani Conti and drummer Luca Setti – I was pretty clueless of what this rock opera is all about but apparently it’s based on the novel “Watership Down” by Richard Adams. In short, the novel is about a flock of wild rabbits which decides to leave the meadows they’re living in because of the threat of humans to find a better place to live. There are some bits and pieces of the story changed by the band and the outlook is, from what I understand, more apocalyptic but that’s more or less what this story is all about. Parts of me loves the fact that this concept is so damn un-metal and unpretentious but on the other side I find it just a bit lame. But a lame story can still contain great music – just look at Jorn Lande and Trond Holter’s Dracula album (Swing Of Death) from last year. Still, I’m not that a big fan of power metal and this being a former Helloween tribute band I was a bit sceptic before pushing play, I’ll admit that.

Opener “Inle’ (The Black Rabbit Of Death)” kicks off hard and fast and it sounds as Helloween’s Keeper Of The Seven Keys Pt 1 line-up were still around without changing the style one bit. The Helloween tribute thing really shows here. Ok, so there is a bit of growling here and there, but that really don’t better the song. This is not bad at all, it’s just that the song is such an obvious carbon copy of Helloween that I have a hard time taking it seriously. Surprisingly enough, we get a ballad already as the second song, not a very common thing at all when it comes to metal. And not only that, the song is damn great as well. Sure there’s a bit of Hello-balladry in there but there is also something that reminds me a lot of Blackmore’s Night’s medieval style thrown in which makes the song stand out. “Cloudrider” sounds more like the Michael Kiske-sung songs from Avantasia’s two first Metal Opera albums than Helloween, but Conti’s similarity to Kiske is extremely obvious. Sometimes, like on this song, it could might as well have been Kiske singing it. “Efrafa” is a heavy power metal rocker that sounds like today’s version of Helloween only with Kiske on vocals and if it hadn’t been for the – really brilliant – mid-tempo section of the song, it would have been a real Helloween clone. The power (metal) ballad “Never Say Goodbye” is amazing, on the other hand. Conti duets with Sara Squadrani (Ancient Bards, Ayreon) and she sure is a fantastic singer. She actually brings the already great song to higher heights. The best song on the record, without a doubt. “The Great Escape” has a very catchy chorus, very hummable and that saves the song completely because the rest is – back in Helloween territory again – quite mediocre and too close to Helloween for comfort. “They Must Die” however, is a pretty strong tune. Ripper Owens (Judas Priest, Iced Earth, Yngwie Malmsteen) is guesting and he brings out a whole new sound scape here. The song stands out even though it sure has a Helloween influence, but I can also find both Judas Priest and classic Rising Force thrown in – good job. We get a three-minute heavy metal instrumental in “Beware The Train” but it’s a bagatelle and it goes in one ear and out the other. “United” breaks the mold with a killer groove and a catchy melody and it’s really nice to hear the band break out of the standard power metal comfort zone and not dress up in the Helloween suit that is all over this record. This song goes more in a hard rock / melodic metal vein and the whole tune is really great. There’s a guest vocal on it as well and since Tony Kakko (Sonata Artica) is listed here, I guess he’s the guest. A rock opera must have at least one epic track and “The Showdown” is the epic track of this album. This 11 minute piece of music is a small rock opera in itself and of course there’s the Helloween resemblance but there’s also some progressive parts, a bluesy break and one slow-paced, more melodic part, all of which makes this song a very varied piece. It ends with an acoustic, medieval, Blackmore’s Night influenced part complete with birds singing – very tranquil. A really good song but since the most of the song is more on the traditional power metal side, it kind of takes away some of the song’s greatness. The closing track “Last Breath” is a metal ballad clearly influenced by the way Tobias Sammett writes for his Avantasia project. It’s an ok song but it sounds a bit too much Avantasia light.

Where do I go with this then? Well, my first thought is that I might not be the right guy to review a power metal album, but on the other side I do love Helloween’s Kiske albums and said band’s two latest albums are really good. I also effing love Avantasia even though I might not consider Avantasia power metal per se, at least not from The Scarecrow and forward on. But to be honest, I have issues with the whole rabbit thing on this album, I have a problem taking this seriously. I mean, the black rabbit of death – I can’t help thinking about this as some sort of joke even though I know it isn’t. And then there’s music – see, the songs themselves aren’t that bad at all, it’s just when there’s a carbon copy thing going on, when a band sounds like a clone, those things are a bit too hard for me to digest. I have no problem with borrowing and even stealing here and there, even if the source is obvious, as long as the band has an identity, but on too many occasions on this record, I could might as well be listening to unreleased Helloween songs – the style, the arrangements, the sound and Michael Kiske’s twin voice on vocals. I dunno, maybe if you’re a die-hard power metal fan you’ll love this, but I’m not so I don’t. Hopefully they can break away from all this standard power metal thang and Helloween cloning because there are times on this record that shows that when they break out of their comfort zone there is potential. Maybe next time, guys.