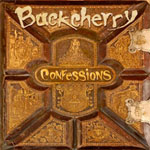 You really have to give it up for Buckcherry, or at least admire them a bit. The guys, featuring lead singer Josh Todd, guitarists Keith Nelson and Yogi Lonich, bass player Jonathan Brightman and drummer Devon Glen started the band back in 1997 under the moniker Sparrow when grunge still ruled the airwaves and a little something called nu-metal had been starting to rear its ugly head. The band released their self titled debut under the name Buckcherry (throw the letters around a bit and you get Chuck Berry…) in 1999 and had a minor hit with the cocaine fueled “Lit Up”.  After their second album Time Bomb in 2001 and not a big break around any corner, Yogi, Jonathan and Devon left the band and was replaced by Dave Markasy (g), Josh Fleeger (b) and Matt Lawrence and in 2002 they began to work on album # 3, but the sessions got aborted, the band split up and the album was never finished.

Fast forward to 2005, a time when nu-metal had completely taken over. That’s when Todd and Nelson thought it would be a good idea to resurrect the band. When you think about the kind of music Buckcherry plays, hard rock with rhythm & blues, sleaze and even pop influences, they have certainly not chosen the easy road to take their band down. Anyway, they managed to recruit new members Stevie D (g), Jimmy Ashurst (b) and Xavier Muriel (d). In 2006 their  album 15 saw the light of day and it spawned the hits “Crazy Bitch” and their biggest hit to date, the ballad “Sorry” and all of a sudden, Buckcherry was big business. The fact that melodic rock, hard rock and sleaze has made a huge come back since the mid 2000 hasn’t, of course, held the band back on their way and their two latest albums, the fantastic Black Butterfly (2008) and 2010’s All Night Long has been shipping a lot of copies and  high chart positions on the American Billboard.

While Black Butterfly was a real killer, All Night Long wasn’t as great, still a great album, but my hopes for their new effort was that it was gonna kick my butt just like Black Butterfly did. And it starts out extremely well. Opening track “Gluttony” is a brilliant hard rock sleaze attack, just the way I like my Buckcherry, “Wrath” is also a total killer, angry and hard but melodic and catchy and “The Truth” is a raunchy hard rock ballad with lots of balls – a hit to be, but maybe a bit to raw for commercial radio. “Seven Days To Die” is a wild rocker, awesome, but the fact is, two of the best songs on this album are “Sloth”, a big, dramatic bluesy ballad, with some big  guitar chords and an orchestral arrangement that makes you think of one of those James Bond theme songs, only this one rocks and the other is “Pride”, a pop oriented spoken word / sung verses that goes straight into a crazy catchy chorus. Amazing song and I love how it sounds like an experiment. “Envy” and “Lust” are both great, classic Buckcherry stuff and finishing ballad, the beautiful “Dreaming Of You” closes the album perfectly. Yes, I really like it when a sleazy rock album ends with a ballad. Also, the album is called Confessions and with song titles as “Gluttony”, “Greed”, “Wrath”, “Envy”, “Lust”, “Sloth” and “Pride” they have all of the seven deadly sins featured, so you don’t need to be a rocket scientist to figure out that this album has a theme. A pretty cool theme, if you ask me.

As a whole, I think this album is easily as good as 15 or Black Butterfly and even though this album hit home by the first listen, it has been growing on me even further and I think I can call this release their best to date. On another matter, I think it’s really unfair that a band like Buckcherry, who has so many great records made and still kicks ass live, isn’t huge by now. They are the ones who should be touring arenas, not Bon Fucking Jovi! So get out there and make them huge! You can start by buying this album.