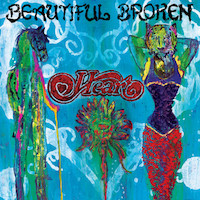 I have been pretty rough on Heart in my reviews for their recent albums and it’s nothing I enjoy one bit. See, I love Heart. I never got into their 70’s and early 80’s albums because, well, I didn’t know about Heart back then. The first Heart song I ever heard was “If Looks Could Kill” from their self titled come back album back in 1985 and the song really left me breathless. Of course, I instantly bought that record and I fell in love right there and then. The follow-up, Bad Animals from 1987, was just as good and I love both records to this day – despite the horrendous  production. The producer in question was, of course, Ron Nevison so it comes as no surprise that the production stinks – he spent the whole 80’s trying his best to ruin rock records and he succeeded every time! My favorite Heart record is to this day, Brigade (1990), this time produced by Richie Zito – a good choice as Zito’s work is superior to Nevison’s. The golden era of Heart – for me – ended with the underrated Desire Walks On (1993), a more dark and serious piece of work but still with all the great melodies they are known for. For ten years the Wilson sisters Ann (lead vocals) and Nancy (guitar and vocals) pursued other musical projects, like The Lovemongers before finally reuniting Heart in 2004. But it was a different Heart that we got. Not only was the big hair and colorful costumes gone, but the music had gone in a different direction. The AOR, pop and melodic rock of the eighties and early nineties had been traded for a more rootsy and stripped kind of rock and the sisters did everything in their power to get rid of their old sound and image, constantly speaking how their sound of the 80’s wasn’t really them, but something some marketing guy at Capitol records had made up for them, styling them image wise and bringing in outside song writers to make sure the hits were never absent. Jupiter’s Darling, their reunion album wasn’t bad at all, but it lacked memorable songs. Still, every time I listen to it, I really like it. Live, Heart stopped playing their old hits completely except for a stripped versions of “Alone” and “These Dreams”. Too bad, I think, but despite that, Heart’s gig at Sweden Rock Festival 2004 was pure magic. But after that, things have gone down hill musically. Neither Red Velvet Car (2010) or Fanatic (2012) managed to even touch their 80’s albums and the problem wasn’t the change of style, the problem was that the songs just weren’t good enough. Fact is, I was so disappointed by their recent albums that I wasn’t even sure if I would bother with this one. But of course, I can’t just let a new release by a band like Heart slip through my fingers, even if my expectations were non-existent.

But when I write “new” album, it’s to modify the truth because this record doesn’t contain any new tracks at all except for two songs, but are all re-worked versions of older tracks from their pre AOR / pop era in the early 80’s, a stunt that I’m not really comfortable with and to be honest, slightly disappointed too. But since I have burnt copies of all the older Heart records but haven’t listened to them enough to judge them (I can’t even remember one single song except for “Barracuda”), this album can at least be used as an introduction to those records. The title track that opens the record first showed up on the deluxe edition of their last album Fanatic, but since I haven’t heard that edition, the song is all new to me. And it is a really pleasant surprise. It’s a heavy rocker, very fresh and vital with a stunning main melody and the airy and melancholic synth arrangement brings character to the song. Metallica’s James Hetfield guests on guitar and some vocals, but he really doesn’t add anything to it. Even more, he feels a bit misplaced beside Ann Wilson’s amazing voice. The first new song on the record is called “Two” and was written by one Ne-Yo (Shaffer Smith) and a few other blokes. Now, I’m not really sure who this Ne-Yo dude is, but apparently he is some rapper of sorts which is a bit alarming. But we need not to worry as Heart isn’t even close to any rap on the song. Quite the opposite, the song is a ballad and a beautiful one as well. The melody is very strong and sticks right away – but it’s not a power ballad by any means – very good, indeed. “Sweet Darlin'” is another ballad, this one is from Bebe Le Strange (1980), but this one is more folk-influenced, full of acoustic guitars and strings and a dreamy arrangement. A very good song, emotional and heartfelt.

“I Jump” is the second – and final – newie on the album and this is a really great one. It’s a really heavy piece but also very big on acoustic guitars and the big keyboards and the strings brings along a major Led Zeppelin influence. It’s a killer track that makes me wonder why on Earth they didn’t put out a record of new material instead. Passionworks (1983) is the pre-Heart album that I have listened most to so the fact that I doesn’t even recognize “Johnny Moon” is pretty strange. Maybe it’s because I find the song just ok, not more. It’s slow, based on acoustic guitars and has a dark vibe, a bit jazzy and mellow. It doesn’t stick at all. “Heaven” is kind of new, it first appeared on the live album Alive In Seattle (2003), so I guess it’s the first time we get this one as a studio recording. I haven’t heard the live album so the song is new to me. It’s a fantastic song – slow, heavy and it’s somewhat soft but rocking anyway. It has an addictive melody and some of the arrangements are almost progressive – parts of it actually reminds a bit of Ayreon melody-wise – and the dreamy sound scape is brilliant. I can’t even remember when I listened to Private Audition last, but when I hear “City’s Burning” I realize that I have to pick it up sooner than later because this is another killer track. It is heavy and it rocks hard and the groove is kicking. Again, the keyboard arrangement is very Zeppelin, but not the song itself. It’s a pretty rough song with some dark lyrics. “Down On Me” (Bebe Le Strange) is a slow blues-rock number that brings on a pretty big Janis Joplin-feel – very rootsy and down to earth – a very good song. “One Word” (Private Audition) sounds like a 60’s folk-song, based on acoustic guitars and a bit on the hippie side. It’s not bad, but I’m not hooked on it at all. It’s the same with acoustic ballad “Language Of Love” (Passionworks), it doesn’t grab me one bit. Besides, it’s way to sugar-coated and syrupy for me – not my bag at all.

This is an album that brings out some mixed emotions for sure. On one hand, I really like most of the rerecordings here and the new songs bodes really for a future Heart album of originals. On the other hand, I think it’s a shame that they haven’t managed to write new songs for this record and instead promotes this album as a new Heart record when in reality, it’s just a compilation album. But I get the drift, they want to give some of those oldies a new chance, a chance to bring those out to new fans that might not have heard those records before – and to people like me, that discovered Heart in the mid eighties – and for me, it worked. The album is surprisingly good although there are few fillers on it but what it did do was that to wake an urge to pick up those old albums and give them a shot again. I would go as far as to state that this album is Heart’s best effort since the underrated Desire Walks On. Still, to me Heart are an AOR / melodic rock act, an act that should bring on those big hooks, amazing harmonies and choruses to die for and even though I know it will never happen, I wish that the Wilson sisters would return to that format in the future. Be that as it may, contrary to the last few albums, this one brings some hope into the future of Heart for me.