Another year have passed since we last enjoyed great performances from bands, the sun, beer, good food and meeting up with lots of friends at Sweden Rock Festival – a highlight of the year for me. I always have a blast down in Sölvesborg during those four days and last year was no exception. However, I must say that a red flag appeared when SRF decided to increase numbers of tickets, officially because of Iron Maiden being such a huge draw. Probably true albeit I’m guessing the fact that booking agency Live Nation now is involved has quite a lot to do with that as well. It was too crowded last year and I heard lots of voices saying that SRF was over for their part because of that. Well, it was even worse this year and the queues outside the main entrance were at times colossal – I heard some people saying they had been stuck in them for up to an hour. Not ok. How many tickets that were sold this year can only be speculated upon but it felt like lots more than last year. That’s not the way to go if they want to keep their true costumers.

Besides that, I really have no complaints and the four days spent this year were all awesome as usual. When it comes to must-see acts, this year wasn’t even close to last year’s amount for me but there was still plenty of great bands to digest – and of course I managed to miss some of the bands I had planned to watch. The first day, Wednesday 5th, is usually the day I find the least amount of interesting bands, however, this year I had five bands I wanted to catch – a clear record for me. But time and logistics made me realize that there was no way I would make in time to catch Demon in action. A pity because it would had been cool to see them again as it was ages ago since I saw them. On our way back to our little home from home we passed by the festival area and heard “The Spell” and  “Sign Of A Madman” blasting through the speakers and it sounded really good. Bummer. 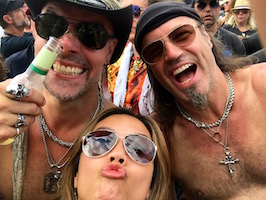 The next day I got to see almost all bands I had planned to but after headliners Def Leppard had finished their gig, I had to decide between FM and Slayer, the festival’s first clash for me. I decided on FM as I had never seen them before. Slayer on the other hand, I had seen on a few occasions before, so they drew the shortest straw. Another bummer. Friday was the day that had the most bands I wanted to see this year – 10 bands – but I missed out on a few of them. Royal Republic clashed with Easy Action and it was a no-brainer for me – Easy Action were the band I had looked forward the most to catch this year so Royal Republic had to go. But something tells me it wasn’t the last chance to see them, so to speak. I also missed Axel Rudi Pell for reasons unknown more than I got stuck at our cabin, having a great ole time so I simply forgot about him.

The great ole time at our cabin – drinking beer, listening to music and soaking up the sun – is also the reason for me missing Uli Jon Roth. Sweaty and somewhat intoxicated, I had to freshen up before heading for the Festival Stage and ZZ Top and since I wouldn’t return to my place after the bearded ones, I had sit that one out. Which turned out to be a big mistake. The last time they visited the festival – can’t remember the year – I hadn’t planned on seeing them but I did and I was pleasantly surprised. This year, however, I wasn’t. They sounded tired, old and uninspired. I left after three songs so no review there. The next band missed was Disturbed. I really dig the band and the last time I saw them, they were great. However, the cottage-party continued in the VIP area with lots of friends and I completely lost track of time and all of a sudden someone told me it was time for Kiss. Oh well, a good time is a good time is a good time. Kinda.

When Kiss had ran us over, the question was whether to stroll off to Rock Stage to catch Dream Theater. I like Dream Theater. I actually love lots of their stuff and their new album is a killer but how strange it might sound, I just don’t get a festival vibe from them and after Kiss had shown us how the big boys party, I just couldn’t be arsed, to be honest. Saturday didn’t really bring out that much of interest for me. I know how great Danko Jones is live but the cats-n-dogs raining made me stay indoors. No biggie, Jones is a great live act but I’m hardly a big fan of their records. Beast In Black are a band I had planned to see but they clashed with Electric Boys and I hadn’t seen Electric Boys in ages and since I think they’re a way better band than BIB, my choice fell on them. UFO were more of a “if I’m around” band since I’m not a fan of the band and the same goes for Styx. Saxon? Great live band but I just don’t find them interesting enough anymore. And besides, the play every second year at SRF anyway. 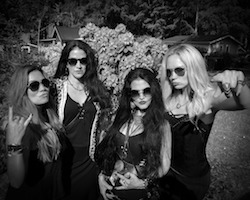 So what to make of Sweden Rock 2019 then? Well, the downside was that it was too crowded which resulted in queues that took forever to get in and it also affected the VIP area where especially the bar-queues were sometimes enormous. More people also equals more of those camping-chairs people bring along. They were everywhere, shitloads of them. They usually don’t annoy me but this year you stumbled over them even at the front of the stages. Other than that, I had a fabulous time as always. Sunshine and warm weather (apart for an hour or so at Saturday noon when the rain showed up), great music and lots of friends, both close ones and those you only meet once a year at SRF. Will I come back next year? You bet. As long as Live Nation doesn’t decide on increasing the amount of tickets even more.

To wrap this up, some suggestions for next year I had in mind: Lillian Axe, Alice In Chains, Van Halen, Cheap Trick, Black N Blue, Bombus, Kid Rock – bands that has never visited the festival before. Bon Jovi? Sure, if they reunited with the original line-up and only played songs from the five first records. Otherwise totally uninteresting. Now off to the reviews: