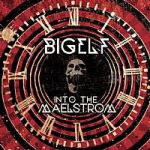 When underrated bands that should have had lots more success than they have now is talked about, the first name I come to think of is Bigelf. I first got acquainted with this band by a friend at work who praised them every day until I asked him to burn me a copy of their debut album Money Machine (2000) (I don’t count Closer To Doom from 1996 as that one is only an e.p.) and he actually bought me a real copy because he thought Bigelf should get the money and that they were too great a band to only have on a burned CD. I was floored right away and since then I have been a fan. Money Machine has been my favourite Bigelf album, right up until now. The follow up Hex from 2003 is often seen as their magnum opus and lots and lots of their fans holds that album as their favourite. I love that album too, but in my book it is equal to its follow up Cheat The Gallows (2008). Why Bigelf hasn’t got the recognition they deserve is beyond me. Great musicians, great songs and a sound of their own should really justify world stardom, but not for this lot, it seems. Yet, anyway. They were also part of the Progressive Nation tour in 2009, with headliners Dream Theater and second act Opeth, both big fans of Bigelf. I never really got the progressive part because even though Bigelf might have some progressive influences, they are nowhere near Dream Theater and Opeth in that department. Maybe that’s why they weren’t huge when that tour was over, they weren’r prog enough. I saw a gig on that tour and Bigelf were great, just as they were at Sweden Rock in 2010. Maybe it’s because band leader and sole remaining original member, lead singer and keyboard player Damon Fox is stuck with his Hammonds and Mellotrons on stage and therefore can’t act frontman as such. I don’t know, I think it looks really cool when Fox goes off on his keys like a Jon Lord on rocket fuel. But if there’s any justice in this world, things should change with the release of Into The Maelstrom, because ladies and gents, this is the elfs best effort to date.

The album kicks off in a normal Bigelf style with “Incredible Time Machine” – and incredible is just the right word for it. This sounds like The Beatles in 1967 meets the Ozzy fronted Black Sabbath on a psychedelic acid trip. Oh yeah, the song is also very catchy, if you can imagine that. “Hypersleep” really should be a hit. A steady, pretty heavy 70’s rocker with no redundant crap on it – just a rocker. Their pop vein shows up on the uptempo rocker “Already Gone”, the same with “Alien Frequency” – it comes across like rocker but is really a pop song in disguise – brilliant work and their more progressive side makes itself visible on the great “The Professor And the Madman” where their love for 60’s music lies over a 70’s foundation – wonderful! “Mr Harry McQuhae” has a more tragic history – it’s a dedication to Bigelf’s old bass player A.H.M. Butler-Jones who fell into a diabetic coma on tour in Sweden  in 2001 and remained unconscious until he sadly passed away on New Years Eve 2009. That said, it’s a great song that has a 70’s progressive vibe. The same could be said about “High”, but that has a more psychedelic influence and I can hear some Candlemass influences in “Edge Of Oblivion”. Melodic, yet very heavy. As I wrote earlier, keyboardist / singer Damon Fox is the only remaining original member and from the line up that played on the last album only Fox and bass player Duffy Snowhill remains. New guitarist is Luis Moldonado who replaces Ace Mark and as replacement for fleeing drummer Steve Frothingham they have brought in no other than former Dream Theater drummer Mike Portnoy (The Winery Dogs, Flying Colors, Transatlantic). Of course, he’s not a permanent member of Bigelf, he’s only helping them out, but their friendship was enough for Fox to write “Theatre Of Dreams” – about Portnoy’s relationship with his former band mates in Dream Theater. The song is fantastic, but it doesn’t sound like Dream Theater at all – this is total Bigelf all the way. The ending song “ITM” is a bit out there for sure, spaced out and dopey, but very catchy, melodic and warm.

It’s time for the world to wake up and discover this band for real now. If you’re already a fan, then I guess this album is a no-brainer. But if this band is new to you, I have a feeling this album could be a good way to start. The Bigelf sound is still intact, their mix of Black Sabbath, Beatles, power pop, psychedelia and prog, will always be there, but this time they feel a bit more… accessible. But that shouldn’t be taken as a bad thing at all, quite the contrary. This time, Fox has found a way to put great, memorable melodies – in all honesty, he has always had those, but there’s more of them here – on top of the distinct Bigelf sound. We got heavy guitars, a fat bass, Mellotrons and Hammonds and a big drum sound signed Mike Portnoy. But the beauty of Portnoy’s playing here is that if you didn’t know it was him playing, you probably wouldn’t have guessed it was him. He only plays what the music needs here and there is full focus on preserving the Bigelf sound. Let’s make this band huge once and for all.