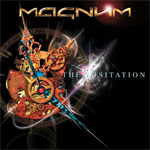 Once upon a time, Magnum was one of my favourite bands. With albums like On A Storyteller’s Night (1985), Vigilante (1986) and Wings Of Heaven (1988) they became huge in Europe. But nothing ever happened in the States and we all know that it is in the States all the big money is. So of course, they wanted to take their career to the next level, which were making it in the U.S of A. Goodnight L.A. were given a more American sound without removing the Magnum sound. Problem was that the Americans still didn’t care. If it was because the guys in Magnum never were poster boys with model looks or their sound just doesn’t appeal to americans, I don’t know. Or maybe it could have been the fact that it wasn’t as strong as their previous albums. Anyway, it totally bombed over there and their popularity had started to fade a bit in Europe as well. So after a couple of uneven albums more, the band split up.

They reunited a few years after that with two ok albums, Brand New Morning (2004) and Breath Of Life (2002), but it wasn’t until 2007 and the brilliant Princess Alice And The Broken Arrow (2007) that Magnum really hit home again. The follow-up, Into The Valley Of The Moonking (2009) was also an amazing album and so is their new album as well. The Visitation follows the footsteps of its two predecessors. Sound wise, they’re back to the mid eighties when they released their biggest albums and now songwriter / guitar player Tony Clarkin doesn’t care one bit about overseas success. Now they make records for their own damn selves and that really shows. Any Magnum fan should be really pleased with this. The production is a bit heavier than what we’re used to, but it fits the band real well. It also feels more guitar oriented as the guitars are higher in the mix than on earlier records.

Opener ”Black Skies” must be one of the heavier Magnum tunes ever. A great melody mixed with heavy guitars and a dark sound. ”Wild Angels” is just superb, with a classic Magnum pop pomp-rock sound and a brilliant melody. Feels like a hit long way. Same goes for ”Midnite Kings”, catchy melodies and a classic sound and ”The Last Frontier” is a big epic ballad, the way only a big Magnum ballad can sound. Magnum may never again find success they had in the 80’s, but when one think about how good their three latest albums are, they really should. Very good, indeed.