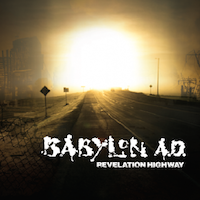 You’ve gotta hand it to Frontiers Records, they are damn good at dusting off old arena rock bands and making them reunite. Even the bands that wasn’t big in the first place. But just because they didn’t make it back when doesn’t mean that they were bad. Quite the contrary, many 80’s/ early 90’s arena rock bands that never won the hearts of millions were damn good. Babylon A.D. are such a band. They formed back in 1987, released their self titled debut album in 1989, followed it up with Nothing Sacred in 1992 and split up shortly after because they didn’t sell squat and in 1992, grunge had taken over more and more, leaving even many of the bigger bands from that era crawling in their dust. They reformed briefly in 2000 and released American Blitzkrieg, an album I never gave the time a day after watching a video for one of its songs. A horrible song, I might add. But back in the day, Babylon A.D. were a really good band and together with smaller acts such as Baton Rouge and Beau Nasty, they never got the recognition they deserved.

Songs like “Bang Go The Bells”, “The Kid Goes Wild” and “Hammer Swings Down” were featured quite frequently on shows like Headbanger’s Ball – at least they were in Europe. I was just a 20-year-old kid back then but I thought that Babylon A.D. had all the skills in the world to make it big – the killer tunes, the musical skills and the looks. But they came around a bit too late and their sound was very much in the vein of already existing bands and I guess that’s why they never made the full buck internationally. So I’m a bit curious of why a band that was never big at all back when decides to reunite decades later, like they would create a huge stir this time. Well, whatever the reason, I still think it’s cool that Babylon A.D. are a band that have reunited with all their original members  – singer Derek Davis, guitarists Ron Freschi and John Matthews (which makes guitarist Danny DeLaRosa, who played on the two first albums, a no-show here), bassist Robb Reid and drummer James Pacheco – something that’s very unusual. And as a fan of their two first albums, I was quite intrigued of what they band had come up with this time.

Opener “Crash And Burn” rips loose as a kick-ass, crunchy and rough sleaze rocker with lots of attitude and bite. The chorus is a steady punchline and it’s a good song. However, I find it a bit too standard for comfort. The sleazy punch and roar continues with “Fool On Fire”, a kicking rocker with a fat groove, a nice bluesy touch and a very catchy refrain of model late 80’s. In fact, this song could have been a lost track from their debut with an updated sound. Great stuff. The lighter “One Million Miles” is more of an uptempo, half-ballad in the melodic rock vein with a catchy, radio-friendly chorus that makes you wish for 1989 again – very good. “Tears” is pure pop albeit in an upbeat more rock suit. The late 80’s sound is all over the track and it’s not a very far cry from “Desperate” from their debut album (also recorded by Baton Rouge) so that album comes to mind here as well. Very good

“She Likes To Give It” is a sleazy and dirty rocker that screams 1990 all the way. However, the pubertal and teeny lyrics is too cliché and silly enough to make me cringe a bit. If a 22 year would have written them it might have worked but when they come from a 50+? Not so much. Musically, it’s a regular arena rocker that really doesn’t go anywhere and it feels like I have heard this song a million times before. The same goes for “Rags To Riches”. It’s not a bad song per se but it never sticks at all and the song could have been by any middle-of-the-road sleaze-rock band out there. The mid-paced, melodic hard-rock tune “Last Time For Love” comes with a some big catchiness and big hit-potential. This is pure pop-metal that belongs in 1987, a good tune that has a chorus that sticks like glue. “I’m No Good For You” is sleazy but mid-paced with a very memorable main melody and a pretty catchy chorus that puts the song on the debut album style wise. A good but not great tune.

“Saturday Night” is a big, fat party rocker with a bad-ass groove that will make even the most dull dude wanna grab a beer and raise some hell. The lyrics might be of the cheesiest kind but the whole tune comes with such fun-vibe that it’s hard not to surrender. It’s the kind of song that would make a weekend drunk audience go apeshit in a rock club and what’s not to love about that? I say they get away with murder on this one! They close their comeback with “Don’t Tell Me Tonight”, a pretty rough yet hook-laden melodic rocker with a distinct and accurate chorus that sticks pretty good. It’s a decent song but it’s too regular and I have a problem remembering most of the song afterwards.

It’s pretty clear that the directions from Frontiers was to make sure that this album went in the same vein as their two first albums – especially the debut – and it was probably the intentions from the band as well. Because that is the sound of this record – only updated for 2017. Which, of course, was the right way to go because what would be the point in going under the Babylon A.D. banner otherwise? The biggest problem with this album is that I find it a bit too bland and many songs aren’t strong enough to make a lasting impression. I don’t think the album sucks – there are some really good tunes here – but mostly the tunes are way too forgettable, which also goes for many of the tracks I do like, unfortunately. So yes, I’m disappointed because I had hoped for a big fist in the face here. Sure, I know that Babylon A.D. weren’t the most original band in the world to start with but they had killer tunes that stuck so I never cared about originality but when the song quality falters the lack of originality becomes too clear. It’s an ok album, not more. I’d go and see them live in a heartbeat, though.