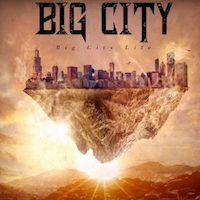 For readers who have followed this site knows that I sometimes have issues with band-names. A name that sounds shitty in my ears can sometimes result in me not checking out the band in question. But the opposite has happened as well. House Of Lords were one example. That name just got to me, but don’t ask me why. I just liked it. The same thing was the case with Big City. I don’t even know if it’s really a great name but I just like the way it sounds. Big. Of course, the name oozes of Melodic Rock / Arena Rock but that’s ok – I am a big fan of those genres after all. So, when the reviewer’s link found its way into my mail-box, I was quite keen on digesting Big City’s new album, their second.

Just like bands like bands like Audrey Horne (just like Big City, they come from Norway), The Night Flight Orchestra (Sweden) and King Company (Finland), Big Time are a band that consists of members who on a daily basis are involved in more heavy and sometimes even extreme Metal circles but felt the need to explore in Melodic, Classic and plain Hard Rock territories, even AOR at times. The guys – Daniel Olaisen and Frank Ørland on guitars, Frank Nordeng Røe on drums, Jan Le Brandt at the mike and Miguel Pereira on bass – hails from more extreme Black Metal bands such as Satyricon and Blood Red Throne but also in more Progressive Rock bands like Withem. They released their debut album Wintersleep back in 2013, digitally only, so it was a nice gesture to include it as a bonus CD with their new record. However, Wintersleep will not be a part of this review.

So. the guys kick off the album with the title track and it’s pretty clear that it is Classic/Melodic Rock we’re dealing with here. The tune is a pretty bouncy and rough plain 80’s style hard rocker, quite heavy but very melodic. It reminds me of 80’s Scorpions with a late 80’s Arena Rock flavour. It’s catchy but not a chart flirtation – a very good tune. “Cryin’ In The Night” is more plain Melodic Rock, Scandinavian style. It’s pretty laid-back with a groovy verse and a catchy and radio-friendly chorus but it don’t lack any heaviness. Good stuff! “Daemon In The Dark” comes in a mid pace, it’s heavy and quite dark but still a full on late 80’s arena rocker. Think an uptempo, quite punchy half-ballad and you’re there. Very good. “Rocket Man” is more uptempo and straight-forward with an in-your-face chorus but with softer laden verses. The track is in the Melodic Rock vein but it goes Metal when the solo hits, especially the heavy pounding drums, but then it turn Melodic Rock again. It’s a good tune but nothing outstanding.

“Stars Surrounding” moves towards progressive Metal and even though the tune is pretty rough, hard and punchy it also holds a clear Melodic Rock arrangement on top. It’s an upbeat song, not very radio-friendly but still very memorable – and it is a damn good song. Damn good! Of course, no Melodic Rock album would be complete without a ballad and “From This Day” provides us with one. It’s more of an uptempo power ballad that contains lots of Pop, AOR and even Hard Rock and the tune is ridiculously catchy – in 1988 this would probably have been a huge hit and shipped this record platinum. Love it! First single “Running For Your Life” is full-on Stadium Rock that screams 1990. With some good, meaty riffing, punchy drums and a big groovy, it’s an obvious single-choice. But even though I’m a sucker for this kind of tune, I can’t make it stick. It’s not bad all but I find it somewhat forgettable.

With “Forgive Me Now”, it’s ballad time again albeit not a power one. This one is more laid-back, melancholic, dark and emotional with an atmospheric soundscape. The gorgeous acoustic guitar also brings the song up to yet another level – this is plain awesome! “Tower Of Babylon” comes in a slower pace – heavy and dark with some blazing riffs. This tune breaks out some from the Melodic Rock formula as it brings on a more Classic Rock 70’s style mixed up with an 80’s Metal touch. But it do shake up the Melodic Rock vibes here and there and it suits the band brilliantly. Very good. They close the record with yet another ballad, the soft, melancholic and laid-back acoustic guitar based “Home Again”. The guitar sound reminds me some of Dream Theater but it’s more of Whitesnake type ballad in style. It’s quite smooth and beautiful with a gorgeous melody and the song is amazingly memorable. A brilliant closer.

Yes, Big City’s new record is a good one. It’s a Melodic Rock / Arena Rock record but the guys’ Metal roots are all over it. Song wise, it’s very melodic and catchy but never cheesy or mawkish, it’s guitar driven and even though there are keyboards almost everywhere, they are kept low in the mix and never ever takes over which makes for a more crunchy and rough sound. Production wise, I find it flawless and I really love when a Melodic Rock album is produced in a more Hard Rock way – it gives it more punch. Sure, it’s not very original and the guys hasn’t reinvented the wheel in any way but I, as usual, think that good songs makes up for that – and they do have plenty of those. As for Wintersleep, the debut album that tagged along as a bonus disc, is a good record as well albeit not as good as this one. Big City Life proves that the guys has developed quite a deal since that album.