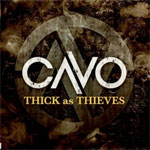 Sometimes, joining one of those Facebook groups can be a very good thing, because if it hadn’t been for one of those, I would probably never even heard of the name Cavo.  One FB-group friend linked a video with Cavo, the first single and title track of this, their new album and the song was so mind blowing that it I was stunned.

So, while I was waiting for the release of this album, I decided to check out the band a little more. It turned out that they already have two albums out, the brilliant Bright Nights, Dark Days from 2009 which spawned the minor hit ”Champagne” and The Art Of Letting Go from 2006, which I have yet to find somewhere.

The band hail from St Louis, Missouri and consists of Casey Walker on the mike, Chris Hobbs with the guitar, Brian Smith on bass and Andy Herrin on drums.  According to Wikipedia, they play some kind of post grunge. I’m not really sure what that is, but to my ears  they sound like a melodic hard rock band with a bit of a modern twist.  No matter what you call their music, they are a very, very good band that combine melodies with powerful hard rock music and they have the songs to prove it.

The stunning title track has already been mentioned, but it needs to be said that it should be a big hit in a perfect world, ”Hold Your Ground” has one of those breathtaking hooks that feeds your musical appetite only further and ”California” is one of those ballads that you can’t get enough of. On the heavier side, they bring to the table stuff like ”Circles” and ”Celebrity”, that mixes catchy melodies with groove and hardness. The hard and melodic rocker ”Run” swings with the best of them and is a clear favourite here.

Even though there are the odd filler or two, there are no songs on here that are even close to bad and I wouldn’t think twice about recommending this to anyone with a hard rock heart. In fact, I have done so at many occasions and hopefully this band will be discovered by many, many more people in the near future. When this band has recorded such a fine record, it would be such a waste not to.

So do yourself a favour and check them out, any way you can.