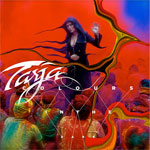 Is it third time’s the charm for Finnish soprano diva and ex Nightwisher Tarja Turunen? Tarja’s career hasn’t exactly been a huge hit since her break up from Nightwish back in 2005. Her two previous albums My Winter Storm (2007) and What Lies Beneath (2010) didn’t exactly set the world on fire. Boring songs and boring performances combined with Tarja’s high soprano voice and her broken English made for a not a very pleasant experience. When Norweigan big voice Jorn Lande made his own version of Tarja’s (no, she didn’t write it!) first single “I Walk Alone” he also showed everybody how it’s supposed to be done. His version makes Tarja’s sound pale and the two versions don’t even play in the same division. I’m also hearing that her records haven’t sold that well, which must hurt a bit when Nightwish have had their biggest sales ever with their two non-Tarja albums, fronted by Swedish vocalist Anette Olzon (who is also gone now). So for once, a reunion seems unlikely at this point. First of all, Tarja and the rest of Nightwish aren’t on speaking terms, second, Nightwish has proved that they don’t need Tarja to succeed. Which, I must say, came as a big surprise. I thought Nightwish would drop dead without Tarja, but the fact is, I had myself believing that Nightwish more or less WAS Tarja. So when we’re sitting here after all those years, I think it’s a bit peculiar that Tarja hasn’t been more open to a reunion. She hasn’t been open to it all. I mean, she’s the one who would benefit the most from a reunion. On the other hand, I can’t help but admire people who chose to go their own way, no matter how much personal gain the other way would profit.

Obviously Tarja doesn’t give up, which is a good thing, I mean why should she? With her third solo album (no, I don’t count her first pointless Christmas album Henkäys Ikuisuudesta, which according to Wikipedia means Breath Of Heaven, half of which is sung in Finnish) she has tried some new ways to approach her music. First of all, her singing is a bit different this time. Not that her operatic voice has been replaced by growl or anything like that, but she is singing in a more straight forward way this time. Purists might think that she’s selling out, but I think this is more varied and frankly, more comfortable to listen to. Of course, I guess it might be a way to gain a broader audience by being a bit more easy listening, but I believe both the songs and the overall sound benefits from it. One of the best songs on this album is the opener “Victim Of Ritual” where she still sings in her usual operatic voice but the song itself is heavier and more metal than her earlier stuff. “500 Letters” is a great song, very catchy and very much a standard hard rock song, “Never Enough” is a jawbreaker – brilliant and probably the heaviest song she has ever recorded by herself and “Mystique Voyage” is awesome, very monumental and very much Nightwish sounding. She has also always had a thing for recording covers, with the results being far from satisfying. Both Alice Cooper’s “Poison” and Whitesnake’s “Still Of The Night” have been slaughtered previously and this time it was Peter Gabriel’s turn. But no slaughter this time. Tarja has recorded her own version of Gabriel’s “Darkness” and lo and behold, her version is actually very good. Damn good, even! Maybe hardcore Gabriel fans won’t agree, but I’m not one, so I give it my thumbs up. With “Deliverance” she gets big and epic but still very catchy and “Neverlight” has some really heavy riffing, but also a very catchy melody that borders to pop – cool.

If the rest of the album had only been half as strong as the songs mentioned, then Tarja would have had a winner on her hands. Unfortunately, it’s not. Songs like the dull ballad “Until Silence” and the grandiose, but boring musical-like “Medusa” where she duets with Justin Furstenfeld, singer and guitarist in Texas rock band Blue October are both too bland to even get to be called fillers. “Lucid Dreaming” is a filler. And no matter how much I like many of the songs here when I listen to them, they are easily forgotten when the album comes to an end and the whole album feels somewhat uninteresting. That said, there’s no doubt that Tarja has recorded her best solo album by far with this one. If you’re a Tarja fan, then this album is an obvious buy, if you thought the previous albums had some potential, you’d definitely want to check this out, but the rest of us might wanna give this album a bunch of spins before emptying the wallet. What’s really clear, though, is that with this album, Tarja has made some giant leaps forward.