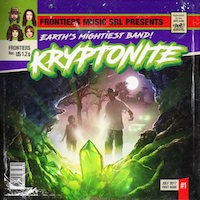 “Sometimes musicians are put together who only know each other from afar via their respective recordings, but something clicks and triggers a magical moment. That’s exactly what happened when Jakob Samuel from The Poodles met up with producer Alessandro Del Vecchio. Together, they set off to work on a new band that could offer lyrical concepts that are deep and intelligent with music that operates within the genres they excel in. And most importantly, has a great energy and impact. Together with executive producer Serafino Perugino, they handpicked each musician to be part of their vision for a strong lineup of young and hungry Swedish musicians that would be ready to go out there and kick some ass. Pontus Egberg, formerly of The Poodles and now the bass player for Treat and King Diamond, was the first one to enter the picture, followed shortly thereafter by Robban Bäck of Mustasch / Ammunition (ex-Eclipse, Sabaton). The choice of guitar player fell to the young and immensely gifted Michael Palace. Michael showed his huge talents as a writer and performer on his band Palace’s debut album and on several songs he has already written for the label.”

That was an outtake from the press release I got from Frontiers. Now, I usually don’t copy-paste press releases like that but this one pretty much described everything that could be said of this new band and its members. I’m not gonna go in a rant about Frontiers and all their million projects but something told me that this album would be a little more genuine, more like a real band instead of a project, if you will, an album that didn’t sound so much same same that many of those assembly line written records actually do and I’m pretty sure that these musicians wouldn’t just go into the studio and record just another Frontiers written record without being involved in the song writing and putting their personal touches on the music and the production. However, knowing the record company in question and where the involved musicians musical influences lies, I was pretty sure in what genre this band would play – melodic hard rock and AOR. Anything else would be a huge surprise. But that didn’t make me less interested in listening to this record, I have been curious of this lot since I heard about this team-up.

So, first single/video “Chasing Fire” opens the album and it sounds pretty much exactly how I had imagined. Predictable? Well, yes, but it doesn’t really matter because it is a damn good song that ends up somewhere in the middle of melodic hard rock and AOR. And no, it doesn’t sound like the thirteen-a-dozen other Frontiers projects. I don’t have a credit list at hand, but by the fact that the tune sounds like a mix of The Poodles and Palace, my guess is that both Samuel and Palace had a hand in the song writing here. “This Is The Moment” is single number two and a single it deserves to be. This is pop metal with a huge 80’s feel and it sounds more or less like Palace with Jakob Samuel on vocals. The chorus hits like a ton of bricks and is impossible to get out of the brain once it’s there – not that you’d want to. “Keep The Dream Alive”, the latest single, sounds like it’s coming right out of 1986 without sounding dated one bit. I’m also getting a big Treat vibe from it, something that can never be wrong. Do I even have to say that the chorus is a total KO? Thought so.

“Fallen Angels” might be a title that have been used to death but who cares when the song is as good as this? It’s a soft rock number that lies somewhere between West Coast rock and AOR and has a million hooks and a chorus to die for. Stuff like this makes me smile – brilliant. “Across The Water” is slower, darker and a bit mellow laden. It’s more of a grower even though I found it really good at first listen. It’s cleverly arranged, has a good melody and the chorus works its way into your mind – good stuff. “Love Can Be Stronger” is a rockier track and again, Treat comes to mind here with a bit of Poodles in the mix. The groove is big, the main melody is fantastic and it has an awesome refrain but it’s more an album track than a radio single – and that’s only a good thing! “Knowing Both Of Us” is the album’s big power ballad and no melodic rock / AOR album is complete without one – if it’s a good one and not too cheesy. Well, this is a killer one, it’s not too cheesy even though the refrain is huge, radio friendly and very hit laden. How brilliant!

The guitars are more in your face in “Get Out Be Gone” and is more of a striking rocker than most of the previous songs. It’s still very much a melodic rock number but a bit rougher. I like it when AOR music gets rougher so thumbs up for this one. “One Soul” is catchiness deluxe. The tune starts out with a verse that is a bit laid back, but the pre-chorus takes the song up a bit before the whole thing explodes with a majestic chorus that just screams the late 80’s. A mix of early Alien and Palace is a pretty good way to describe it. It sure tickles my cheese-vein – great! “Better Than Yesterday” is a hard rock fueled melodic rocker and again, I really love it when an AOR band rocks things up. This really could be an unreleased Poodles track – very good. Closing track “No Retreat, No Surrender” is a steady rocker that leans more towards plain hard rock than AOR or melodic rock and I actually get a bit of a Rainbow feel from the song. It’s punchy, groovy and melodic but also so catchy it hurts. It’s the best song on the album, in my opinion. What a great way to close an album.

Yes, this album sounded pretty much the way I had expected – melodic hard rock with huge AOR vibes. There’s nothing new under the sun here, but I don’t think it was supposed to be new or revolutionary. This is simply a bunch of musicians – very good musicians – that plays and writes the kind of music closest to their hearts and it shows. The songs are all solid and the involvement of Palace and Samuel is pretty obvious which makes this not just another Frontiers built project, it’s very Scandinavian sounding. They also have a world-class rhythm section in Egberg and Bäck. The only thing that I have to pick on is that the production could be rawer. I mean, it’s a stellar production but as I wrote, I like it when the guitars are crunchy and the drums bangs hard – I just like this kind of music heavy. Still, that’s not something to get all worked up about as the songs are still great. For lovers of melodic rock and AOR, this album is not to be missed.