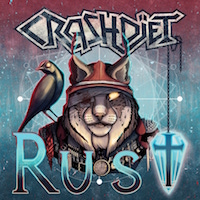 Would anyone have blamed Martin Sweet (guitar), Peter London (bass) and Eric Young (drums) if they just hung in their stage-gear in the closet and bailed music after their third singer went AWOL? I sure wouldn’t. Few bands have been struck with so much bad-luck like this band has when it comes to having the rug pulled out right under their feet – time and again. First the sad death of original singer Dave Leppard after one album, an album that gave them quite a big fan-base right off the bat. The replacement singer Oliver Twisted became Olli Hermann and started his own band, the underwhelming Reckless Love and when they thought they had found a singer that would stick it out for the long run, the perfectly matching Simon Cruz, the guy bailed after two records, never to be heard from again. Come to think of it, where the hell did Simon go anyway? After four records it sure looked like the Crashdïet saga were over – but I guess fate wouldn’t have that The Savage Playground should be their retiring album, thank you very much.

In early 2018, the news came out that the band had regrouped and found a new singer in a young dude named Gabriel Keyes and shortly after the band presented their brand new single “We Are The Legion”. However, it wasn’t certain if that single would be a one-off or if a new album was in the making. What was clear, though, was that in Keyes they had found one helluva singer, without a doubt their best one to date. What we didn’t know was how he was as a frontman and how that would work out. As a singer, Keyes outdid Cruz but Cruz was (is?) a brilliant frontman, born for the stage and with that came some enormous shoes to fill for Keyes. Their gig at Sweden Rock this summer showed a frontman that wasn’t really warm to begin with, slightly insecure but who worked his way in as the show went along and when the show was over, it stood clear that Keyes will have no problem fronting this band in the future.

When that smoke had cleared, it was decided that yes, a new album was in the works. But with the fifth album containing singer # 4, this album is a trial by fire if any of their albums had been one. Did the new-born Crashdïet still have what it takes in that department? “We Are The Legion” was promising, to put things mildly. Fact is, the damn tune totally knocked me off my rocker the first time I heard it. Everything about the song screams Crashdïet but I’m not sure I’ve ever heard such strong tune from the band – until then. It’s a melodic Hard Rock tune fueled with gritty sleaze where parts reminded me a bit of Skid Row’s “Youth Gone Wild” and with a refrain catchier than a STD from hell. Full of hooks and a pop-laden main-melody, the tune is also aggressive, loud and full of attitude. “If the rest of the album is even half as killer as this tune, they have crystal-clear winner on their hands”, I thought to myself. It sure do bodes well!

And as to say “hey, we’re back and we take no damn prisoners”, the guys open the album with the latest single and title-track that kick starts with a rumbling bass-line and some edgy guitar riffing borrowed from Mötley Crüe’s “Dr Feelgood”. It’s rowdy, gritty and here to kick up dust and with a striking, Bon Jovi smelling pre-chorus – catchy as can be – that takes us to the short and concise refrain that actually reminds me of Ghost’s “Rats”. Nothing new under the sun, you might say and all I can say is, so what? Crashdïet has always done things like this but they also sport a style that really can’t be no one else. I’m stunned. What a killer. I guess it’s their new live-opener as well. “Into The Wild” follows, bumpy, rough and in-your-face. Slammin’, glammy verses that strikes like a fist in the gut is followed by a distorted, half-spoken pre-chorus that glances towards Shotgun Messiah’s “Don’t Care ‘Bout Nothin'” that takes us into a spot-on chorus with a caseload of hooks. There’s also a slow, laid-back yet heavy mid-break that holds a slight Celtic vibe as a breather. Damn, this is some amazing stuff!

The third single “Idiots” – not the most obvious single choice –  is a raw and aggressive hard-rocker that goes into the kind of Metal Skid Row used to do, sleazy and attitude-laden with a punchy but not too single-friendly refrain. It’s more of an album track that will probably kick mud in your eye live. And no to forget, a kick in the nuts at the “haters, fakers and the energy-takers”. Do check out the video too. For us who grew up with Heavy Metal Parking Lot, Wayne’s World, The Decline Of Western Civilization – The Metal Years and, well, Europe In America, it’s a strike of genius. In a mid-pace, close to a ballad, fourth single “In The Maze” comes along for the ride. The alternative twist on the guitar and the very pop-laden melodies takes the tune a bit outside of the Diet-box. That said, it also comes with a slight nod to late 80’s Whitesnake and speaking of Pop, the amazingly catchy chorus is a rock-pop marriage made in heaven. Very good.

“We Are The Legion” follows which takes us straight into the next outside-the-box number “Crazy”. Where the song’s verses are all classic Crashdïet – gritty, crunchy, dirty and rowdy, the song also provides us with a refrain so catchy it’s stunning. First of all, the refrain takes an almost 180 degrees turn and switches from dirt-sleaze into pop-land. On a mellower outlook, the refrain holds a melody that’s impossible to get rid of once heard – I hummed the damn thing for days after only hearing it once. Crashdïet has always known how to work catchiness but I don’t think I have ever heard a refrain this addictive by the band since “Chemical”. So guys, this needs to be a single because you have a bonafide smash-hit on you hands here. On the other hand, I know these guys has never bothered with trying to be hit-friendly and “Chemical” was never a single either, so… But it’s an amazing song.

The Generation Wild vaults was opened and “Parasite” was finally to see the light of day – and after only one spin, it’s puzzling that the song wasn’t recorded for that album. It’s a gut-puncher of a song, see. Tough, filthy, heavy and raw with dirt under its finger-nails the song comes on as a ravaging monster. The verses contains some kicking and bouncy rhythms and crispy guitar while the pre-chorus holds back some only for the chorus to explode and hit you like a wrecking-ball. It’s pissed-off and raging but also slammin’ catchy. How awesome. Yet another turn is taken by the slow pop-ballad “Waiting For Your Love”. It’s dark in mood, there’s a drum-machine added and holds a somewhat experimental vibe – at times it reminds me of some of the stuff on H.E.A.T.’s latest album albeit a bit heavier with a more sullen ambiance. It’s not radio-friendly catchy but it’s still very memorable – and I have never heard Crashdïet sound like this before. A bold move that totally works.

On a furious note, second outing “Reptile” runs off like it’s been set on fire an bathed in gasoline. Fast, rough and raunchy with a riff borrowed from “Ace Of Spades”, the song tells us how Motörhead might have sounded if they stumbled into sleazy Hard rock with poppier undertones. Coming into the chorus, Hardcore Superstar comes to mind – if they had Martin Sweet as a co-writer. Aggressive riffing over a hard rhythm-section with black catchiness in the melodies brings the tune home. “Stop Weirding Me Out” is uptempo and straight-forward with a kicking groove and a striking main-melody. In the vein of 80’s glam-metal, the mid-paced chorus is contagious with a big groove and the tune grabs me right from hello. Great! They round things off with “Filth & Flowers”, a straight ahead rocker, kicking, rowdy and balls-to-the-wall early 90’s sleaze-fueled. It’s rhythmically gritty with a catchy enough refrain but all in all, it’s weakest track on the album without being bad.

I know it’s never been cool or hip to dig Crashdïet and to throw out an almost full monty score for one of their albums will probably not be looked at through gentle eyes from the more pretentious part of the Hard Rock/Metal community. Do I care? Not one fucking iota! Yes, I know that the diet-dudes nicks shamelessly from their heroes and wears their influences visually on their sleeves – and they don’t give a shit or apologize for it one bit. But Crashdïet has never been clones and they have always had their own style – it’s not that hard to spot a Crashdïet song quite fast. I’m impressed here. With Rust, Crashdïet has not only tried some new strokes musically – which makes this their most variable album to date – or the best sounding one, they have also written and recorded their best album of their career – with the best vocalist of their career at hand. I don’t use decimals in my rating system but on this album I wish I would because it’s sniffing around the full score very closely. Thanks for the K-O, guys!