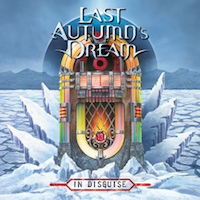 Already a new year, huh? I had just learned to write 2016 when it was time to write 2017 instead. And for AOR fans, another year also means a new album from Sweden’s fastest working melodic rockers Last Autumn’s Dream. I think that LAD holds the record for most reviewed albums on this site. Being an (almost) all studio project with no touring what so ever, the guys (read singer Mikael Erlandsson and drummer Jamie Borger) can concentrate on writing songs and release an album a year, just like bands did back in the day. I like Last Autumn’s Dream – especially since Erlandsson and Borger took over most of the song writing. To be honest, the band’s first seven albums, released from 2003 – 2010, never impressed the hell out of me, even though I believe they got better and better with each release. For me it all started with their 2010 release Yes – it’s actually still my favorite LAD album – and I have been a fan ever since. That said, I think that things have been a bit samey when it comes to the songs on their last albums, a little more variation would do them good. One thing they have always been good at, though, is doing covers. Jeff Paris, Beatles, Michael Bolton, REO Speedwagon and Sweet are few artists that LAD has covered – with the honor. When it was time to plan this album they had so many choices for cover tunes that they decided to take it all the way and record a covers album.

Now, this isn’t exactly a revolutionary method, many bands and artists have done cover albums lately but only a few have succeeded with the task – way too many cover albums are predictable, half-assed and I get the feeling that many are made because the bands were suffering from writers block or from pure laziness. But what makes this album interesting is that the boys decided on not to take the easy way out and record songs from the usual suspects, instead they picked songs they loved back in their younger days and most of them obscure AOR and melodic rock songs. Fact is, there are songs on this album I have never even heard (of) before. And on the few occasions the usual suspects do come along, it’s not the hits or their most popular songs that were chosen. The only artist that I know has pulled off a stunt like this before is Norwegian singer Issa on her covers album Can’t Stop (2012). If done the right way, a project like this could be very interesting – and pretty damn great. This is an album I really looked forward to sink my teeth into – and since I really dig the covers they had recorded in the past, I actually had some high expectations on this album.

The album opens with the old Streets (Mike Slamer from City Boy and Steve Walsh from Kansas) tune “If Love Should Go” and all I can say is: Finally! I have been in drummer Jamie Borger’s face about LAD covering this song for their last three albums now and after a lot of “we’ve been talking about doing that song”, they finally got down to business. And what a killer cover they have made. It should have been a huge hit back in 1983 and it should be one now – I love the original and I love this version. I don’t know much about Steve Miller Band – to me Miller is the space cowboy and that’s all I know by him – so LAD’s cover of SMB’s “Jet Airliner” is my first acquaintance with the song. And a brilliant tune it is – I can’t believe I have never heard it before. It’s groovy, melodic and a chorus so catchy it hurts. I checked out the original just the other day and even though that’s a killer as well, I actually prefer LAD’s more crunchy version. “Working For The Weekend” (1981) by Loverboy is one of two songs on this album that became big hits back when and love it or hate, but I don’t think anyone haven’t heard it. LAD’s version is very much in par with the original, but who cares, it’s a great song and the guys totally nails it. My all time favorite band is Sweet, it was the first band I ever loved and the band that got me into rock music – and the first Sweet song I ever heard was “Wig Wam Bam”. No one fucks with that song – cover it and I will listen to it with extremely critical ears. But this is a band made of Sweet fans and they wouldn’t cover a tune like this if they weren’t 100% sure they could do it justice. And they do. They have given it a raunchier feel – which suits the song well – and they hit pay-dirt with it without any doubt – a killer version!

John Miles is another dude I have never heard (or even heard of) before. Released on his 1977 album Stranger In The City, “Slow Down” is the kind of song I really should know because now when I hear it for the first time, I can only surrender to the fact that it’s an amazing tune. In the hands of LAD, it’s more melodic hard rock than AOR – fat guitars, thunderous drums, a swinging groove and all the hooks in the world – brilliant. Next up is “Need A Little Loving” (1980) by City Boy (the second Mike Slamer feature on this record). I have a couple of burned City Boy CDs at home, but I always found the band a bit uneven. This song, however, is a new acquaintance for me and all I can say is that I probably own the wrong City Boy albums because this tune is awesome. Angel is another band I have been aware of for ages, but never actually listened to. Back in the 70’s they were hailed as the next mega hard rock band to be after Kiss, but that never happened. LAD has covered the song “I’ll Bring The Whole World To Your Door” from the band’s last – and poppiest – album Sinful (1979) and it only took me one listen to get it through my skull that Angel are a band I have to check out because this song is a magnificent little pop pearl with a chorus so sticky you can use it as wallpaper glue. This is contagious stuff – and then some! I don’t know that many people who are familiar with Canadian band Headpins, but the sleeve notes on this album tells me that drummer Borger, just like me, discovered this brilliant band when they supported Whitesnake on their 1984 Slide It In tour and was hooked. I have always loved their song “Just One More Time” (1984) and that that song never became a monster hit is beyond me. So I’m really happy that LAD has given it a new life here. Their version is a little bit more AOR than the original, but the tune is totally spot on and one of my favorites on this album – great!

The song that stands out the most here is ABBA’s “When I Kissed The Teacher” (1976) because it’s the only non-rock song. But in the hands of LAD, it have been turned into a bona fide AOR rocker – and you know what? It fits the song like a glove. A brave move, but they really hit bull’s-eye with it. With a total Kiss freak like Nalley Påhlsson in the band it’s completely out of the question not covering a Kiss song and thank God we weren’t given one of the hits here. Sung by Nalley himself, the extremely underrated “All The Way” (Hotter Than Hell, 1974) gets LAD:ed and even though I have always loved that song, this is first time I actually get just how catchy the tune is. Påhlsson sings it with the honor and in the hands of LAD, it’s melodic rock heaven! Bachman Turner Overdrive is a band I have listened very little to, in fact I only know a few hits by them. LAD have covered “Hey You” here. A new acquaintance to me, I can only surrender to the memorable refrain, complete with hand-claps and a “sha-la-la-la” choir in the chorus. A killer album closer. For all of you who wants to spend shitloads of extra green on the Japanese edition, there’s yet another track for the taking. It’s called “Long Gone”, originally written and recorded by German AOR / melodic rockers Fair Warning –  a pretty odd choice, I must say. It’s a soft ballad, based on piano and vocals and also the only song that doesn’t cut it all the way. It’s not bad, only forgettable.

I will probably get some crap for the high rating I’m about to give this record because a cover album is never any good, right? Wrong! Many cover albums are real stinkers, I’ll admit to that, but there a few really good out there and this one is easily one of the best cover albums I have lent my ears to. Firstly, there are no obvious choices here and many songs could might as well have been LAD originals as far as I’m concerned – and I’m sure I’m not the only one who’s not familiar with some of the tracks here. Secondly, these are songs played by fans more than musicians, songs that the guys truly love and it doesn’t take more than one spin to hear the love and passion the songs have been treated with by the band. This album really shines, it rocks and the guys has given them their all to makes sure the songs gets the treatment they deserve. And let’s not forget the brilliant musical skills of LAD’s members – world-class! It’s easy to ignore the fact that this is just another cover album and just take it for what it is – a f**king brilliant melodic rock / AOR album. And it’s probably my favorite LAD record as well.