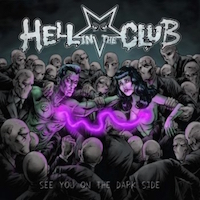 The first thing I thought when I got the download link for this record was: “What the Hell of a name is Hell In The Club?”. And then I saw the cover and thought: “Is this for real? Is this some kind of joke?”. Something in me just couldn’t take this seriously, but I just had to listen to the album and hear for myself. But I must admit that I thought that I was in for a laugh. But as we all know, judging a book (record) by its cover is stupid – and unfair. No, I would give this band the same fair shot as every other record that I sink my teeth into. HITC are an Italian band and this link was the first time I had ever heard of them, but apparently the band released their debut album Let The Games Begin in 2011 and since then two more albums – Devil On My Shoulder (2014) and Shadow Of The Monster (2016) – have been released. The press release tells me that this album is for fans of Crazy Lixx, Mötley Crüe, Crashdïet, Helloween and Def Leppard (that’s me, folks) which caught my interest, but some of the members have their homes in a very different genre. Lead singer Dave comes from folk / power metal band Elvenking and bassist Andrea “Andy” Buratto comes from progressive power metallers Secret Sphere, bands I’m not that heavily into. Also, the producer of this album, Simone Mularoni, is the guitarist for melodic prog metal rockers DGM. So, I wasn’t really sure what to expect here.

So “We Are On Fire”, the first single, starts the album with a bang and I must say that I was taken off guard by what I heard. A sleazy hard rocker, dirty and clean at the same time, with a pop metal refrain and a slight touch of punk – and the tune is catchy as a motherfucker. Besides that, it sounds good. Really good. “The Phantom Punch” comes in next. It stands on heavy metal ground, but sport riffs picked up right off the Sunset Strip and a chorus that breathes AOR, the Scandinavian kind. It’s a bloody catchy tune and all of a sudden, I feel like an idiot because of my first thoughts when I saw the album cover.  This is great some great stuff. “Little Toy Soldier” is a typical American sounding hard rock belter and I can spot both Ratt and Mötley Crüe here, albeit with a big pop feel. And I must say, it got me thinking of Steel Panther – musically, not lyrically. Great tune. New single “Houston, We’ve Got No Money” is a classic melodic arena rocker signed Sunset Strip 1991. It comes with a killer groove and comes across as a hybrid of Ratt, Dokken and Poison but it also brings “newer” arena rock band such as Crazy Lixx to mind. A very fun-loving catchy party rocker.

The big arena rock continues with “A Melody, A Memory” that takes us on a nostalgia trip back to 1990. Big riffs, big hooks, a shamelessly but wonderfully slimy melody and a chorus so catchy it could have been an STD in any Red Light District in the world. So awesome! And the über-catchiness continues with “Showtime”, a grand pop song with a big arena rock arrangement and a spot-on hard rock groove. This fantastic pop-metal stomper puts me in a time-machine back to 1989 and makes me not wanna go back. Brilliant! HITC goes total sleaze with “The Misfit”, like Faster Pussycat with a big pop feel, but there’s also a slight punky vibe here that makes tune more attitude-laden. Very in-your-face, rough and cocky. A good song that don’t make it up to great. “Withered In Venice” starts out slow, heavy and dark, on the border to a ballad. But it doesn’t come with any 80’s power ballad cheese. It’s more atmospheric and spooky and I guess they went for an Alice Cooper vibe here. It’s not skin-crawling like The Coop is but it’s still a damn good song.

“Bite Of The Tongue” is a hard-hitting, straight forward hard rocker on the melodic side that belongs in the early 90’s. I’m thinking Slaughter, Warrant and Dokken on their more metal days – very distinct and kicking. Yes, I like it very much. They close the album with the album’s epic tune, the almost 8-minute long “A Crowded Room”. It starts out as a slow, emotional piano ballad but soon turns into a melodic rocker where Ratt meets Dokken meets early Def Leppard. The chorus changes the tempo of the song into a mid pace and a chanting and a catchy fist-in-the-air sing-along-ish melody and a steady, ballsy rhythm tags along. We also get a middle-break where the boys goes into a dance-hall like, quite symphonic thing that stands out like a sore thumb but fits the tune brilliantly. The tune then turns back into piano ballad mood before it ends with a cinematic, horror movie-like sound scape with a creepy feel reminiscent of both Alice Cooper and King Diamond. A very cool – and unexpected – way to close the album. I like the progressive way of thinking and the tune is a monster – my favorite on the album.

I’m pretty sure that HITC will get their fair share of beatings and name-callings over them by some rockers, but the thing is, these guys can really write some bad-ass, catchy, happy-go-lucky melodic hard rock tunes and the fact that they’re completely unpretentious and doesn’t give a shit makes this album a very joyous experience. Also, the fact that they are only out to write songs that they love, from a time they (probably) love and miss makes this record very honest and dynamic. There’s nothing deep here, HITC are all about entertainment and even though the hooks and catchy melodies are everywhere, the album is still full of adrenaline, attitude and charm and their 1988-1991 take on hard rock mixes metal, hard rock, pop, sleaze, glam and even some punk in a brilliant way. It’s a party record and who doesn’t love a party? Well, I certainly do. An unexpected winner.