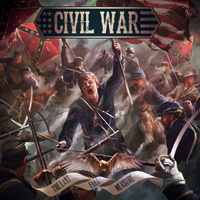 If it hadn’t been for Sweden Rock Magazine, I might not had checked out Civil War at all. See, three of the members of this band used play in Sabaton, a band I’m not – to put it mildly – a big fan of. On top of that, Civil War do play a kind of power metal that isn’t that far away from what Sabaton plays and since I’m not a big power metal fan per se, chances that I would bother with this lot are slim. But since they gave away free copies of their debut album The Killer Angels (2013) to the subscribers of said magazine, I would have been stupid not give it a least one shot. Don’t ask me why because I’m totally clueless of this, but even though every inch of screamed that I shouldn’t like that album, I did. This is melodic heavy metal with clear power metal influences, but what sets Civil War apart from many other power metal outfits is the singer. Usually power metal singers are in high pitch and very falsetto laden, but Civil War managed to get a singer – Nils Patrik Johansson – that made them sound different. Johansson has a deep voice that shows off his Ronnie James Dio and David Coverdale influences, influences that isn’t all that common in this genre. But it wasn’t only the singer, this band has some really awesome tunes as well and the follow-up Gods And Generals (2015) proved that the debut album wasn’t just a lucky shot. Now it is time for the band to release the third and final part of the trilogy that started back in 2013 and after two really good albums, there are expectations to meet.

But things doesn’t start out all that well. Opener “Road To Victory” is a fast, blazing power metal stomper that hits hard, but unfortunately, the song gives away too many Sabaton vibes for comfort. It’s not bad and Johansson sings the hell out of it, but it’s not really my bag, I’m afraid. But things shapes up already by song # 2, “Deliverance”. This song leans more towards heavy metal than power dito and it is a groovy rocker with a really good melody that sticks already by first listen. It’s still heavy enough for some good headbanging if that is your thing. “Savannah” is more of a pop song in a heavy metal disguise and the fact is, Civil War could easily have participated in the Eurovision Song Contest with this tune. It’s catchy as Hell and it has a galloping rhythm that makes it even catchier. Since I have a weak spot for songs like this, I surrender immediately. “Tombstone” starts out with a sound reminiscent to a circus or a carnival that wouldn’t be wrong for a musical of some kind. But when the metal kicks in it’s all classic Civil War, fast and aggressive, but with all the hooks in the world. “America” is another killer, a big and bombastic metal rocker with an Accept influenced guitar melody and a chorus so sticky you can put up wallpaper with it – bloody awesome!

“A Tale That Never Should Be Told” comes with a Scottish arrangement and a melody to die for. It’s grandiose, heavy and ultra melodic – exactly the kind of song I want to hear from these guys. “Gangs Of New York” is more mid-tempo heavy metal with a chunk of power metal with a good melody. It’s not as strong as most songs on this album, but still an ok song. “Gladiator” is a faster, go-for-the-throat type of song that brings Yngwie Malmsteen’s more metal moments to mind. Still, the melody is all Civil War. Again, not one of the stronger songs on the album, but it’s ok. “People Of The Abyss” strikes hard and is a pretty good metal tune but somehow if feels like I have heard this song before somewhere. Not bad, but it doesn’t rock my world either. The “real” album closes with the title track which also happens to be my favorite track on the album. It starts out with an organ, actually it sounds like a church organ, but it soon bursts out into a mid-tempo track that is more hard rock than metal, but with a sticky chorus that just screams Civil War, but in a more melodic hard rock way with twitches of both pop and AOR, if you can imagine that. The guitar solo has a lot of Accept in it and I also hear influences of both Iron Maiden and Yngwie Malmsteen in the song – I guess it’s the diversity that got me so hooked on the tune. There are also two bonus tracks for the ones who gets the special edition. “Strike Hard, Strike Sure” is hard and fast and even borders to speed metal at times and I’m getting a NWOBHM-vibe, very in your face. It’s an ok song, but it doesn’t really stick. Then there’s “Aftermath”, a ballad and a much better song. There’s some Irish, Thin Lizzy-like sound in the guitar melody and the chorus comes with choir like backing vocals, making the track bombastic and overblown, in a good way – great song!

Again, Civil War has made a really good album here, but I must stress that I don’t find it as strong as its predecessors and we get a couple of fillers too many. Which leads me to my question – where will the band go from here? This is the final chapter of their trilogy and I get the feeling that the band has taken their style as far as they can. They do have a sound of their own, but on this album, it feels like the guys has run out of ideas, like they’re on repeat when it comes to melodies and arrangements. Also, where can you go with a name like Civil War? Have they painted themselves into a corner there, maybe? It’s not like I suggest that the band calls it quits, but they need to figure out how to keep up their brand without releasing the same album over and over again, how to change without abandoning everything they have been building up throughout the years. Oh well, that’s a future “problem” and for now we have a really good metal album to sink our teeth into.

The Killer Angels
Gods And Generals