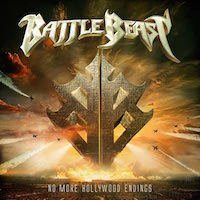 Only a month prior to the release of this record, former Battle Beast guitarist, founder and main-song writer Anton Kabanen released the new album From Hell With Love with his new outfit Beast In Black. It was a punch in the gut kind of album and just like its predecessor, Berserker, it kicked ass, sounding a lot like Battle Beast albeit with a male singer. Battle Beast’s first album without Kabanen, Bringer Of Pain (2017), was a substantial follow-up to 2015’s brilliant Unholy Savior and showed that Battle Beast didn’t have any problems to maintain their sound and to write great songs without Kapanen. However, Kabanen’s Beast In Black are breathing down Battle Beast’s neck with two albums just as good as his former band’s. When Battle Beast now are releasing their second album without Kapanen, they have a lot to prove. Was Bringer Of Pain just a lucky strike or will Battle Beast be one great album ahead of Beast In Black with this one?

However, I must say I was caught a bit off guard by the album’s leading single, the title track, as it wasn’t at all what I had expected from this lot. I was also a bit disappointed. It’s not like they had abandoned their 80’s Hard Rock but this tune not only held a Symphonic Metal outlook, there’s also a big twist of dance hall/cabaret arrangements and a rhythm that flirts with Disco, very theatrical both in musical style and the video itself. The chorus also took a few spins to get used to as it didn’t stick immediately. Now, before this sounds like a slag-off, it’s really not as the tune is a grower and now I have come to like the track. Still, it seems like Battle Beast wants to break new ground here as the tune really don’t sound like the Battle Beast we’re used to at all and I’m not sure it’s the right way to go, especially as it’s the leading single. It’s a good song but the only thing that tells us it’s a Battle Beast tune is Noora Louhimo’s amazing voice.

But the album starts with “Unbroken”, a song that for starters brings on a Symphonic Metal vibe but soon continues as a Metal influenced Melodic Rock track that makes me think of late 80’s American Arena Rock with an AOR-smelling refrain. The classic Battle Beast sound is there at times but mostly not. It’s a good song but it doesn’t floor me. Second single “Eden” is an uptempo pop-metal tune that’s reminiscent of the Anette Olzon-fronted Nightwish. It’s obvious as a single-choice as the tune is catchier than catchy and it’s a great tune but again, it’s only Noora’s voice that tells us this is Battle Beast. “Unfairy Tales” starts out as a Bon Jovi “It’s My Life” rip-off, then the verses comes along with a big-scale “Livin’ On A Prayer” vibe only for the chorus to mix “Livin’ On A Prayer” with “You Give Love A Bad Name”. While I sure dig the song’s extreme catchiness, this is too much a Bon Jovi rip-off for comfort.

Latest single “Endless Summer” will definitely be a talker as it’s the song most outside the box on this album. The tune is an acoustic-guitar driven pop-song with big AOR overtones, smooth and slick and it screams mainstream radio-hit. Again, the classic Battle Beast is far, far away and I think of Robin Beck when I hear it. I also think of Roxette and Bryan Adams – and maybe even Belinda Carlisle’s solo stuff. Huh! I dunno, it’s a damn catchy piece and I’m a sucker for stuff like this so I dig it but it sounds so very out of place on a Battle Beast record. Very 80’s, very poppy and on an upbeat note, the more rocking, Metal-influenced stomper “The Hero” takes us back to the Battle Beast of old that we know and love. It’s a memorable tune with a really good refrain, so that one’s a winner. “Piece Of Me” is not a Skid Row cover but is aggressive enough to actually remind me some of Skid Row but with a more 80’s Sunset Strip vibe. Heavy riffing, a heavy rhythm, some sleaziness and Noora’s attitude-laden vocals brings the song home – good one.

It’s ballad time with the big and bombastic “I Wish”. It’s an overblown and cinematic piece, full of strings that sounds like a score for a James Bond movie. It’s dramatic and atmospheric with a melancholy and a romantic twist. It’s an ok song but somehow it never lifts when the chorus shows up. “Raise Your Fists” opens with synthesized strings which brings on a symphonic feel but there’s also a Celtic influence weaved in.  The tune heavies up and goes into Heavy Metal mode, still with symphonic vibe present and again, the Olzon-fronted Nightwish era comes to mind. It’s a bombastic tune with a big sound-scape but still very much in-your-face and a refrain that hits where it should – a really good tune. “The Golden Horde” is a fast Metal track where classic Heavy Metal and European Power Metal meets. It’s a melodic yet powerful and aggressive tune with lots of heaviness and a catchy chorus, however it’s a bit too much standard Power Metal over it for my taste. I’ll say it’s ok.

The closing track “World On Fire” is upbeat, punchy and straight-forward with a classic Battle Beast sounding refrain that sticks right off the bat. The verses are a bit more laid-back which creates a brilliant dynamic within the song. It holds a danceable rhythm, it’s energetic, heavy and very catchy. A great closing track. If you want more and want to go for the deluxe edition, you’ll get two bonus tracks as well. “Bent And Broken” is a Metal ballad, punchy yet soft with a soothing arrangement, smooth melodies and a catchy yet not poppy refrain. It’s still heavy enough to not be cheesy and it’s also very atmospheric – very good. “My Last Dream” comes with verses that’s standard, random sleazy Hard Rock with one foot in the late 80’s – punchy, kicking and rowdy. Still rough and ballsy, the refrain takes a turn into U.S. Arena Rock from the same decade but with a Metal touch. It’s an ok track but not too much to make a fuss about.

Ok. So what happened here? This doesn’t sound like the Battle Beast we all know and love. The band has had a change of style here – and it’s not for the better. Gone is their 80’s Melodic Hard Rock meets Metal, their pure 80’s chart-pop and their aggressive yet melodic Metal with big choruses and sing-along melodies. But most of all, their identity is totally lost here – only Noora’s voice tells us that is Battle Beast. If it wasn’t for her, this could be any melodic Hard Rock act out there – and that’s a big shame. Will this new style gain new fans? Maybe but it’s more likely they’ll lose the old ones. I’m not gonna say that this is a bad album because it’s not. Even though there are a few fillers too many here, the band knows how to write a good rocker, they know how to hammer out a catchy refrain that sticks so I definitely think it’s a good record. But this sounds like a totally different band and when I listen to Battle Beast, I want it sound like Battle Beast. Back to the roots next time, please.