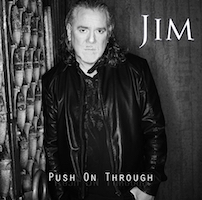 If you live outside of Sweden – even in our neighbor countries such as Norway, Denmark and Finland – there’s a pretty large chance that you don’t have a clue who Jim Jidhed is. My guess is that you must have a really great interest in melodic rock and AOR to know who this guy is. In Sweden, on the other hand, I think that more than the usual rocker knows at least something about him. Jim Jidhed became famous in the late 80’s as the frontman and lead singer in Swedish AOR rockers Alien. In 1988 the had a really big hit with a cover of the old Marbles track “Only One Woman”. The song was written by Barry, Maurice and Robin Gibb and the Marbles – a duo featuring future Rainbow, MSG and Alcatrazz vocalist Graham Bonnet – and was their only hit, something that would also apply on Alien. Jidhed left the band after their self titled debut album was released in 1988 and while Alien carried on, Jidhed released several solo albums, with both Swedish and English lyrics and he also participated in the Swedish Eurovision Song Contest in 1991, where he came at third place with a song called “Kommer Du Ihåg Mig” (Do You Remember Me). In 2005, Jidhed reunited with Alien and released the album Dark Eyes, but the only original members on the record were Jidhed and guitarist Tony Borg. But in 2010, the original Alien line-up reunited and in 2014 came the second album featuring the original band, called Eternity.

Now, I was never a big Alien fan, even back in the day. I own their debut album (and the brilliant follow-up Shiftin’ Gear (1990) featuring singer Pete Sandberg) and it contains some good songs but I have never managed to get into the songs for some reason. Dark Eyes was an underwhelming as well so I can’t say I had very high expectations on Eternity either. Much to my surprise, Eternity turned out to be a real killer, full of catchy melodies and so many hooks they could have been millionaires if they could sell them. Jidhed’s voice had grown as well and had become more raspy and deeper than before. But instead of a follow-up to that album, we get a new solo release from Jidhed and once again, I really had no expectations as Jidhed’s solo career have passed me by. To help out with song writing and production duties, Jim brought in Daniel Flores (he’s also the drummer), famous for his work with The Murder Of My Sweet, Find Me, First Signal and others, which bodes well. Also, his bass playing buddy from Alien, Ken Sandin (also in the Kee Marcello Band) and guitarist Michael Palace (Palace) came in and offered their services for the album.

Opener “Glorious” serves well as an opening track. It’s a guitar laden AOR rocker that holds influences from both 70’s rock and 80’s dito – and the mix marries real well. Jidhed’s voice is in fine shape and I think his “new” raspier voice suits the rougher kind of AOR really well – a very good track. The following title track is also a true winner. With a big chorus and catchiness deluxe, it comes very close to the sound of the latest Alien album which is a mighty good thing. Thumbs up for this one – many thumbs! First single “If We Call It Love” comes in a late 80’s melodic rock / AOR style, big on the synth and a catchy refrain – if it was 1988, this could definitely have been a hit. The song is ok, but it’s not a WOW! moment for me. The following ballad “Waiting For Summer” is taken right out 1987 and while it is ok, it’s a bit too syrupy and mainstream for my taste and even though it has a pretty catchy chorus, I can’t get it to stick. The same thing applies to “The First Time”, an 80’s sounding AOR half-ballad, but the difference is that this catchy pop pearl sticks right off the bat and feels more alive and kicking. “One Breath” is AOR at its best – poppy, pink, fluffy and with a refrain that don’t take no prisoners – killer stuff.

If today was 1988 and the big power ballad “Too Many Words” had been played even once on MTV, the song would have gone into heavy rotation in no time. I’m a sucker for this kind of ballad – if it is well-written which this is – and it makes me long for 1988 again. “Next In Line” is a mid-paced AOR tune that doesn’t move me at all. While not bad per se, it goes in one ear and out the other. “Drowning” is slower and walks the same path as Whitesnake’s “Is This Love” or “The Deeper The Love”. As a Whitesnake-fan, none of those songs are any favorites of mine and the same goes for this track – it’s good without creating any emotional sparks for me. “Love Was Waitin'” is a musical time machine that takes me back to 1986. The song has a big pop fell on a rocking foundation, the AOR way. I like it, but there is something in the chorus that is missing, something that makes the song lift properly. Closing track “It Is What It Is” is a caressing, soft, acoustic guitar based ballad full of synth strings and a big bombastic sound. Jidhed makes the album’s best vocal performance here – passionate and heartfelt. I usually doesn’t like it when an album ends with a ballad, but this is an exception to the rule, the album closes in the best possible way.

To sum it up, this is album that will probably please Alien fans – and big AOR fans in general – and yes, I think that Jidhed and Flores have created a good album. In my book, there are a few fillers too many and sound-wise, it’s actually a bit dated. Even though I like my AOR to sound like AOR should with big choruses, lots of keyboards and a clean, smooth and silky sound, at the same time, I believe that a rougher, more guitar oriented and heavier sound is always beneficial to this genre – AOR do have a tendency to become too cheesy and saccharine. But there are enough great songs here to please fans of melodic rock and AOR and Jidhed’s voice is still one of the best in the genre – the fact that he has aged so well vocally with a new-found raspiness and depth is actually quite thrilling and impressing. Mind you, the guy have been singing for all of his life and he turns 54 this year so that fact that he has kept his voice intact is impressing when many of his peers haven’t. The seven might be somewhat thin here, but if this is your kind of music, I’d recommend you to at least check this album out.