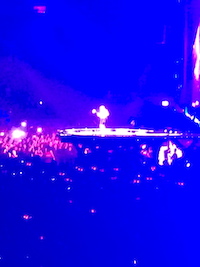 A lot of things has happened since AC/DC’s last tour – the one that started with the release of their last album Black Ice in 2008. Back then, the line-up was intact even though there were always some legal (read: drugs) situations with problem child (pun intended) drummer Phil Rudd, who now and again had been busted with the possession of marijuana. But things change and the first thing that infected the band was that original member, rhythm guitarist, main songwriter and band leader Malcolm Young was reported ill and later it turned out that he suffered from dementia and even though his songs were used for the latest album Rock Or Bust, he didn’t play on it and, it turned out, he would never play with the band again. Next up, bad boy Rudd were busted for meth possession and attempt to murder. The latter accusation was later dropped but this was enough for his second sacking from the band, the first was back in 1983. That meant that for the tour no less than two new members were being inducted to AC/DC’s line-up. First in was Angus’ and Malcolm’s nephew Stevie Young, a guy who was a stand in for Malcolm back in 1988 when Malcolm had to seek help for his drinking problems. Stevie also plays on the new record and is now a permanent band member. Rudd’s place was filled by one Chris Slade who was in the band back in 1990 for five years before Rudd returned to the band. Despite of all AC/DC’s internal problems, the new album showed a band that sounded more fresh and vital than in many, many years. To me, their new album is their best effort since the underrated Flick Of The Switch back in 1983. But still, there is no denying that after all the shit that has happened to them, their new tour feels like their farewell tour, even though none of the members have said anything about the matter. It’s just a hunch, but a hunch that I have heard lots and lots of people has had and I’m pretty sure many bought a ticket for this tour to say goodbye, like this would be the last time we would get to see this fantastic rock band live. 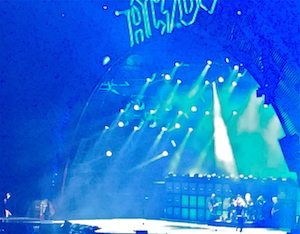 AC/DC’s stage is huge, as always and this little rhythm & blues boogie-woogie rock band from Australia is now – and has been for numerous of years – a huge arena rock band, playing to the same amount of people as Rolling Stones, U2 and Madonna does. This evening, the concert was sold out – 53 600 seats – but AC/DC could have sold many, many more tickets – if they had found a bigger arena to play in. The whole gig started with a movie on the big screens, that showed the moon landing and the whole “this is a big step…” thing were done, of course finishing with the AC/DC logo type burning on the moon with the finishing words “…for AC/DC!”. A really, really cool intro and more entertaining than the train intro from the last tour. The band opened up with the new album’s title track, “Rock Or Bust” and it was a big surprise how well it was received – it almost felt like one of the classics. That said, the new AC/DC record has songs that soundwise feels a lot like their early 80’s sound and even late 70’s. But it is second song “Shoot To Thrill” (Back In Black, 1980) that really kicks the show into action. Angus is his usual wild self in his school boy uniform, but the band sounds really vital and you instantly got the feeling that they were having a blast. “Hell Ain’t A Bad Place To Be” (Let There Be Rock, 1977) is always a pleasure to hear live and the band – especially singer Brian Johnson – sounds very fired up. “Back In Black” is next – very early in the set for a huge classic like that – and the whole place explodes. That riff, man. That riff!. New song and the first single off the new album, “Play Ball”, follows and even though it doesn’t go down as well as “Back In Black”, it still has the crowd moving. “Dirty Deeds Done Dirt Cheap” from the 1976 album with the same name kicks major ass and when almost 54 000 people sings the chorus back to the band, it’s goosebumps-time! The fact that 1990’s The Razor’s Edge isn’t one of AC/DC’s strongest effort makes it even cooler that “Thunderstruck” is one of their most popular tracks and live it’s always a monster. This evening is no exception and the song totally explodes. And when the band bursts into the oh so underrated “High Voltage” there is no doubt that AC/DC has won. Chris Slade might be no Phil Rudd, but I really can’t find a better replacement. Maybe Simon Wright would be, but Slade fits perfectly in the band – he sure knows how to groove. “Rock And Roll Train” is easily the best track off Black Ice (2008) and it worked perfectly as the opener on the last tour, but tonight the tune doesn’t come across right. It feels a bit stale and the chorus – that killer chorus – never lifts, for some reason. Too bad on such a good song. But “Hells Bells” (Back In Black) is the perfect cure. The second the big black bell shows there’s a roar from the crowd and the song just kills! “Baptism By Fire” from the new record is a real stomper on record but live it falls flat. This is the only song this night where it feels like no one has a clue of which song they’re playing, but “You Shook Me All Night Long” get everything back on its feet and the fact that the song is huge hit shows – now everybody is on their feet and I’m starting to wonder when the roof on Friends Arena will pop. Another oldie brought back to life is “Sin City” (Powerage, 1978) and it’s impossible not to tag along to the crazy rhythm, but on the other hand, it’s really weird every time I hear this song and it’s not Bon Scott singing. It do works well anyway. “Shot Down In Flames” (Highway To Hell, 1979) is one of AC/DC’s more obscure songs, but it’s an awesome song so it’s a joy every time they bring it into their live set and this night is no exception – brilliant! Back In Black‘s “Have A Drink On Me” is one of those songs that I probably wouldn’t have missed had they not played it, but I enjoy the song like Hell and “T.N.T.” (High Voltage, 1976), well, it’s one the best songs AC/DC have ever written and when the opening riff breaks out and first  “Oi! Oi! Oi!” cuts loose, the place goes totally nuts – what a song! “Whole Lotta Rosie” (Let There Be Rock) is a must, of course, and they have been playing it for ages so they probably don’t even have to rehearse it. But, this time, Malcolm’s gone and this song is Malcolm’s rhythms so would Stevie nail it? Yes, he did. The tune grooved like crazy and was a highlight this evening. One of my all time AC/DC favourites is “Let There Be Rock” and even though this is very much Bon Scott’s baby – it always feel a bit weird listening to this with Brian’s voice instead – but Brian Johnson really makes the song his. The only downside is that they let Angus play a long, long, long guitar solo in the middle of it – I manage to both visit the men’s room and buy a new beer before it had ended. When the band comes back to finish off the tune, it turns out that song was the last one. Weird. But there was an encore to come, of course! 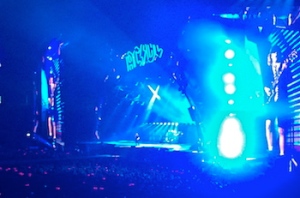 The encore is the most predictable part of the show and as always “Highway To Hell” is the opener. I have no problem with predictable when it comes to this part – I mean, that riff is monumental, it’s huge and it kicks so much ass it’s almost ridiculous. Do I need to point out that the whole damn arena exploded? Well, it did. And as always end the show with “For Those About To Rock (We Salute You)”. The song is a total powerhouse and one of the heaviest pieces of rock and roll ever. The salute canons in the end are deafening and I’m wondering what the “decibel police” have to say about them. See, in Sweden the volume can’t exceed 100 decibel and I’m sure those canons were way past that. In fact, I think the over all sound did exceed that number. I really, really hope so. That stupid decibel-law is meant for breaking! Stevie Young then? Well, the guy is a rock, I must say and if you closed your eyes, you really couldn’t hear any difference. I guess, there’s something in the water in the Young households. But I must admit, it looked really weird to not see Malcolm on stage. Stevie also looks very AC/DC and it’s not like he’s a teenager either so he fits really well in the band visually as well. As for this being their farewell tour, I saw no indications about that at all. Quite the contrary, to be honest. It might sound tough and mean, but without all the crap Phil Rudd has been bringing to the band and the addition with a healthy new guitar player that is also from the Young-clan, AC/DC felt and sounded more vital and sparking than in many years and the feeling I got was that this is a band that had to prove themselves again and that they enjoyed the hell out of that. Hopefully, AC/DC has at least one more album and tour in them before the farewell tour takes place. Maybe what we saw this night was a new beginning? Let’s keep our fingers crossed for that one.