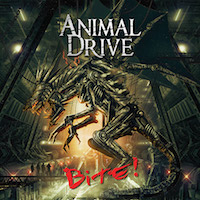 This is the first time I review an album by a band from Zagreb, Croatia. In fact, Animal Drive is the first Croatian band I have ever heard or even known about. At least, I think so. That alone made me interested to check this album out. The press release also gave some hints that this band just might be something to write home about. The band was introduced to the Frontiers label by none other than Jeff Scott Soto (Sons Of Apollo, Talisman, WET, Yngwie Malmsteen, Journey) who got to know the band’s lead singer Dino Jelusic when they sang together in Trans Siberian Orchestra and as we all know, Paul O’Neill would never let any singer in if he couldn’t deliver the goods. That meant that I could look forward to a singer who knew his bits and also, the band lists their influences as Slave To The Grind (1991) era Skid Row, Whitesnake at their heaviest but also some more progressive acts such as Dream Theater and to me, that sounded like a real treat

Opener “Goddamn Marathon” really kept the promises of the press release. It opens hard and tough with a brutal rhythm and some fat riffing. Heavy and in a slower pace in the verses the tune speeds up when the chorus enters and the tune lands somewhere between classic Hard Rock and Metal and yes, the progressive side shows up here as well. It also sports a slight modern touch but not enough to label it modern Metal at all. A damn great tune that made me think Animal Drive just might have a winner on their hands. First single “Tower Of Lies (I Walk Alone)” follows and the tune is Melodic Hard Rock as a base but with an added Metal arrangement and some half-thrashy riffing and a heavy rhythm. The chorus is very catchy, though and the choice as a single feels pretty obvious. With a little luck, this song could be a hit on rock radio. Single # 3, “Had Enough”, follows and it is an even more obvious single choice. It’s a straight forward Hard Rock tune that brings thoughts back to early 90’s Arena Rock with a slight Metal vibe added. It’s catchy and all but I find it a bit too mainstream. An ok song, though.

“Hands Of Time” takes us to power ballad land and the late 80’s / early 90’s loudly ay hello. The band’s Heavy Metal influences makes themselves reminded here and there but the fact that the guys knows their power ballads is a fact – and they do it real well. This should be a single at some point because I smell a hit here – a great tune. “Lights Of The Damned” is a tough Heavy Metal tune with a catchy melody that crosses over to Power Metal some and I come to think of The Ferrymen here, much because of the similarities between Jelusic’s voice and Ronnie Romero’s. However, the song fails to grab me and even though it’s not a crap song, it’s easily forgotten. The same can be said of second single “Time Machine”, a regular Metal track that goes on and on without making any fuss what so ever. Only the soft and atmospheric ending is anything to write home about here. Why this tune was chosen a single is beyond me. Disappointing.

The second ballad “Father” is a killer though. Dark, emotional and touching, the tune comes across as very real and honest and the brilliant melodies and arrangements only adds to the song’s greatness. “Fade Away” is pure Arena Rock – uptempo, poppy and with a very catchy and radio-friendly chorus. It’s a pretty good song but for some reason the tune feels somewhat manufactured and written exclusively with radio in mind. “Carry On” is another ballad – big and powerful with a punch and a really strong refrain. Clearly single material. “Devil Took My Beer Again” is a 70’s influenced rocker that has Led Zeppelin to thank for a lot but there’s also a progressive thread throughout the song. Groovy and kicking, it’s a damn good song despite the ridiculous lyrics. Closer “Deliever Me” comes with a synth intro but it turns into a mid-paced heavy rocker where the verses are softer but the chorus hits hard. It contains a killer arrangement, a strong main melody and a very memorable chorus which makes the tune one of the stronger moments on the album.

What we have here is a bunch of really good musicians and an incredible singer that mixes David Coverdale, Jorn, Russell Allen (Symphony X) and lots of Mats Levén and even Jakob Samuel (The Poodles) at times, a singer that’s a future star and it’s not hard to get why Paul O’Neill chose him to sing with his TSO. The guys also proves that they’re capable of writing really good tunes. But on the down-side, the great songs are too few and the filler quota is too large which makes the quality here a bit too uneven for comfort. I’m also not that big on the production here. Not that the album sound like a demo or something, it’s more that it sounds too produced. It sounds stale, clinical, compressed and the drums sounds so trigged that sometimes I get a machine vibe, all of which takes away the sonic dynamics. This album would have benefited a lot had it sounded more alive, breathing and air-y. But there’s a lot of potential here and I wouldn’t be surprised if the next album turns out to be a real knock-out. I get the feel they have that album in them.