As a somewhat new acquaintance for me, this was the first time I have seen the band live. This new updated version of the band – three new members – has only been around for a year or so, so I was interested in seeing just how tight a unit they were. I have checked out the band’s two albums Revolution (2015) and Liberation (2017) quite recently and their brand of Melodic Rock, not very unlike the stuff that H.E.A.T. plays, have been to my liking and I had a feeling that this kind of music would work really well from the stage. However, the band started playing at 6 o’clock in the evening, a time when many people are still at work on a Friday so it wasn’t the biggest crowd in the world that met the band. But the band – original members, singer Alexander Strandell and guitarist Johan Gustavsson with newies Sam Söderlindh (guitar, also in Adrenaline Rush), Richard Swärd (bass) and drummer Linus Thomsson – didn’t give a rat about that and gave the gig one hundred percent. And they sounded good. Damn good! Strandell turned out to be a great frontman with a really good voice (albeit the treble sometimes ran amok in his higher register) and the rest of the guys are all stellar musicians – and they were really, really tight. Just as I expected, their music was just right in a live environment and I felt sorry for the guys that more people hadn’t turned up. With a large crowd, Art Nation have all the potential in the world to create a damn fine rock party. Very well done, boys. I see a bright future here. 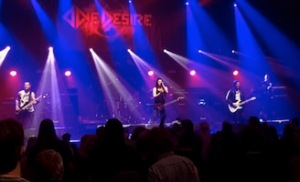 This Finish AOR / Melodic Rock outfit that rose from the ashes of Sturm Und Drang created quite a stir about a year or so ago when their debut single “Hurt” found its way all over Rock radio here in Sweden. It was a no-brainer that I had to check out the band’s self-titled debut album that came out in 2017 and it was truly a great album, the way I see it it’s a must for lovers of this kind of music. But to make a great record is one thing, it’s something else to make the songs deliver from the stage as well. Well, the guys seem to have rehearsed a great deal – I have no clue how much the band have played live – but they sounded really, really tight. Again, the crowd wasn’t that much bigger than the one Art Nation played to and again, that’s a crying shame because in my head I could see a big crowd going bananas when they kicked off the show with their hit song “Hurt”. In between that one and closing track “Buried Alive” they played a whole bunch of songs from the album like “Apologize”, “Whenever I’m Dreaming” and “Love Injection”. Lead singer André Linman showed proof that he have a brilliant voice when he sang the ballad “Falling Apart” with only a piano to back him up. Why they opened up with “Hurt” is something I can’t put my head around, though, as the tune is the perfect closer. Closing track, the band’s most Metal-like tune “Buried Alive” should have opened the show instead. Other than that, One Desire was brilliant and a band that have big potential making it big.

When I first saw that this duo had been booked to the festival, I thought that we would witness their debut gig as a band. However, they were only booked to play an acoustic gig at the VIP area and even though I know that both Mats Levén (Candlemass) and Anders Wikström (Treat) are killer musicians and singers, I was slightly disappointed. But hey, knowing these two guys I knew that anything could happen at a sit-down acoustic gig so I still looked forward to that. I was a bit puzzled that the guys played so very little from their debut album and that the gig was made up mostly by covers. But their set was everything but predictable and boring, these guys really know how to entertain a crowd, both musically and their talk in-between songs. Lots of humour there. Their debut single “Sailing Stones” was played together with awesome versions of stuff like Alice Cooper’s “Only Women Bleed” (the guys’ vocals on that tune were totally stunning!), Saxon’s “Princess Of The Night”, The Doors’ “People Are Strange”, Temple Of The Dog’s “Hunger Strike” (again, those vocals – every hair on my body was on the rise!), Goo Goo Dolls’ “Iris” and U2’s “I Will Follow” and I must say, they all sounded awesome. As the guys played more or less the same sets both days and they were just as good, I won’t review the day-2 gig. But how good this was, I would have loved some more ReVertigo tracks and why not a song or two from the only Levén fronted Treat album from 1992. Some guy from the crowd requested “Hollywood Dreams” by Levén’s late 80’s Sleaze Rock band Swedish Erotica. That would have been so much fun but it’s understandable that it wasn’t played. Hopefully we’ll get to watch a real band gig by ReVertigo soon because it’s a bloody good album!

To bring in H.E.A.T. as the replacement for Joe Lynn Turner feels like the most obvious thing in the world to do. In fact, I think it’s a bit of a mystery that they weren’t booked from go in the first place. See, I believe that in 2018, H.E.A.T. is a bigger draw than Turner – that’s said without taking away anything from Turner. The guy is without any doubt a magnificent singer and responsible for some mega classics and I would have loved to see him in action, but I think that H.E.A.T. pulls a bigger audience. All of us who have seen H.E.A.T. live knows that they are an amazing live act and it’s impossible not to be entertained by this lot. I have seen the band plenty of times now and I always get impressed by them so I always look forward to their gigs. This is the first tour since Eric Rivers (guitar) left the band and the first ever with returning guitarist Dave Dalone as the sole guitarist. Dalone is a pro, of course, and he pulled it off like a charm. The guy is obviously very talented and he impressed me a lot, both as a musician and as a performer. Singer Erik Grönwall still roams the stage like the Roadrunner on an ADHD high – a brilliant singer and a world-class entertainer.

But that’s not all – H.E.A.T. also has the material to go with that. All three of their Grönwall fronted records are nothing but fantastic Melodic Rock albums without any weak moments at all that works just as well in front of the stereo as on a stage. The band kicks off with the Hard Rock monster “Bastard Of Society” and from that moment to the closing brilliance of “A Shot Of Redemption”, H.E.A.T. makes sure we all get entertained like there was no tomorrow. New songs that fell pretty far out of the box musically on their latest album like “Redefined” and “Time On Our Side” – the latter have grown shitloads on me lately – works a lot better live than I thought they would. In fact, “Redefined” is a highlight of their show. I can’t say anything more than that I was once again blown away by this fuel-injected shot of energy that they are live and that everything they did – yes even Crash’s drum solo – was entertaining. Something that made me even more sure that H.E.A.T. should have headlined this festival. After this explosion, I felt sorry for headliners Slaughter that had to go on after H.E.A.T. How could they possibly top this?

Album reviews:
Freedom Rock
Address The Nation
Tearing Down The Walls
Live In London
Into The Great Unknown

Going on after the discharge that was H.E.A.T.’s gig isn’t the easiest task on Earth. H.E.A.T. is doubtless one of the best live acts I have ever laid my eyes on so you have to be something over the top to even break even with that. The good news is that H.E.A.T. pulled the biggest crowd of the day, even though it still wasn’t an enormous crowd by any means, and hopefully they all would stay on for Slaughter’s gig. The bad news was that they didn’t. In fact, the crowd got smaller and smaller as Slaughter’s gig went on, something I don’t understand. Why leave when you have paid a good buck for a ticket? But the good news for us was that the band didn’t give a flying fuck about that. High-pitched singer Mark Slaughter – yes he still got the voice intact – was all smiles and was determined that we who stayed on had a blast. Bass player and Mark’s partner in crime since day one, Dana Strum, was going off like he played in front of a full-house arena, underrated guitar player Jeff Blando gave us his best licks and drummer Zoltan Chaney is a complete nuthouse. I have never seen a drummer go off like him, playing with his hands, feet, jumping around and throwing his sticks around. Fact is, the guy actually stole the show. So all props to Slaughter for being true professionals – and they actually looked like they were having a damn good time.

From the opener “The Wild Life” to closer “Up All Night”, the band put on a high energetic show that really couldn’t have left any fan disappointed. The songs were all taken from their two first albums Stick It To Ya (1990) – “Burning Bridges”, “Spend My Life”, “Mad About You”, “Eye To Eye”, “Fly To The Angels” and “Up All Night” – and The Wild Life (1992) – the title track, “Days Gone By” and “Real Love”, except for “Take Me Away” from their last album Back To Reality (1999). As a Slaughter fan, I was really happy to see them live for the first time ever – I missed them at Sweden Rock for some reason – but the fact is, Slaughter aren’t a headliner. Not because they don’t have the skills – they do – but they were never that big in Sweden at all which probably explains the low audience attendance. I think Slaughter were good but they weren’t even close to match the H.E.A.T. explosion. That said, I’d go see them again anytime.