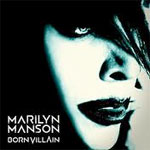 No matter if you love him, hate him or just don’t give a shit, Marilyn Manson doesn’t need any introduction. The shock rocker who once took a good hard look at Alice Cooper, stole his concept and then made it 10 times worse, is someone you know about even if you’re 70 years old and never heard a note of his.

When he started out, he lent a huge helping hand from Trent Reznor (Nine Inch Nails) and became a world wide celebrity with his successful album Antichrist Superstar, that mixed Alice Cooper and W.A.S.P. with both goth and industrial music and had a big hit with a cover of The Eurythmics ”Sweet Dreams”. But as the true chameleon he his, his style had changed already with its follow up Mechanical Animals, where he went all 70’s glam on us, hailing Bowie and Bolan as the true heroes of rock, of course without giving in on his industrial influences.

In my book, Manson was on top when he teamed up with former Shotgun Messiah bassist / singer Tim Skold for the mind blowing The Golden Age Of Grotesque from 2003. Since then, Manson has been slipping hard and his records haven’t even come close to his prime days. If it has to do with him being jaded or if his cocaine addiction has taken it’s toll, I don’t know. His last albums Eat Me, Drink Me and The High End Of Low were more or less disastrous, both musically and sales wise which made this album crucial to his career.

Luckily enough, for him, he have shaped up and made an album that sounds more fresh and alive than he has in many a year. But that’s not to say that he has given us some kind of masterpiece here, because this is an uneven give, where he still can come up with the goods in songs like the The Golden Age Of Grotesque sounding ”No Reflection”, the killer chorus vs. weird verses in ”Pistol Whipped”, the groovy and catchy, yet Manson-y ”Slo-Mo-Tion”, the most brilliant ”The Gardener” with its almost AOR-ish chorus and the groovy and classic Manson sounding title track, he also has a tendency to create fillers and and the oh so predictable ”Murderers Are Getting Prettier Every Day”. He also feels a bit tired at times.
As mentioned, Manson has a thing for doing covers, the Eurythmics one not being the only one. He has also covered Depeche Mode’s ”Personal Jesus” and ”Tainted Love”, which were made famous by Soft Cell in the early 80’s, orginaly written by Ed Cobb and performed by Gloria Jones. This time he has made a cover of ”You’re So Vain” by Carly Simon, also covered by both Bananarama and Faster Pussycat. And I must say he made a great cover here and Mansoned it well.

If this come back has anything to do with him reuniting with original bassist and songwriter Twiggy Ramirez is impossible to say and if this is the first step on The Manson Camp’s way back to the top is to early to speculate in, but no matter what, he has created a good album that has all the classic Manson elements and even if this is not 100%, it sure is a very good re-start.