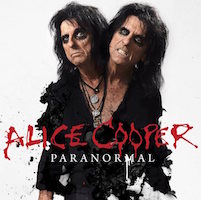 When I was a kid growing up in the 70’s, I loved only two bands – Kiss and Sweet. I had no older siblings that could steer me in any musical direction and at school, Sweet and Kiss were the only rock bands my friends talked about so I pretty much missed out on anything else. In Sweden we had had a magazine called Poster which had some articles in it but were mostly made so that us kids could spray our walls with big color posters of our favorite bands and both Sweet and Kiss were heavily featured there. But I also remembered that Alice Cooper were featured quite a lot. I also remember thinking that this guy with all the snakes and shit was a freak – and why the Hell would any dude be calling himself Alice? A girl’s name! Well, I had never heard a note from Alice and none of my friends either apparently – so I didn’t give a crap. It would take me all the way to 1986 when Alice made his come back with the album Constrictor for me to give him a go. Well, I loved that album and around the release of that album, an old friend from school came back into my life and well, he was an Alice Cooper fan so one day I went over to his house and got some tapes of Alice’s 70’s and I became a Alice Cooper fan right there and then – and I cursed myself for not having checked his stuff out as a kid.

Well, today, everybody and their mother knows of Alice Cooper and I’m sure everyone has at least heard one of his songs one time or another. Alice has gone through a lot of musical genres since his days in the 70’s. He went heavy metal in the mid eighties, he went pop metal in the early 90’s, he went dark and industrial in the early 2000’s and he went garage rock in the mid 2000’s and all those changes has given Alice the chance to make new fans in a lot of different musical genres in rock. It has also split his fan base quite the lot, some people loves this and hates that and so on but everyone that attends an Alice show will get at least some of their fave stuff, which I think is pretty cool. Now, I don’t wanna call Alice a band-wagon jumper but he sure did change with the times, taking in the stuff that was cool at the time – but he never ever lost his Alice edge no matter what genre he played – that should be respected! Well, back in 2011, Alice brought back his former partner in crime, producer Bob Ezrin (Kiss, Pink Floyd, Deep Purple) and recorded a sequel to his mega hit album Welcome To My Nightmare (1975), called Welcome 2 My Nightmare. While that album got some mixed reviews among his fans, it did show Alice going back to his 70’s roots, something many fans had wished for for ages. I loved the album and therefore I was pleased to hear that Ezrin was onboard this time as well and not only that, his old partners, guitarists Michael Bruce and Steve Hunter, bassist Dennis Dunaway and drummer Neal Smith were also involved. Yes, this sure was an album to look forward to. And now it’s here!

The opening title track is a classic rocker with a beat that even has a touch of disco in it. It is also a bit symphonic and at times I’m thinking of Trans-Siberian Orchestra but with a classic Coop arrangement. With about 90 seconds to go, the song takes on an early 70’s Alice vibe before it ends like it started. A great tune and a perfect opener for a Coop record. Worth mentioning is also that Roger Glover (Deep Purple) has a writing credit and plays bass on the tune. “Dead Flies” is a shorty and a classic, raw hard rocker and a big nod back to the days of Love It To Death and Killer, both from 1971 where the influences from classic bands like Cream and Zeppelin are quite obvious – a garage rocker that kicks some major ass. “Fireball”, written by Coop and Dunaway, is a hard rocker with an almost psychedelic and spacey vibe. The raw Hammond, the crunchy guitars and the big groove brings vintage Alice to mind once more. Another winner.

First taster “Paranoiac Personality” is a brilliant, twisted rocker that takes us back to the Welcome To My Nightmare days – or even his underrated 1976 album Goes To Hell. It has the crooked beat, loony arrangements and grooves that is unmistakably Alice Cooper – a brilliant tune! Billy Gibbons of ZZ Top guests on “Fallen In Love”, a straight forward rocker that Gibbons gives a blues-rock swagger. In anyone else’s hands, this would be just another rocker but The Coop Alices it up with an arrangement that could only be Alice. Or maybe we should say Ezrins it up. It’s not a great song – it’s good but the weakest so far. “Dynamite Road” is harder and edgier with a classic Coop in-your-face hard rock drive and a kick-up-dust rhythm. Raunchy, muscular guitars, thunderous drums and a pumping bass with a classic Coop melody line on top makes this song one of the album’s finest moments. With a riff-happy, bad-ass groove and where both verse and chorus goes arena rock catchy, “Private Public Breakdown” bids us the first really radio-friendly melody on the record – and the tune sure benefits from it. The way Coop and Ezrin arranged it makes it almost `hitty´, but in Cooper’s own way, of course. Very good indeed.

Alice stretches even further with “Holy Water”. Horns and a dance-hall like groove combined with classic rock makes me think of the days of Billion Dollar Babies (1973) and Welcome To My Nightmare. It’s a swinging stomper that screams vintage Alice a long way. That said, it wouldn’t have felt wrong on Welcome 2 My Nightmare either. Another favorite here is “Rats”, a kick-ass classic rocker, fueled with attitude and it grooves like crazy. It’s simple and straight forward and the plain chorus where Alice chants “give the rats what they want” is super effective and ballsy – a brilliant track. Closing track “The Sound Of A” is a reworked tune from the earliest 70’s, written by Cooper and Dunaway, that wouldn’t have screwed up on an album like Love It To Death. It’s dark, floating, spacey and the melodies reeks of classic Alice spookiness. What a way to close a really good album – with one of the album’s finest tracks.

Then there’s the bonus disc for the deluxe edition. It starts with two tracks that features the reunion with Alice’s old band, minus Glen Buxton who passed away in 1997. First up is “Genuine American Girl” (co-written with Neal Smith) is a simple, old-time surf-rocker with its feet in 50’s rock and yes, it really sounds vintage. It’s very memorable and sounds like classic Coop all the way. Then there’s “You And All Your friends” (co-written with Dunaway) that sounds like a mix of old 70’s Love It To Death and late 70’s From The Inside (1978) Alice. It is groovy, stripped and very much straight forward rock with a good dose of pop on top. I really dig both songs. The rest is live versions of old classics and apart from “Feed My Frankenstein” (Hey Stoopid, 1991) it’s a very predictable and – quite frankly – boring list of songs, so for me, those are being put in the take it or leave it file. But the reunion songs are worth the extra green.

Just like almost every album that Alice have released in the last 15 years or so, I’m sure this one will get a lot mixed reviews from fans, but I’m a fan who really digs this album. The fact that Alice is moving more and more back to his roots is something I really appreciate as well, something he started doing already back in 2008 with Along Came A Spider, a record I actually like even though it’s somewhat uneven. But something that is kind of bugging me is why Alice don’t use his band when he’s recording? Apart from Tommy Henriksen, everyone else was excluded here. I mean, that band is really good so why hire studio musicians? Well, the musicians here does an amazing job. Swedish guitar hero Tommy Denander is credited as a co-writer and a player and he does a brilliant job as both and U2 drummer Larry Mullen fits in surprisingly well. But still, Nita Strauss, Ryan Roxie, Chuck Garric and Glen Sobel all deserves to play on this album as well. Well, be that as it may, The Coop has provided us with a great sounding album here and by the age of 69, the guy seems to have no plans to slow down. Let’s hope that’s the case for many years to come.

1. Genuine American Girl
2. You And All Of Your Friends