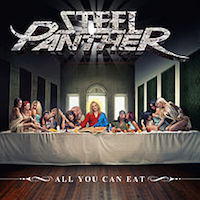 How much further can Steel Panther take their musical piss take? I mean, their debut album Feel The Steel (2009) was funny as hell and had all the right ingredients for this kind of spectacle. It didn’t hurt that the songs were really good and the band are all brilliant musicians either. Lead vocalist Michael Starr (Ralph Saenz) was once the lead singer in Van Halen tribute act Atomic Punks and for a while one of L.A. Guns million singers and guitarist Sachtel (Russ Parrish) played in Rob Halford’s Fight. Steel Panther started out as the cover band Metal Skool who covered melodic hard rock and AOR songs from the eighties and early nineties. They changed their name to Steel Panther when it was time for them to write their own material. Well, they stole most of it, to be honest, and re-wrote the songs.And it wasn’t that difficult to figure out which songs that laid ground for their own stuff. Live, these guys are hilarious. They’re like a heavy metal stand up comedy show. The success of their debut led, of course, to a follow-up – and we all know how hard it can be for a band to follow up a really successful album. Usually, the follow up doesn’t either sell as well and, to be honest, isn’t as good. Only a few bands have delivered the good twice is a row – Bon Jovi, Def Leppard, Van Halen and Skid Row are a few I can think of. In Steel Panther’s case, the mission was almost impossible, because how do you follow up a thing like this without repeating yourself, but still maintain the very thing that made you popular in the first place? Not an easy task and Steel Panther had painted themselves into a corner. Balls Out came out in 2011 and it couldn’t match either the quality or the success of the debut. Sure, the sex & drugs & rock ‘n’ roll lyrics were still there, but this time it didn’t feel like they came naturally, they felt contrived. Also, even though the songs were good, they had removed one of the things that was so great with the debut – the theft. Yes, the fact Steel Panther shamelessly stole everything on the first album from bands like Bon Jovi, Yngwie Malmsteen, Poison and Whitesnake was one of things that made their debut so funny and great. When the band just wrote their own stuff from scratch, they just sounded like any other band that wanted to revive 1991 – even if the song were good. Sure, there was a few Van Halen, Warrant and Def Leppard thefts, but it really should have been more. That said, I think that album had to swallow too much crap from fans around the world. The album isn’t bad at all – it’s a good album, just not AS good.

The band has always been berated for being a joke or a piss take. but I believe a band like this is really invigorating and I was really looking forward to the Panther’s third album. The first single “Party Like Tomorrow Is The End Of The World” was accompanied with a funny video, although a not very unexpected one. The song is a very funny, catchy and typical Steel Panther sex, drugs & rock ‘n’ roll humor kind of tune and the video goes hand in hand with the lyrics. To me, this song sounded like Steel Panther were back to do what they does best – just let loose and be stupid – and I mean that in a good way. The album opens with “Pussywhipped”, a hard and fast metal track, the way they usually opens their albums. This song must be a boot to Yngwie Malmsteen, both lyrically and musically. They did a Yngwie pisstake on their debut called “Asian Hooker” and this one is equally as funny. “Gloryhole” is a great rocker and lyrically, well, the title says it all. You don’t need much – if any – imagination to figure this one out. “Bukakke Tears” is a ballad where they have Whitesnake’s “Is This Love” as the foundation and lyrically it’s really funny. These guys really knows how to write a love ballad. “Gangbang At The Old Folk’s Home” is just brilliant and I laughed my guts out to this one. A really catchy rocker with a guest solo from Vivian Campbell (Def Leppard). “Ten Strikes, You’re Out” might not have made me laugh as hard as the other songs but this is a really good song. It has this southern boogie groove and I actually think of ZZ Top when I hear it. “Fucking My Heart In The Ass” is just brilliant, the lyrics are very funny – and smart – and the song is really groovy. Haha, so this is how it feels to be heartbroken for real? “You’re Beautiful When You Don’t Talk” is another one of those humorous womanizing Steel Panther songs. It’s a great pop metal song with single potential. You don’t have to be rocket scientist to figure out the lyrical meaning to “If I was King”, it’s not hard at all, but the song is a really good hard rocker. The album ends with “She’s On The Rag” and even though this song is a really good rock song, it is on the limit of what’s tasteful – even for these guys. I mean, good taste has never been what’s Steel Panther is all about, but with that one, I didn’t know if I should laugh or just be disgusted. I think I just went with a little bit of both.

But that last song actually speaks volumes for where Steel Panther are right now. The dilemma is, how much further can they take things? “She’s On The Rag” is on the limit to what’s funny and if they feel they have to top things with next album, they run a huge risk of just being pathetic and gross, instead of funny and laughable tasteless. Anyway, I think that if you’re into this band, then you’ll like this one. There is nothing new under the sun at all and you know what to expect. But with this band, nobody wants them to develop and go in new directions, that’s not what Steel Panther is all about. It’s also better than its predecessor – this time it feels more loose, like they didn’t over think things and just let things flow. Still, the big question is, do they really wanna keep on releasing albums? I think they have taken things as far as they can now. But as for now, they really managed to write a really good third album. Let’s just leave it at that…

2 comments on “STEEL PANTHER – All You Can Eat”