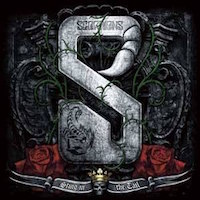 The Last truly great Scorpions album came out in 1984 and was called Love At First Sting. After that, every album became weaker and weaker. The follow-up, Savage Amusement (1988) was a good album but lacked the real spark and the platinum selling Crazy World (1990) was uneven and underwhelming and only sold like crazy because of the ballad hits “Winds Of Change” and “Send Me An Angel”. After that it went more and more downhill with each album with the horrible Eye II Eye (1999) as the band’s biggest low-point ever. But with 2004’s Unbreakable they were starting to show signs of the old days and with Humanity : Hour One (2007) they had a killer on their hands that showed the world that they were back and meant business. To follow such a killer album up can’t be easy and the fact that the word went out that they would call it quits after this album didn’t exactly ease the pressure. This time, the Scorps had some pressure on them to come up with the goods – and then some. And have a taste of the song titles: ”Raised On Rock”, ”Sting In The Tail”, ”Turn You On”, ”Spirit Of Rock”. This is as f***ing Scorpions as it gets. Yes, the pressure sure is on.

The band opens up the album in the best possible way. Both opener “Raised On Rock” and the following title-track are classic Scorpions hard rock – high-octane, ass-kicking, fuel-injected rockers that will stand side by side with any of their classic rockers from the glory days without a doubt. This is so awesome!  In ”Slave Me” we get a real groover. It’s a mid paced stomper with kicking rhythm and quite headbanging friendly and sleaze heavy – awesome. It’s ballad time when “The Good Die Young” comes along. Ballads are something Scorpions are very well-known (or in some cases notorious) for. This one’s heavier than their usual “Winds Of Change” type stuff. A great tune and a single, if you ask me. “No Limit” takes us back to the 80’s and the Blackout / Love At First Sting style of riffing. It’s punchy, hard rocking with a really good melody and the refrain is catchy without going for radio.

“Rock Zone” is ballsy, rough and metal-groovy. However, while the tune moshes on like there was no tomorrow it really don’t stick and feels like a filler. With “Lorelei” it’s time for the next ballad and this one’s more in par with what we’re used to get from these guys. It’s reminiscent of the oh so worn-out “Send Me An Angel”. It’s not bad at all – the fact is the refrain just screams hit. But even though I quite like it I can’t kick the feeling of knowing where the song is going before I get half-way through it. “Turn You On” is another track the takes us back to the glory days of their 80’s with their well-known type of riffing and a chorus that really hits like a ton of bricks. Another track that will sit well beside any classic Scorpions rocker on stage. Brilliant! “Let’s Rock” is a pretty heavy groover that holds a mid-tempo. But this is also another one of those half mediocre tracks that just don’t go anywhere. I don’t hate it but it’s another filler in my book.

Ballad #3 is called “SLY” and this one is just too obvious. It’s enough to read the letters – it’s spelled with upper-case and it doesn’t take a genius to figure out what they stand for. To me, it’s to play it too safe to rewrite one their biggest hits like this. It’s not a crap song per se but it just doesn’t work and it gets the skip-button alert from me. But the big groove hard rock of “Spirit Of Rock” makes up for the “Still Loving You Pt 2” debacle. Another classic Scorpions fat rocker that kicks up lots of dust. Great! The album’s closer is yet another ballad, the fourth. While four ballads are at least one too many for me, “The Best Is Yet To Come” sure deserves its place on this record because it’s a damn good one. Yes, it’s a typical Scorpions ballad but this one hits bulls-eye for me. It’s sticky as can be but I don’t care, I hold this one as their best ballad since “Still Loving You” and I believe it’s a great closing track.

I’m really happy to state that their last album’s greatness wasn’t just a one-off. With their new album, the Scorpions show that there is still life within the band and that they haven’t forgotten how to rock, how to write a catchy melody and that they still do remember what once made them a huge act. While their last album had great songs, not everything sounded like classic Scorpions but on this album everything does. With this CD, Scorpions are back with a bang which makes it so weird that they have said that they will quit after the following tour. Sure, it’s great to say good-bye when you’re on a high but at the same time it’s a bit sad when they have proved that they still have a lot left to give. Scorpions have a song called “Don’t Stop At The Top” and after a great record like this, I sure hope that they will listen to their own advice!