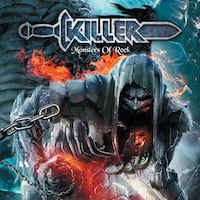 One thing that I really like about reviewing music is those downloads links I am being sent. Because I have always liked finding new bands and I am one of those geeks that like it when I am being proved wrong about a band or an artist that I don’t like, for some reason. Especially, the links that contains music with bands from more “unusual” countries. I mean, we’re all used to English and American bands. German, Swedish and even Danish and Finish bands aren’t anything that anyone will even raise an eyebrow for. But then there are countries like France, Italy, Greece and Spain that holds big hard rock / metal audiences, but that might not gush us with bands. I recently wrote a review on a French band called Dygitals, a band I would never ever have even known of if it wasn’t for this site. And here comes the next one, this time from Belgium. Being the sole reviewer on this site, I might not have the time to review everything that being sent my way, but when it comes to bands from countries like France or Belgium, I get very curious. Now, if I’m gonna be honest here, I don’t think I would have bothered checking out a band named Killer with an album called Monsters Of Rock if it hadn’t come my way the way it did. One reason is this: Killer is not a good name for a band and the name of the album is just too unimaginative, I’m afraid. I do know that there is a language barrier here and if you’re not used to the English language, these things can very well be one of those things that might sound good to yourself, but for others… well, maybe not so much. So, let’s just get some history from this lot then. Well, it looks like this gang has been on the prowl since 1980 – this means that they have been rocking for some 35 years now, which is impressing when you think about the fact that they really have only gone close to nowhere since then. Killer was founded in 1980 by Paul “ Shorty” Van Camp (lead guitar and lead vocals) and “Fat Leo” (drums) who had just split up their previous band Mothers Of Track. After some auditions “Spooky” (bass and lead vocals) joined the band. They managed to get a record deal with WEA and just a few months later their debut album Ready For Hell was released. But due to record company problems, only two more albums – Wall Of Sound (1981) and Shock Waves (1984) were released before the bands called it quits. However, Killer resurrected back in 1990 for one album, Fatal Attraction, but the timing wasn’t really all that – the coming of grunge made sure that they had to put the band on hiatus once more. Killer were (and still are) a metal band, heavily influenced by bands such as Saxon, Iron Maiden, Accept and early Def Leppard and metal bands, especially the more unknown, were mercilessly slayed by goatees, flannels and Doc Martens in the mid 90’s. But when the 90’s were over and the new millennium had come, metal was on its way back again so Shorty started the band up again with two younger dudes and recorded Broken Silence (2003) and Immortal (2005). Some touring aside, not much happened with Killer for the last 10 years except for a reunion with Shorty and Spooky, but that didn’t last long.  The band that has finally released Killer’s new album consists of Shorty with Jakke (bass) and Vanne (drums).

The thing is, when a band has been going on for 35 years, albeit with a couple of hiatuses (is that really a word…?) in there, I always wonder why they never have made it in that time. I don’t mean that you have to be a headliner act on all the festivals around, but you should at least have made a name for yourself in the metal community. I mean, I consider myself somewhat a nerd when it comes to knowing about bands that are pretty unknown and I didn’t even know that Killer existed. Is it only bad luck and circumstances beyond the members’ control that makes for the no-show of success? Well, a listen or two to their brand new album might answer a question or two. The title track opens the record and first impression is that it is an ok song, although to these ears it sounds like a second-rate Accept. Not bad, but it doesn’t exactly rock my world either. “No Exception To The rule” is a ball buster, a heavy piece that sounds like a mix of Saxon and Accept. Come to think of it, it has lots in commons with Herman Frank’s (Accept) solo stuff. Not bad at all. Anyone remembers the German metal band Faithful Breath that released a record in the mid 80’s? No? Well, “Shotgun Symphony” sounds like them, but think Black Sabbath playing Accept music – or the other way around – you’re pretty close to how this sounds. To name drop every metal / hard rock band known to man and their mothers in songs seems to be the thing to do nowadays. Finish glamsters Reckless Love did it in their song “I Love Heavy Metal” and earlier mentioned Dygitals did it in their song “30 Years Of Rock” and now Killer does it as well. The song is called “Back To The Roots” and it sounds just as stupid here as it does on the other two songs mentioned. The musical aspects of the tune is alright, though. It sounds like a more commercial Motörhead. “Danger Zone” –  a title used to death by metal bands – is a metal ballad and sounds exactly like all of them early 80’s NWOBHM-bands that came riding on the second wave after Saxon, Maiden, Samson, Diamond Head and Praying Mantis, those who never got anywhere and are now forgotten. No, I didn’t like this song. “Firestorm” is total Accept and I really like it, it has a metal groove that is really catchy. It gets really bad with “Deaf, Blind And Dumb”, a fast metal / punk song. Sounds like a bunch of teenagers that just started playing in their parents garage. And then there’s “Forever Metal”. I know there is a language barrier here, but no one should be able to sing a lyric like this with a straight face. It sends shivers down my spine in pure embarrassment and this tune could make Manowar blush. “Hold Your Head Up High” is really good and Motörhead comes back here, Motörhead on a pop trip if you can imagine that. “Making Magic” turns out to be this album’s finest moment – a blues metal song with an addictive groove and a brilliant melody. When it comes to “Rock City”, the guys has to make sure that no one in Ronnie James Dio’s camp gets to hear it because they just might end up with a big, fat subpoena on their hands as it’s a total rip-off of Dio’s “We Rock”. Lyrically it’s just a shameless cliché. Thankfully, the end the record on a good note. “Fake” is a straight forward hard rocker with a great groove and nice hooks. Maybe that is the way to go in the future for this band.

I have to be honest here. This is not a very god album at all. I really wanted it to be because it would be awesome to be a fan of a Belgian band, but it’s really not. The whole sound of this album just reeks of “garage demo tape”. It might be low of me to take shot at the singer’s accent, but it’s really annoying. I don’t crave 100% accent-free english, but this is a bit too much. Also, the lyrics borders to pure embarrassment – don’t get me wrong, I know it’s hard when English is not your native tongue, especially when you’re from a country that doesn’t use English that often – but that’s not what the issue is here. No, the lyrics are clichés on clichés on clichés, so much it’s actually hard to listen to some of the tunes. And it’s not just the lyrics that stacks clichés, even the melodies and riffs are clichés – I mean, man, they even stole Iron Maiden’s logo type fonts. All of this takes me back to where I wondered why these guys hasn’t made it after 35 years – I know why now. Killer has all the right intentions, but I’m afraid they just don’t have the skills and talent to make it on their own. What they need is a producer – a hot-shot one – to help them sort out their ideas, lead them through what to use and what not to. I really hate to slag this off, but even though there are some good stuff on here, most of it just don’t cut it. If there is a recipe to make it for these guys, I just don’t know, but what I do know is that it’s back to the drawling table for them. Hopefully with a producer in tow.

2 comments on “KILLER – Monsters Of Rock”