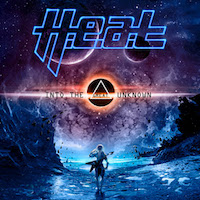 This is a band that needs no further introduction, so I’ll skip that. I won’t go into the whole Kenny vs. Erik thing either. What I will say, though, is that I love H.E.A.T. I love them on record and I love them as a live band. I thought their two first records were good, but not more, so it was with the brilliant Address The Nation (2012) that I became the fan I am today. The album is a superb AOR record where all the songs sounds like a hit but it wasn’t all smooth, pink and fluffy, no, the guys brought a lot of attitude and cockiness into the mix which made the album stand out from a lot of records in that genre. Much to my surprise, the follow-up Tearing Down The Walls (2014) was even better – and there I was wondering how they would be able to top its predecessor. On that record, I love every song and the fact that the band had toughened their sound into more melodic rock than actual AOR was something I embraced. It was rougher, heavier and more kick-ass, something I think the band benefited from. They also managed to do something that not many bands manages these days – to make a live album (Live In London, 2015) that actually sounded live and not just like a greatest hits record with applied crowd noise.

All this means that the new record is a piece of music I have been looking forward to hear for some time now  – and it also means that now that it is here, expectations are almost ridiculously high, expectations that were almost lowered by the release of their first single from the album, “Time On Our Side”. The song was a big disappointment to me, see. Even though it is a brave move to release something as experimental as this as the leading single, I’m not sure it was the smartest thing to do. I mean, the tune doesn’t even sound like H.E.A.T. at all. First of all, it’s a total pop song without even a trace of rock. A huge pile of electronica and a touch that even sounds like modern disco makes the tune even more out there. Sure, it is catchy and all but way too much mainstream radio pop for me. Ouch! The song made me nervous. Every band makes a record that slips in quality after a few great ones, so I was starting to wonder if this album would be that one. Also, original guitarist Eric Rivers quit the band last year and his replacement was another original member, Dave Dalone, who quit the band in 2013. Would that affect the quality of the songs? I would soon find out.

Fortunately, it looked like the leading single wasn’t representative for the album as opening track “Bastard Of Society” is hard rocker in full blast, crunchy, heavy and kicking but with a brilliantly catchy chorus that screams H.E.A.T. all the way. The tune is a continuation from the last album which made me really happy. Love the tune! But that makes second song “Redefined” a bit misplaced in the track list. The song takes the tempo down and just like on the leading single, this is a pop song with a bit of electronica wedged in there. But, what this song do have is a fantastic chorus that is all melodic rock and a very recognizable H.E.A.T. melody. The tune is extremely catchy and very hit-friendly. It’s an awesome tune that I’m sure will be a future single. It must be! But the tempo rises again with “Shit City”, a bad-ass stomper with a heavy groove and lots of attitude. It’s a stellar rocker with a fists-in-the-air kind of vibe and a distinct chorus that grabs a hold right from go. Classic H.E.A.T. and a bloody brilliant song! Then it’s time for “Time On Our Side” and that one’s already been discussed here, but I can say that even though I didn’t like it at first, it has grown on me after a few spins. I don’t find it a great tune but it gets better and better. God knows what I will think of the song in a year or so.

They follow it with “Best Of The Broken”, a rough and ballsy kick-ass rock ‘n’ roll number with lots of attitude. It holds a punchy beat and striking riffs combined with a masterful chorus that is impossible to get rid once it has stuck in the head. Awesome! “Eye Of The Storm” is the album’s big (power) ballad. But no cheesiness is to be found, instead it takes a heavier direction and it reminds me of a heavier Dare, much because of Erik Grönwall’s partly resemblance to Darren Wharton here. But there is also a heavy and rough middle-break in the song which gives it some contrast. Of course, this is a single and with an über-sticky chorus like this, it should be. The hit-alert here is enormous! So amazing! After a ballad we need to rock and rock we get and the rock in question is called “Blind Leads The Blind”. It actually starts out swinging like a hard rock ABBA, but it soon turns into a bona fide, solid melodic hard rocker. The tune holds a heavy rhythm, some gritty guitars and the chorus is pure catchiness deluxe. In my book, this is a hit and should, of course, be a single somewhere down the road. Absolutely brilliant!

“We Rule” is another surprise where experimenting has been done. It’s a soft pop ballad, laid-back and parts of the song visits opera influences – or at least musical ones. There’s a Queen vibe weaved in as well, it’s big and bombastic – and very memorable. It’s not one of the album’s strongest songs, but still a good one. However, the song really doesn’t fit in and it stands out like badly bruised thumb here. “Do You Want It” is more of a pop song in a rock disguise and it holds an arrangement that brings old 80’s pop chart songs to mind. The bridge is also a bit musical-laden but the chorus is massive and it holds a fantastic groove. Yes, it’s a effing killer tune! They close the album with the seven minute title-track and the band takes yet another turn. It holds a darker atmosphere, it’s slow, heavy and a bit gloomy. The rhythm is tough and biting and there’s a Led Zeppelin goes melodic rock over it which contrasts brilliantly with the quite beautiful melody and the catchy refrain. The tune ends with a bit of a jam and an acoustic guitar thing slows the song down before it heavies up for the last call. The tune is a masterpiece and I just love the daring, progressive thinking. This is how you close a melodic hard rock album, folks!

I must admit that the album was a disappointment the first time I gave it a spin but already by the second run I had surrendered and with the third one, I was floored. Yes, this is an experimental record and at times, they’re drifting pretty far away from the sound we’re used to and it stands pretty clear why the album is called Into The Great Unknown. But just as often, the classic H.E.A.T. sound is very recognizable. It’s understandable that as an artist you need to develop, move forward and try new things to not stagnate and I’m all for that – as long as you don’t stray away from what once made you the band you are and gave you all the fans you now have, but I don’t think H.E.A.T. has done that except for a couple of tracks – “Time On Our Side” and “We Rule” being the most obvious ones. Even though this album doesn’t reach the greatness of its predecessor, it’s pretty damn close and I do embrace the fact that they refuse to release the same album over and over again. As long as the songs are brilliant – 8 out of 10 are and the worst one is still good – and the production shines, which it does, then I see no problem in a slight change of style. So, no, this is NOT the album where H.E.A.T. slips quality wise. Quite the contrary, this is a magnificent album, but one you might need to have a little patience with before it sticks. Welcome back, guys!

Freedom Rock
Address The Nation
Tearing Down The Walls