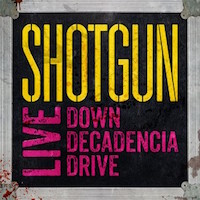 Shotgun Messiah were the Swedish hard rock / metal / glam band that were close, so very close to making it really, really big. The band was formed in Skövde, Sweden as Kingpin back in 1985 by guitarist Harry K Cody, bassist Tim Tim (who later changed his name to Tim Skold), drummer Stixx Galore (who later dropped Galore) and singer J.K. Knox. A few years later Knox left the band and the band got hold of former Easy Action singer Zinny Zan (who changed his name to Zinny J San). Rumors has it that they were trying to get hold of Hanoi Rocks singer Mike Monroe first, although that has never been confirmed. The band got themselves a record deal and released the critically acclaimed debut album Welcome To Bop City in 1988, sporting a cover so full of colors, Poison looked pale in comparison. They looked like they had robbed a candy store. But the glam was just looks, musically they were heavy, groovy and catchy and they had nothing in common with bands such as Poison or Pretty Boy Floyd. It didn’t take long before America opened its eyes and record companies smelled success. They signed with Relativity Records and moved to sunny California to be part of the ongoing hard rock scene over there. Due to legal reasons, the name Kingpin had to go and they renamed the band Shotgun Messiah and in 1989 they released a re-mixed version of the Kingpin album, this time self-titled. That album shipped gold over there and the big break was just around the corner. However, all wasn’t well within the band and in 1991, Zinny got the boot / quit the band and for their second album, the brilliant Second Coming, Skold had taken over lead vocal duties, leaving the bass over to one Bobby Lycon. But when the internal fighting continued and the album flopped, both Lycon and Stixx jumped the ship, leaving Cody and Skold as a duo. Violent New Breed (1993) came as a shock for many old fans. Musically, the song followed its predecessor style wise, but the guys had hired one Cybersank, a Swedish producer / engineer with a taste for industrial stuff, and the record was just that – an industrial record. As a big fan myself, I liked it, but the record would have been lots better without the industrial production. When that album went nowhere, Skold and Cody decided to call it quits and that is where Shotgun Messiah have been since the mid nineties. And by the looks of it, it is where Shotgun Messiah will be in the future as well.

Fast forward to 2013 and the 25th anniversary for the release of Shotgun Messiah’s debut is coming up and there was some talk of a reunion to celebrate that. Of that came nothing, Skold and Cody just wouldn’t have it. Enter fan boy Chris Laney. Laney had a band with Zinny called Zan Clan and is a huge Shotgun Messiah fan. Laney wanted a reunion,  so he talked to Zan and got hold of Stixx and they both agreed to participate, but Skold and Cody still didn’t want to. So what to do? Well, Laney offered his services as a bass player and he was joined by his friend and Laney’s Legion guitar hero Rob Marcello (also in Danger Danger and The Defiants), also a huge Shotgun Messiah fan. Done deal. But to avoid any confusion about the band, they decided to only use half the name – 50% original members equals 50% of the name – hence the Shotgun-only moniker. However, the guys were very clear with the fact that this was just a celebration of an album they all loved and nothing else, just a short tour and after that, no more. No new songs, then. I saw Shotgun on a few occasions and they were bloody awesome so this live album is really heaven-sent for Shotgun Messiah fans like me.

The band open with a bad-ass, sleazy monster version of “Squeezin Teazin” and man, if I close my eyes and just listen, this could just as well be the original band – and they sound amazing. “I’m Your Love” follows and the band kicks up dust for sure – and then some. This tune really comes alive on stage. After that Zinny welcomes us all to “Bop City” and the mean groove of the song is right up in your face. Shake, shake, shake!!! You f**king bet we do! Why “Nowhere Fast” never became a single back in the day is beyond me. It’s sleazy, heavy, groovy and with a chorus to die for and if this version don’t make you wanna rock out big time, I don’t know what will. “Dirt Talk” was always a favorite tune of mine although it was always a bit in the shadow of many of the other killer tracks. On this record, it starts with a band introduction where Marcello gives just a tiny snippet of Harry Cody’s instrumental masterpiece “The Explorer”, that’s all we get to hear of that tune, but when the almost funky groove breaks loose, the 21-year-old me comes out – fanfuckingtastic! “Nervous” is next – my all time favorite Shotgun Messiah song – and listening to it here brings back memories of the goose bumps I got when I heard this tune live for the first time. Yes, they nail the song hard. In my book, this could also have been a single back in the day – catchiness deluxe! “Shout It Out” was Shotgun Messiah’s first single and it should have been a smash hit. Zinny introduces the song stating that Shotgun Messiah were the first band combining rap with hard rock, but it’s not quite true. Aerosmith did “Walk This Way” with Run DMC back in 1985 and pop metal band King Kobra did a rock/rap tune called “Home Street Home” also in 1985, but yes, they were among the first. The original had Cody and Skold rapping the verses and here Laney and Marcello takes their place – and they do it extremely well. The guys do know their Shotgun Messiah well – killer version! They end the set with the band’s biggest hit “Don’t Care Bout Nothin'” and as a surprise, the guys have brought along original vocalist J.K. Knox to help them sing tune – the first time ever he takes the stage doing the track he helped co-write since he left the band way back when. How cool! It’s a kick-ass version of the song and a great and natural closer.

Any complaints then? Well, I wouldn’t call it complaints, I’d like to use the word “wishes” instead. First of all, no “The Explorer”. Yes, I know, the song is too much Harry Cody’s baby, but to me, that song is synonymous with Shotgun Messiah’s debut – at least somewhat – and I’m sure Rob Marcello could play it note by note without any problem. I really wish the song had been included. Second, with “The Explorer” excluded, we only get eight songs. The guys did play “Sexdrugsrocknroll” from the Second Coming album during their tour and it sounded brilliant. I really think it should have been included here even though this is the celebration of the debut. How amazing it would have been to be able to listen to that song with Zinny on vocals – Second Coming is a great album, but it would have been even greater had Zinny sung on it. But other than that, the record is perfect. There’s probably the odd studio touch up here and there, but the album just oozes live, the live feel is right in your face, the performances are all killer and the record sounds terrific. I usually don’t bother with live albums anymore, but this one is a must. Whatever you do, don’t miss! This record really is a must!