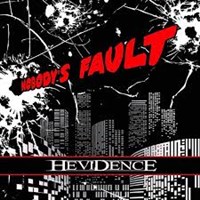 One thing I love about writing reviews is that I get the chance to check out new music that I might never have stumbled over otherwise. I’m a sucker for finding new music – new bands, new records by old bands, old records by new bands – I also love when I’m wrong about an act that I might have slagged off before, when I hear that record that changes my mind about a certain band. So it’s always exciting when a new download link enters my inbox. But it’s not always fun, sometimes I get albums that I find awful and sometimes there are albums that just doesn’t do fuck-O for for me – you know, sometimes you win and sometimes you lose. And every album that I find good and interesting enough is always a buy for me even though I got it for free in the first place – support the artists you dig! Hevidence are a new band for me, a band I had never heard of before. The band was formed by Italian guitar player Diego Reali in 2010 as Evidence and released an album, There’s Only Ten Left in 2011, but since Evidence went through so many line-up changed, Reali decided to change the name of the band as he believed that it wasn’t the same band anymore. I reckon the Hevidence moniker came to as he probably didn’t want to stray away from a name that might had been known to many (well…) people and that only adding an H would help old fans recognize who was involved in the band. Reali have a history in the band DGM (another band I discovered as a reviewer) with which he toured and made albums with for over ten years, starting out in 1996. I have only heard DGM’s latest album The Passage, which did not include Reali, but since I liked that record, I found this interesting enough to check out, for Reali’s connection with the band if not for anything else.

The album kicks off with “Dig In The Night” and even though it has a really cool opening riff that bodes well, it turns out that the song is just a standard hard rocker with a metal vibe early 80’s style. Not bad, but quite forgettable, I’m afraid. The following title track is a melodic hard rocker, the way arena rock sounded back in the late 80’s / early 90’s. It’s pretty good although it’s not spectacular by any means. “Miracle” comes along as a NWOBHM pastiche with a Yngwie Malmsteen meets Accept kind of guitar solo. Even though it’s not a crap song, I have heard this a million times before and the song just passes by more or less unnoticed. “So Unkind” sounds like an early 90’s Sunset Strip arena rocker with a metal influence. There’s also a twitch of big band jazz in there, something that saves this otherwise bland tune. “Ave Maria” is nothing more than a Yngwie Malmsteen rip-off – “Rising Force” has already been written, lads. “Overdrive” is easily the best song so far, but it’s still only good and not great. It’s in the vein of Europe around Prisoners In Paradise (1991) meets Mr Big with a slight heavy metal influence thrown into the mix.

The Mr Big influence returns in the opening riff of “I Want More”, but the tune soon goes into standard-land. Ok song, but not that much more. There is some glistening smoulder when the big grooved melodic hard rocker “Out Of This Time” kicks in. On top of that there are some cool vocal harmonies that’s reminiscent of Extreme. The first great tune so far and it shows what this band is capable of. “Pack Your Bags” turns out to be great song number two. It’s a big jazzy and funky hard rocker with a bad ass groove that dwells in the early 90’s arena rock scene. “All I Ever Needed” might have a title that brings the mind to a power ballad, but this tune is far from that. What we get here is a fast paced rock and roll swinger, written for the stage and/or the party. It’s a good song, but it’s not overly memorable.  The album ends with “Note”, an instrumental guitar piece where Reali goes all neo-classical on us. Sure, the guy is a really good player but this song just sounds like a poor attempt to clone Malmsteen.

To me, this record turned out to be a disappointment, a poor album where almost nothing stands out. There are actually no crappy songs per se, but most of the tunes are too forgettable and even though the album could be a cool and varied rock album with a mix of styles such as power metal, heavy metal, arena rock and plain hard rock, the lack of identity and a sound of their own only makes the record sound schizophrenic. Which is a pity because there are a couple of really good songs that shows that the guys has potential as song writer and all the musicians are really good and makes faultless performances. I’ve heard a lot of albums that are worse than this, but it doesn’t really help here. Back to the drawing table is my suggestion.