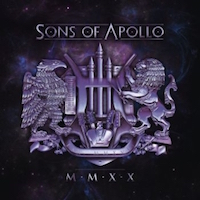 When the news broke back in 2017 that yet another prog-metal super-group, formed by the ever hard-working drummer Mike Portnoy (Flying Colors, Dream Theater, Transatlantic, The Winery Dogs, Liquid Tension Experiment etc.), I wasn’t sure if I had it in me to give a rat about yey another one of his projects. However, when I saw which musicians who had joined him, I changed my mind. You just don’t look the other way when singer Jeff Scott Soto (Talisman, W.E.T., Trans Siberian Orchestra, Yngwie Malmsteen, Eyes, Axel Rudi Pell), guitarist Ron “Bumblefoot” Thal (Guns N Roses, Asia, Lita Ford), bassist Billy Sheehan (Mr Big, The Winery Dogs, David Lee Roth, Talas), keyboarder Derek Sherinian (Black Country Communion, Alice Cooper, Dream Theater, Kiss, Yngwie Malmsteen, Joe Bonamassa) and Portnoy joins forces. Worst case scenario, it would only had been an interesting mixture of killer musicians.

When I heard their debut album Psychotic Symphony, I was really glad I gave a damn because the album was great. Filled up to the edge with brilliant musicianship but also with great songs, melodic and catchy over all the musical displays, the album brought in everything I wanted in a progressive Hard Rock/Metal record – and I’m not that easily impressed with progressive music, there are only a few bands that I really appreciate. Sons Of Apollo became one of the chosen few for me. Another question raised was, with the busy schedules of all musicians involved, would this be just a one-off? In 2019 they released a live album – Live With The Plovdiv Psychotic Symphony – a triple CD I still haven’t gotten around to check out but at least it showed some kind a sign that maybe this band was to be. The guys have now found the time to write and record their second studio-effort – and expectations are, of course, massive.

The opening track “Goodbye Divinity” is also the first single – and it only takes one listen to figure out why that is. Everywhere in the song, there are memorable melodies and the chorus is really strong, catchy as damn but not in a radio-friendly way. The song starts with Sherinian’s synth-melody and Portnoy’s drums and then Bumblefoot’s heavy, tuned-down guitar follows, bringing on some fat, crunchy riffs. It’s a progressive track that holds some time-changes but at the same time, pretty much a straight-forward melodic Metal track with lots of hooks and memorability. Brilliant. “Wither To Black” follows, robust and stompy where their brand of progressive Metal meets up with some groovy Classic Rock, Led Zeppelin influenced guitar riffing and a Hammond Organ that alters with a clearly Rush inspired synth sound. The solo-part shows Sherinian and Thal doing a trade-off and Soto’s vocal melodies are all infectious with a striking refrain as the icing on the cake – fabulous stuff!

“Asphyxiation” is a heavy and rough belter that aims right for the throat, in-your-face on a steady and solid ground. It’s aggressive and menacing, prog-laden on a stone-hard rhythm but also very melodic, plus we get a mid 70’s Rainbow/Deep Purple feel during the main solo part. The beat is groovy enough to get into headbang mood and the chorus hits right where it should. Very good. Latest single “Desolate July” starts with a church-bell intro and continues slow and stripped with only a piano and Soto’s melancholic vocals before the rest of the band comes in and heavies it up. With heavy riffs, a fat rhythm and a Hammond Organ, the tune turns into a dark, slow and heavy progressive Metal power ballad, somewhat bluesy. The main melody is quite contagious with an amazing chorus that’s easy to embrace. This is brilliant – to put it mildly.

A classical piano piece opens “King Of Delusion” with a darker atmosphere before Thal’s edgy and sludgy riffs brings the rest of the band in and the song gets ferociously heavy and hard-striking. Riffs, rhythm and the vocal-melody in the verses reminds me some of Ozzy Osbourne’s “Perry Mason”, but not enough to shout “theft” – it feels more like a coincidence. The song continues with a slow and mellow passage only to get heavy again. Another section that has Sherinian and Portnoy take their instruments for a duet before Thal delivers a fierce solo with some thrashy riffs attatched. The song ends on a fast and brutal note that has Soto trading screams with Sherinian’s Hammond-like keyboards. Progressive Metal, you say? Hell yeah, but it still brings the melodies at front which makes the song stick. Great.

Second single “Fall To Ascend” is a proggy take on classic Metal – both Dio and Judas Priest influences are all over the song, especially in Bumblefoot’s riffs and a stone-hard rhythm that provokes your urge to go headbang bananas. It’s an in-your-face metal-belter on a straight ahead beat with a glistening edge but also with progressive twists – and of course a mighty refrain that’s made for a live situation. Killer! “Resurrection Day” brings out a blender and shoves 70’s Scorpions, Yngwie Malmsteen and 70’s Rainbow into it and pushes the start button and when it’s done, they spice it up with a chunk of Dream Theater for good measure – Classic Rock, Hard Rock and Prog-Metal all in one, in other words. The rhythm is stompy, groovy, prog-laden but also contains shitloads of hooks, a big soundscape with colorful melodies and a chorus that is tattooed on the melodic side of the brain. Awesome!

To round this trek off, they bring along a 15-minute beast of a prog-rock-metal song called “New World Today”. The tune begins with an atmospheric keyboard/guitar intro which takes them into a progressive Dream Theater like groove with Bumblefoot providing us with a melodic guitar-melody. The verse comes in on a heavy and punchy stomp with rowdy riffs but it also holds a 70’s Hard Rock swing and when the chorus comes along, we’re given some infectious and striking melodies with catchiness enough to sell. The song then speeds up and hardens, getting fast and rowdy on a Metal stance with thrashy riffings and thunderous rhythms. The band then dives headlong into a prog-rock passage where Sheehan gets to shine before it turns aggressive Heavy Metal once again. The next turn is a slow and spacey breakdown on a solid ground and a dark ambience, a bit jazzy even. When Soto comes back in, the tune keeps the slower pace, quite subtle in structure but then the whole thing takes on an upbeat and straight-forward tempo and brings on some smooth Melodic Rock melodies while the rhythm is based on classic Hard Rock with proggy tendencies. It’s a brilliant, epic track and a great and natural closer for an album like this.

When it comes to progressive Metal/Hard Rock, this exactly what I’m looking for – where solid song writing and strong melodies are in focus. Sure, the record is not short on showing off the guys’ musical skills but it never takes over like it does with so many bands within this genre, it only adds character to the songs and the sound. Where the debut album was really damn good, the band was (probably) more a project than an actual band, but on this record they have found their identity, it’s a more relaxed effort and it feels like Sons Of Apollo now stands on its on two feet and comes across as a real unit – they have every possibility to now make this their priority and take it to the next level. This album is superb and the 9/10 is extremely close. This could very well turn out a top 10 album of 2020.