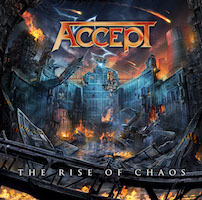 To change the lead singer in a famous band can be lethal, especially if that lead singer is a big personality and even someone who many people associate the band with. Look at Mötley Crüe, they changed to a way better singer but the fans didn’t want to know. On the other hand, a band like Van Halen succeeded brilliantly with their change. At least the first time. Accept tried once, back in 1988, when they parted ways with Udo Dirkschneider, a true metal icon. David Reece was a great singer but he just wasn’t Accept enough. And the music had gone from metal to arena rock which didn’t sit well with the fans. So when Accept parted ways with Udo for the second time, we were many that thought that they was bound to fail. But the band and new singer Mark Tornillo proved us wrong. The new line-up’s debut album Blood Of The Nations (2010) gave us the classic Accept sound with a whole bunch of killer tunes and Tornillo’s voice was perfect for the band. They also proved that they still were a fantastic live-act full of passion and fire. Accept were born again, without the shadow of a doubt.

The follow-up Stalingrad (2012) wasn’t as good. Even though it was far from bad, it sounded a bit rushed and contained a filler or two too many. But they set things straight with the brilliant Blind Rage (2014), a record that, in my humble opinion, could easily be compared to any of the band’s classic albums – and with a record like that in their back-pocket sure sets the expectations for the follow-up sky-high. But things had changed within the Accept camp – guitar player Herman Frank finally had it with not having any of his musical ideas taken on by the band and not even getting to play on the records so he took his guitar and drummer Stefan Schwarzmann and left Tornillo, guitarist Wolf Hoffmann and Peter Baltes to their own devices. I can understand Frank, he’s been with the band a long time and some stuff on his solo records would fit an Accept record like a glove. New guys are Uwe Lulis (guitar, ex- Grave Digger) and drummer Christopher Williams. Frank and Schwarzmann now have their own outfit Panzer. So how about Accept’s new release then? Well, read on.

Well, it sure starts out like a charm. Opener “Die By The Sword” has an intro that brings my mind back to “Metal Heart” and the tune then blasts off with some killer riffs and a balls-to-the-wall (sic!) thunderous wall of sound. The chorus is effective and distinct and this is what this band is all about – classic Accept in every way. Awesome. “Hole In The Head” is a heavy metal rocker in mid pace and it is unmistakably Accept. However, the chorus fails to deliver and leaves me wanting more. It’s not bad, but I get the same vibe as I get from Death Row (1995). It lacks that catchy melody that sticks in your mind forever. The title track is the first single and video from the album and the first time I heard it, I thought it was ok, but I was a bit disappointed. It’s hard, fast, aggressive and punch in the gut and sounds like a wounded bear running amok. The song has grown on me and I like it but it’s still a bit underwhelming, to be frank.

Next up is “Koolaid”, a tune that gotten some mixed reactions from fans online. I, however, think it’s awesome. It’s a melodic metal tune that sound wise comes across like a mix of Blind Rage and Russian Roulette (1986). It’s heavy, catchy and full of classic Accept hooks, just they way I love ’em! “No Regrets” is a kick-ass, fist-on-the jaw knock-out that takes no prisoners. The song kicks and bites with a distinct melody and a chorus that hits hard. This could easily have been off the Blood Of The Nations record. “Analog Man” is a more of a hard rock tune with a metal influence and I think the title speaks for itself when it comes to the lyrical content. It’s a pretty simple tune but its chorus is so memorable it will stick to your brain if you were in a coma. The pre-chorus is also very reminiscent of “Balls To The Wall”, so much I find myself singing “…you got your balls to the wall man” over the chorus. It’s a brilliant track and the recycling doesn’t take anything away from that.

When it comes to “What’s Done Is Done”, not much more can be said other than it it is classic Accept with a heavy rhythm, a huge melody and a very catchy refrain – very convincing. “Worlds Colliding” is brilliantly catchy and gets stuck inside my head right away. This is metal with a bit of a pop twist but Tornillo’s roaring voice makes it all but cheesy. I wonder if this is a left-over from Blind Rage – it sure sounds that way. The band gets more aggressive with “Carry The Weight”, a fast, glistening, ferocious metal track. But on top of that comes a melody so catchy and sing-along-ish that it almost borders to power metal. Yes, hard and heavy but still with enough catchiness to sell – very good indeed. The closing track, “Race To Extinction” opens with a slower riff but soon bursts into fast, brutal, aggressive and wild metal puncher. Although I dig the roughness of it, the chorus fails to deliver and in the end, the tune comes across as quite forgettable.

As a whole, this album is not close the brilliant Blind Rage, but it’s almost up there with Blood Of The Nations and just a tiny bit better than Stalingrad. And it sure kicks the butt of earlier albums such as Death Row, Eat The Heat (1988) and the self titled debut from 1979. I admit that I was somewhat disappointed by it the first time I played it but it has grown on me since. What I miss some on this record are the striking melodies and über-catchy choruses that the band is known for and even if many of them are really in your face and catchy, it sometimes feels like they have had a bit of a hard time to get them totally right, like they did on the last album. Still, it’s a really good album. Four albums in, Accept has since long proven that they are a strong force to be reckoned with even without Udo and Mark Tornillo makes sure that Udo isn’t missed at all – as a lead singer and as a frontman. But why not take a chance and let some of the other members help out with the song writing next time if they can come up with the goods? Who knows, Accept might just benefit from that.