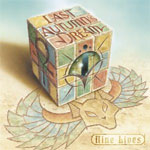 Some people work real fast. It feels like their last album, the fantastic Yes were just released when they put out their new one. When bands releases albums so close to each other, you might worry that the quality of the songs and the sound will be in jeopardy. But, the fact is, these guys are true pros and would never release anything half arsed.  Besides, their touring schedule isn’t exactly tight,  if they do tour at all! That makes it easier for them to concentrate on writing great songs and release an album each year.

To be quite honest, I was never a big fan. In fact, I had a hard time getting into their AOR and I always thought they sounded somewhat uninteresting in a ”heard it a million times before” kind of way. Never ever bad, but never great either. That was until I got my hands on their last album and looking back, I guess I was wrong. So it was with high expectations I sunk my teeth into their latest effort and at first listen, it left me a bit cold. It didn’t toke me long before it grew on me and now I’m sitting here with another killer LAD album.

”In A Perfect World” is a brilliant AOR number, the title track is just great with its Beatles-esque melodies and ”Is This Just Another Heartache” they have a killer ballad on their hands. ”Megalomania” is fantastic, with an early 80’s AOR sound, in ”The Last To Know”, catchy as hell, singer Mikael Erlandsson duets with Jeff Scott Soto and the ballad ”Don’t Let Love Fade Away” is just so cheesy that it becomes a cheese killer. The album’s big WHY? Is ”Waited A Long Time”. It is listed as a bonus track. Come on guys, the song is bloody great! But there are also downsides. I like their last album a bit more, but that’s just me. However I would like to have both the guitars and drums higher in the mix and the album would probably benefit from a heavier production. Other than that, there are no complaints from this guy.

Hopefully they will make this more of a band than a project in the future. I, for one, would love to see these guys hitting it live.