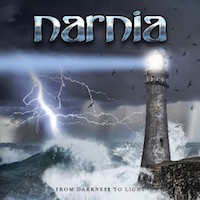 Christian Metal. I know that some metalheads have a problem listening to bands praising God and I can understand that the message isn’t really what people might want to hear when the go all in, listening to metal. But on the other hand, they have no problem listening to satanic metal and if we’re being honest, those are just two sides of the same coin. It’s religion and both sides want to spread their message to the people. Personally, I don’t give a crap as I’m not the least religious myself. God and Satan are both fictive characters made up by men, the way I see it but if you want to believe in either, whatever gets you through the night. Musically, I have no problem listening to both sides if I love the songs – and I’m a huge Stryper fan. I also dig Dimmu Borgir. So as long as you deliver the goods musically and bring me great records I’m fine with whatever – knock yourself out. And musically, please knock me out as well.

All this christianity babbling above is of course because Narnia are a christian band. When it comes to Narnia, I’m not the least familiar with their music. I have known of the band for years but since they’re wandering around in Power Metal land, I haven’t had the urge to check them out before. The band was formed by vocalist Christian (how bulls-eye is that name when you’re a christian?) Liljegren (Divinefire, Audiovision, Golden Resurrection) and guitarist C.J. Grimmark in 1996, they released their debut album Awakening in 1998 and have since released six more studio albums where the last one – it’s self-titled – came out in 2016. When the band now releases studio effort # 8, a lot of work was laid on Grimmark’s shoulders as he’s responsible for both production duties and the lion’s share of the song writing. For me personally, this album is my first acquaintance with the band ever.

Kicking off the album with the leading single “A Crack In The Sky”, we’re served an uptempo hard-rocker that’s metal-fueled with a slightly progressive twist. It’s punchy and direct with staccato, Metal riffing but the refrain is melodic enough to bring on some major catchiness which in turn makes it lean into Power Metal territories. Heavy and melodic, the song might not be a hit but it sure is a statement for what to expect. Single # 2, “You Are The Air That I Breathe”, comes along with some crunchy riffing that brings on a modern W.A.S.P.-like sound. It’s a bit slower in pace on a stompy rhythm and a punchy beat but when the chorus comes in, the song speeds up some and the big melody-line is striking and effective. As a single, this one’s more obvious as the refrain is very catchy and with a little luck, they will reach an audience outside Metal circles with this one. Very good.

Over a fat, steady and bouncy rhythm, “Has The River Run Dry” delivers a pomp-laden arrangement. It’s a mid tempo rocker, quite heavy with a slightly dark atmosphere and a memorable refrain to go with it. A good tune that doesn’t quite reach great. “The Armor Of God” is fast, kicking and hard where the big melodies and the sing-along soccer-refrain takes it down Power Metal lane. The neoclassical guitar solos, fast and blazing, will make fans of that stuff jump for joy. It’s a catchy little piece but it does nothing for me at all – not my bag what so ever. The in-your-face “MNFST” comes on heavy and punchy on a solid rhythm and contains shitloads of hooks and a chorus that’s catchier than catchy. It’s slightly Power Metal laden but mostly I see this as a heavy Melodic Rock tune with a Metal edge that even goes a bit progressive half-way through. Awesome stuff.

On a slow note, the heavy, dark and atmospheric “The War That Tore The Land” comes along, bringing a huge soundscape with it. It holds a big synth-intro but it turns into a edgy Metal track fast, on a tough rhythm and an epic arrangement. The “hallelujah”‘s that resonates throughout the song doesn’t bother me at all, which is weird because I’m usually allergic to religious stunts like that. The striking and memorable melodies that etches itself to the brain are the icing on the cake and makes the song a a winner here. Brilliant. The slightly progressive “Sail On” is a rhythmic piece that holds a mid to uptempo pace. It’s heavy and stompy with chugging guitars – the riff is amazing – a guitar solo that’s glistening and striking hooks everywhere that culminates in the brilliantly memorable chorus. It’s not poppy or radio-friendly by any means, but it sure do stick.

“I Will Follow” is pomp-laden Power Metal with a Melodic Rock twist. At the same time, it’s a bit mellow albeit with a bouncy rhythm but the refrain is more in-your-face and faster paced. It holds a good refrain and the tune is ok but it’s a bit too Power Metal for my taste. The title track is divided in two parts. Part one starts out pompous and symphonic before it continues as an acoustic guitar based ballad only for it to move into heavier territories with a dark ambience, full of strings and keys where the tempo is on the slow side. The tune then alternates between balladry and dark heaviness. The second part is an instrumental take on the song that continues to oscillate between the slow, dark, epic and heavy and faster paced Hard Rock. A solid tune that sure leaves a lasting impression and feels very dynamic. A perfect ending for a record like this.

The final judgement then: It’s better than I thought it would be – and less Power Metal. The Power Metal vibes are of course there, something that makes me having issues with some songs, but for the most, this is more classic Metal with some neoclassical undertones. Because Metal it is. It’s a heavy album, quite dark and sullen but with lots of hooks and memorable melodies everywhere – and catchy choruses. Production-wise there’s nothing to complain at at all, it’s crispy yet clean, edgy and powerful but also polished in the right places – and it works equally as good in the car or on the stereo as on any streaming device. Musically, these guys are as faultless as anyone can get and it’s a pleasure listening to the musicianship here – especially Grimmark’s guitar playing and Liljgren’s vocals. If it wasn’t for the too obvious Power Metal of some songs I would have swallowed this album whole-heartedly.