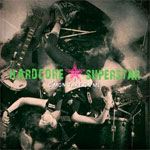 The last time Hardcore Superstar released anything new was back in 2010 and their awesome album Split Your Lip and with that album the band took a pretty hard turn and changed a few major things. First of all they hired a producer, a guy named Tobias Lindell who had previously produced other Swedish acts like Mustasch, H.E.A.T.  and Europe, with great results. But it must have been a major decision for drummer Adde Magnusson and bass player Martin Sandvik to give away the job that they have had on their earlier releases to an outside voice. In my book, Split Your Lip became Hardcore Superstar’s finest effort to date much to the fact that the sound was much more comfortable to listen to than the earlier drums-in-your-face production and way too loud mastering. Of course, the songs were also the best they had written so far. Which meant HUGE expectations when they now set a release date for their new album, their ninth.

Their new album was preceded by two singles, both increased said expectations. First song out was “One More Minute”, an extremely catchy rocker that has big pop influences. The song really should have been a monster hit. The second single was “Above The Law”,almost as brilliant and with almost the same pop feel. So, with these songs in mind and high hopes for a new killer album, I let the album run through my earphones. The first thing that struck me after one listen is that the album sounds very good!  I was a bit worried about that, as word came out that the band would be handling the production duties themselves, but the sound is pretty similar to its predecessor, only a bit thicker. First song out is “Cutting The Slack”, a two-minute long intro, that is more an instrumental song than an actual intro. It’s weird, but really quite good. The title track follows and it is a classic HCSS track, it’s pretty good but doesn’t really stick, said singles follows and we don’t need go get into them again, before one of the cooler tracks on this album comes along, “Stranger Of Mine”. It’s a jazzy ballad on the darker side and it is a stunning one. “Won’t Take The Blame” is great, quite commercial with a big hook and it sounds a lot like Crashdiet. But why split the song in Pt 1 and Pt 2 when Pt 2 is just the chorus of the song as a outro? Totally unnecessary. “Because Of You” is total 80’s arena rock – Crazy Lixx meets HCSS if you will and “Long Time No See”, which closes the album, is a fantastic ballad that lands somewhere between Aerosmith’s “Dream On” and W.A.S.P.’s “Forever Free”.

If this album is better than Split Your Lip is too soon to say, the album grows on you big time even though it was great after the first spin, but as for now my judgement is “almost up there”. If this album will work for the HCSS diehards, I’m not too sure. After all, this album is more hard rock and less metal than say their self titled black album or Dreamin’ In A Casket, but it feels like this is the path they have been taking after each record up until now and some people might have a problem with their more rockier sound. As for me, I praise it. This is exactly how I believe this band should sound.